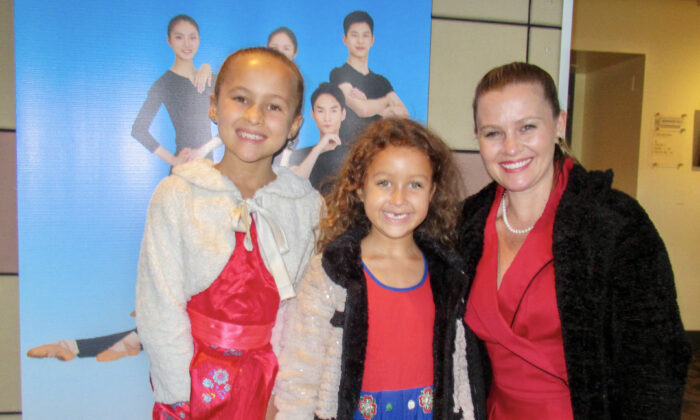 Judson-Yager, a professional actress, says she is, first of all, a mother and she had brought along her two daughters to see Shen Yun at the Fred Kavli Theater.

Judson-Yager is known for her role in “Bring it on: Again,” a cheerleading movie. But she has also played in “Minority Report,” the TV show NCIS, and has taken part in a number of TV commercials.

“I would just like to come every year,” she said, explaining how she was entranced the first time she saw Shen Yun two years ago.

“The colors and the choreography and the formations get me every year,” Judson-yager said as she recalled the fans and the spiral formations of the dancers.

Shen Yun presents China’s 5,000 years of traditional culture from the pre-communist era, as well as scenes from modern China. The stories, portrayed by the dancers, are based on the essence of Chinese beliefs, such as Taoism, Buddhism, Confucianism, and man’s divine connection to the heavens.

I want to believe so strongly in the arts and what they can do for our heart and soul, and for the connection of all of humanity.
— Anne Judson-Yager

“That is why I bring [my daughters] and that is why I come myself … because I want to believe so strongly in the arts and what they can do for our heart and soul, and for the connection of all of humanity. So, to bring back ancient heritage and culture and tradition and passion, and bring it to the world is one of the things I want to share with [my daughters] over and over again,” she said.

“I think everybody has their own understanding and language around creation, and the fact that we are all from the same place—we all just have different language around it,” she said.

“I never underestimate the power of art … and when you can combine aesthetics and the gorgeous experience of color with music, dance, and storytelling … they did such an incredible job having the announcers tell the story so that you understand a little bit but then you also get to experience the story. They really put it together very well,” she said added.