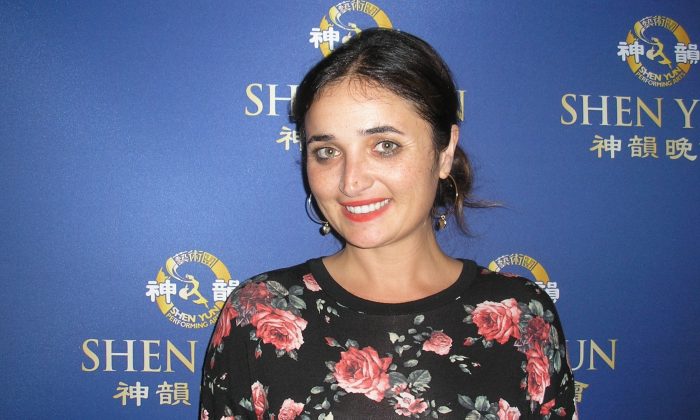 LONG BEACH, Calif.—”A divine renaissance is happening with the help of Shen Yun,” said Fadik Arasoy, “in a very artistic, beautiful, and graceful way!” These were her first thoughts when she saw Shen Yun Performing Arts World Company on closing night, Feb. 8, at the Terrace Theater.

Born in Istanbul, Turkey, and coming from a family of actors, Ms. Arasoy has achieved success in many ventures.

She is a movie actress in her own right, but that is only one of the hats she wears. Ms. Arasoy is a producer, writer, and co-founder of the Los Angeles-based entertainment company Red Case.

The New York-based, non-profit Shen Yun has become a worldwide phenomenon, captivating audiences across the globe, and performing an all-new program each year. Audiences around the globe give Shen Yun glowing reviews.

“I love the show, I really like the message,” Ms. Arasoy continued, “and the philosophy, and the performance is brilliant, the dancers are brilliant.”

“Entirely non-profit, and independent of the Chinese regime, Shen Yun enjoys the artistic freedom of New York, enabling it to now bring these ancient traditions to the stage. Shen Yun and its mission have drawn top talent from around the world; many artists are winners of international competitions in dance, choreography, and music,” explains the Shen Yun website.

“It is wonderful to see the cultural heritage that China has,” she said, “as I was watching the moves—I am from Turkey—there are art types, the similarities that we have in both cultures, dance and art can dissolve any prejudice. It is beyond words.”

Shen Yun’s website provides a fount of insights into the beauty of ancient Chinese culture and Shen Yun’s mission. “Throughout history almost every culture looked toward the divine for inspiration. Art was meant to uplift, bringing joy to both the people who created and experienced it. It is this principle that drives Shen Yun performers and their art,” explains the website.

“I totally believe the divine renaissance is happening,” Ms. Arasoy added, “and this show has to be all around the world to lift up people.”

“It is very encouraging for the audience to connect with the truth—it is full of art, beauty, compassion, discipline. I’m so happy I am here tonight,” she continued.

Shen Yun brings together incredibly talented artists in every area to create their performance, with world-class dancers, vocalists, musicians, and a digital state-of-the-art backdrop they bring to life mystical realms as well as many regions and dynasties of ancient China.

“I really liked how it combined the backstage screen, and real illusion,” she explained, “technically it was really well done, and the timing of the technical harmony, between the lighting, music, and orchestra is amazing. Such a beauty, they played it beautifully—everything was perfect!”

“I love the lyrics, I can feel the grief,” she said, “but that grief doesn’t come with anger, it comes with compassion, and there is hope behind it, there is a calling behind it.”

“It is beautiful, beautifully done, the sopranos are great,” Ms. Arasoy said enthusiastically.

The company website talks about their vocalists, “The song texts the singers perform are original works written for these pieces. Brimming with philosophical reflection about human life and containing deep layers of meaning, the texts go beyond the boundaries of nation, race, and culture, and have been fondly received and appreciated the world over.”

Ms. Arasoy understood the reflections of the music.

“I felt joyful, it just opened up my heart, made my heart bigger, gave me more compassion, I felt like I was in China in all times,” Ms. Arasoy exclaimed. “I dived into the history, I felt that feeling of being one, surrounded by art.”

The costumes were yet another aspect that excited Ms. Arasoy.

“China is famous for their silk, you can see the colors, the combination of pink, green,” said Ms. Arasoy, “it is colorful, beautiful, it is like watching nature, full of dance, wonderful. I like every piece of it!”

Special attention is given to each costume, explains the website: “Every detail is given meticulous attention and is a result of artistic inspiration and careful polishing. The designers stress harmonic balance and contrast. Their objective is an authentic presentation of the attire that comes from China’s divinely inspired traditional culture, and a consummate stage effect.”

She spoke glowingly of the vignette Handkerchief Blossoms, a segment where the return of spring is heralded with a lively and bold dance.

“When they were dancing with the handkerchiefs,” she said, “it was very touching to me.”

She said all the performers had done a “great job.”

Ms. Arasoy was intrigued by the segments in Shen Yun about Falun Dafa, a meditation practice the communist regime has severely persecuted since 1999.

“I am an actress and a novelist, I like to sometimes refer to dance, but I want to know China’s philosophy, meditation, which people are not allowed to do it anymore,” she said.

“I am going to make some research about it, learn about it. It teased me to learn more about it, [Falun] Dafa,” she added.

Shen Yun Performing Arts closed on Feb. 8 in the Greater Los Angeles area, having played to all sold out shows in this area.

With Reporting by Mandy Huang and Cheryl Casati