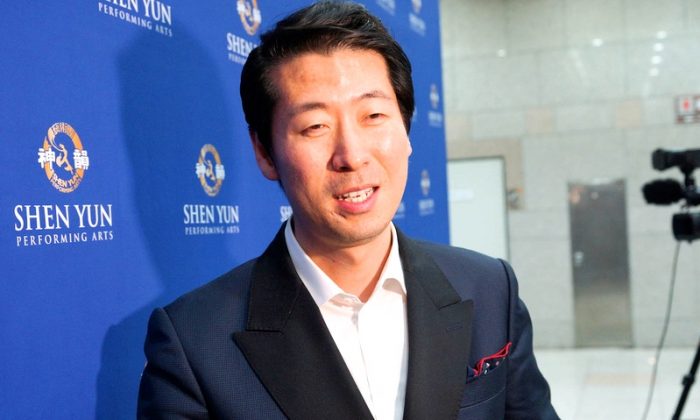 After enjoying Shen Yun, Mr. Go said he was bestowed a precious gift at the performance. He said though the cultures of China and Korea originate from the same root, Shen Yun performance is completely different from Korean performances. “It’s very unique, quite extraordinary,” he explained.

He was especially impressed by the technical skills of the dancers. “The spinning movements were amazing. They spun dozens of times at one time. Wow! It is the first time I’ve seen such a show. And the jumping movements, wow! How can they jump so high with such gentleness and softness,” he said.

He finds that classical Chinese dance is “both masculine and tender. The two feelings blend together.”

He was impressed by the female dancers as well. “The dancers are like fairies descending from heaven. They are very beautiful, graceful, and elegant,” he said.

In less than ten minutes each, Shen Yun dances recount ancient myths, bygone heroes, or celestial paradises. Whether set in the past or in contemporary China, every dance embodies traditional Chinese values.

Mr. Go recognized the stories from Chinese literature, “The stories of the Three Kingdoms and Journey to the West are vividly represented with the art form of dance. I thus can recall the Chinese history in a very short time. It was really a wonderful time for me.”

Mr. Go said that he will recommend Shen Yun to his friends, telling them, “Shen Yun is such an outstanding performance.”

“It is the first time I see such a performance. For me, it’s very fresh, special, and very great,” said Mr. Kim Yeong Gyun, a South Korean writer and the author of The Code of Umbilical Cord.

As a writer, Mr. Kim is discerning about the effect produced by art. He especially feels that the effect of Shen Yun’s performance is far exceeding the power of words. “Since I’m a writer, I find that the way Shen Yun combines music, fine art, and dance is really very refreshing and wonderful for me.”

Mr. Kim was particularly impressed by The Fable of the Magic Bush. “As a writer, we can express our thoughts by words. However, this magical brush can influence all things and even solve problems of different situations,” he said.

While the magical brush can turn anything it paints into reality for the good young painter, it is not so for the thugs who stole the brush. “When bad people use the magical brush, it results in bad consequences. The idea is very good and creative.” Mr. Kim said.

He said that when he watched other shows before, the shows left nothing after they finished, but Shen Yun is different. “The effect [of purifying] will be felt over time.”

He explains that all people can be inspired by Shen Yun whether they feel it immediately or gradually. “It’s like our taking medicine. The effect comes fast for some people, but slow for others.”

Mr. Kim said that all the Shen Yun programs are fabulous. All have their own characteristics, he says, seeing Shen Yun gives him a new vision and a wonderful night.