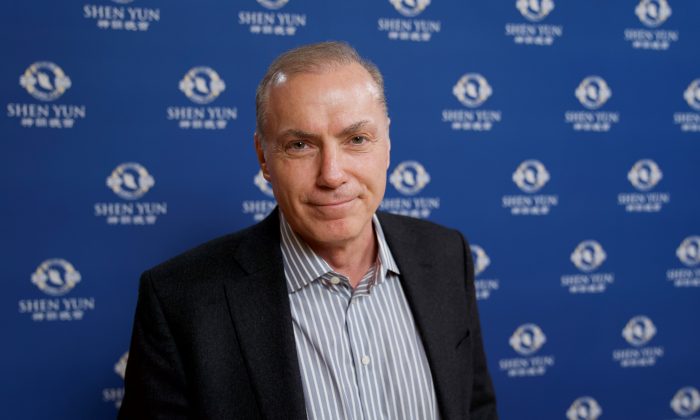 NEW YORK—Actor Al Sapienza hadn’t a specific idea of what sort of content Shen Yun Performing Arts would present, but after the two hour performance, he’d been shown the Ming Dynasty to the Mongolian grasslands to a palace on the moon.

“It’s brilliantly presented,” said Sapienza, who attended the matinee at Lincoln Center with his daughter.

“It’s really fascinating and I recommend this to anybody. I took my little 5-year-old, she’s loving it,” Sapienza said. “This really is amazing. The dancing is superb, the choreography’s superb, and it takes you through this historic journey of Chinese culture.”

“China [has] thousands and thousands of years of culture; the world should know about it,” he said.

Sapienza is best known for his roles in the HBO series “The Sopranos” and Netlfix’s “House of Cards.”

Sapienza, like many audience members, was sad to hear that New York-based Shen Yun is not allowed to perform in China.

Shen Yun was formed in 2006 by artists who wanted to revive the authentic traditional Chinese culture—which is exactly the culture the communist regime in China has been trying to silence and stamp out for decades. China was once known as the Divine Land, steeped in faith and belief in the heavens, but all that changed when communism came into power.

But Shen Yun artists are not the only ones who are optimistic about art’s power to connect us to our traditions and culture—many audience members Shen Yun inspires feel the same.

“I think it’s [Shen Yun’s] going to spread this culture all over the world, let people from every other country see what they didn’t know,” Sapienza said.

He wished Shen Yun success and hoped those trying to silence and shut down the company would cease their efforts.

“When tyrants and dictators take over, the first people they kill are the artists, the authors, the singers, the poets, it’s the first people they go after, because those are the people that are expressing the soul of a society,” Sapienza said. In China, this was the Cultural Revolution in the 1960s and ’70s.

“You should be able to express whatever you need to express, and the government shouldn’t stop it,” Sapienza said.