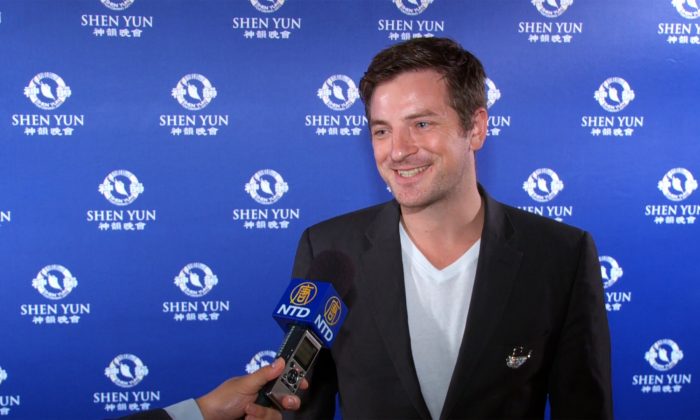 MELBOURNE, Australia—Luke Maizey, an actor and presenter from Melbourne, found Shen Yun Performing Arts to be spiritually enriching after he watched the performance at the Regent Theatre on Feb. 16.

“I was like, ‘that really is a brilliant production.’ I need that in my life,” he said.

With a range of acting roles in film and on TV, such as “Tomorrow When The War Began,” “Winners and Losers,” and “Neighbours,” Maizey appreciated the passion, technique, and message displayed by the Shen Yun dancers on stage.

“Through the passion of the dancers themselves, you could see that they were like, ‘I really want you to understand what we’re getting out here,’” he said. “Especially with the more modern pieces that they had in there.”

New York-based Shen Yun Performing Arts showcases traditional and modern stories of China through a series of vignettes. Stories ranging from the Imperial Guards and Mongolian warriors, to a persecution in modern China are shown.

“I wasn’t expecting the series of short stories that they have, which was like a really good breath of fresh air. I enjoyed it,” Maizey said.

The modern piece about the persecution of practitioners of Falun Dafa—a spiritual practice based on the principles of Truthfulness, Compassion, and Tolerance—in modern China, stood out for Maizey.

“We can express ourselves in anyway we choose, and there’s very little repercussions or persecution. But over there [in China], where things are a little bit different, there’s a struggle just to be who you want to be, and I think they did that really well.”

Shen Yun’s mission is to revive traditional Chinese culture—a culture believed to be divinely inspired. According to the Shen Yun website, China’s 5000-year-old heritage was nearly lost under the communist regime. Shen Yun aims to revive this authentic culture and present it to the world.

After learning that Shen Yun could not be shown in China, Maizey was more appreciative of having seen the performance.

“When the emcees announced that you can’t actually see this in China, [it] made you really appreciate that you’ve come down and done it.”

Maizey felt connected to the spirituality presented in the performance.

“To be able to be enriched by someone else’s spiritual beliefs, I find that really enriching for my own soul,” he said. “I’m really appreciating it when someone can do that for me.”