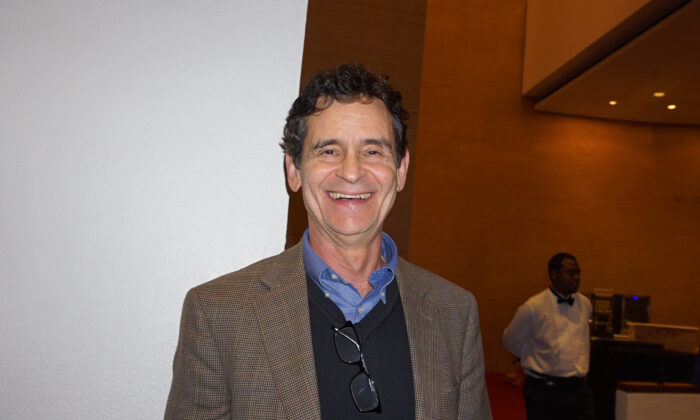 HOUSTON—One of Houston’s veteran stage actors, Ric Hodgin, was on hand at the Jones Hall for the Performing Arts on Dec. 29, 2019, not to perform but to take in a Shen Yun Performing Arts show with his family.

Hodgin, who also serves as the operating director at The George Theater in the city, said he very much appreciates the unique stories the New York-based classical Chinese dance company presents and what’s required to put on a Shen Yun production.

“I’m extremely, extremely impressed with what it takes to get to this point—all the hours and hours and hours of rehearsal to keep it there. And to be in sync, and to be perfectly on time. The balance, and everything, it’s just amazing,” he said.

Shen Yun’s mission is to revive China’s authentic culture from near extinction. Since time immemorial, Chinese sages have observed divine inspiration and the harmony between heaven and earth. Shen Yun depicts these spiritual beliefs on stage. Some audience members report seeing divine beings during a Shen Yun performance.

I think that any art that reaches its pinnacle is divinely inspired.
— Ric Hodgin

Hodgin said he believes that heaven plays a role in the life of true artists.

“I think that any art that reaches its pinnacle is divinely inspired. And I think there were moments that were very well reached here. It’s very difficult to reach the top of what you’re trying to achieve without divine purpose and help.”

Hodgin added it was difficult for him to get past the fact that what he was seeing on stage was a human feat. He spoke of the artistic process that high-level performers must undergo “in any art form whether it’s painting, whether it’s dance … whether it’s singing or acting—when you release your self and begin to surrender to the art.”

Shen Yun draws on China’s vast, 5,000-year-old civilization to present soulful legends and scenes, as well as modern tales of virtue and compassion.

The actor took an interest in the unique instruments in Shen Yun’s orchestra.

“It’s inspiring. The music itself is inspiring,” Hodgin said.

The Shen Yun orchestra is unique for its successful blending of Western orchestration with Chinese instruments and melodies.

According to Shen Yun’s website, “Traditional Chinese music emphasizes the expression of inner feelings—the ancients always used musical instruments to relate their states of mind. Western music, meanwhile, focuses on the overall effect of the musical ensemble—and to achieve that, arrangement and harmony are of utmost importance. Shen Yun’s music combines these approaches to capture the essence of both East and West.”

Hodgin can clearly imagine the immense amount of effort it took Shen Yun’s artists to put on their performance.

“Oh, heavens! First of all, in order to get the individuals trained to a point where they can start performing, and then to keep the performance at a level, is mind-boggling how much time that must take. And I’m sure within each touring company because there are seven of them, there are specific leaders in each form that practice, practice, practice.”