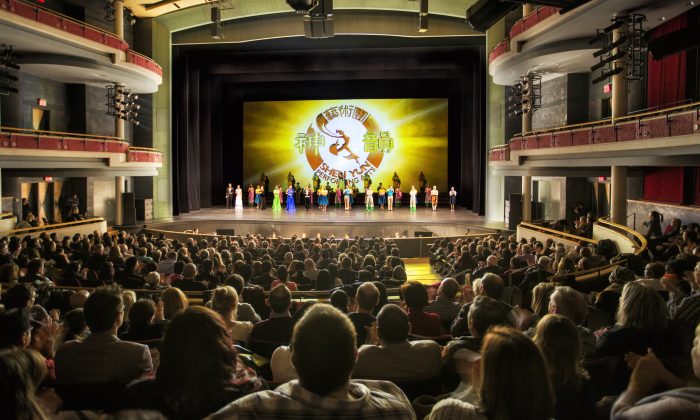 The cast of Shen Yun Performing Arts takes a curtain call after a full-house performance at the Living Arts Centre in Mississauga on Saturday, Jan. 17, 2015. Having finished its run in Mississauga, Shen Yun plays six shows at the Sony Centre in Toronto from Jan. 21-25. (Evan Ning/Epoch Times)
Company

MISSISSAUGA, Canada— Glenn Chipkar and Vivianna Castell know something about music and dance, being talented entertainers with a magnetic stage presence and a lengthy list of accomplishments.

So it was with a professional eye that they enjoyed Shen Yun Performing Arts on Sunday afternoon at the Living Arts Centre along with a full-house audience.

Ms. Castell has been singing professionally from a very early age, performing in musical theatre, private shows, commercial jingles, and on radio and TV.

She discovered over time that she most enjoyed live performances. So the award-winning singer and dancer, originally from Mexico, was thrilled to see Shen Yun’s breathtaking classical Chinese dance and music production on stage.

“It was fantastic, absolutely amazing,” said Ms. Castell. “I think it is a beautiful way of storytelling, saying it with your body and with the outfits. It was just fantastic.”

She was accompanied by her boyfriend, Mr. Chipkar, an acclaimed Toronto singer, songwriter, and producer of big band shows and many top-40 charted pop songs. He has achieved international recognition for his work.

Mr. Chipkar is also an elite athlete—a former world-record holder and national multi-gold medalist for the Canadian Masters Track and Field Team—who only a few days ago set a new Canadian Masters record in the 50-metre hurdles for men between the ages of 55 and 59.

“I think they did a great job,” Mr. Chipkar said, complimenting the music of Shen Yun. He himself has sold out shows at Toronto’s historic Palais Royale and other venues, including the Living Arts Centre itself.

“They are original compositions, and the combination of the Western instruments with the Chinese instruments, it was just such a beautiful sound—it was like nothing else I have ever seen before,” Ms. Castell added.

Shen Yun, founded in 2006, has taken on a mission of reviving the authentic five-millennia-old traditional culture of China, believed by the ancients to be inspired by the divine.

Through classical Chinese dance at its core, along with Chinese folk dance and ethnic dance, story-based dances, and a unique orchestra that harmoniously blends together Western and Chinese instruments, Shen Yun’s productions take the audience on a journey through legends and stories across 5,000 years of Chinese history.

“I was impressed by the positioning of the performances and the interactions with the screen, and the way it was just so well thought out from the beginning,” Ms. Castell said.

The screen in question is Shen Yun’s state-of-the-art digitally animated backdrop, an innovation in dance performance pioneered by the renowned performing arts company.

Providing striking background scenery, it not only coordinates with the dancers on stage, but also the brilliant colours of the costumes, the choreography and story being presented in each dance, the lighting and visual effects, even particular notes of the orchestra.

In some of the story-based dances, characters literally leap into the screen from the stage or leap onto the stage from the screen.

“That interaction gives it a playful, almost animated feel,” Mr. Chipkar said. “I thought that was really cool.”

“The way the performers delivered it was just beautiful—it was perfection,” said Ms. Castell.

“That was one more element to incorporate,” she added.

“You have a live orchestra, live musicians performing, the dancers, they can’t see them [the orchestra], they are just listening to the music, and then the interaction with the screens, it was just so well coordinated.

“It was just fantastic!”