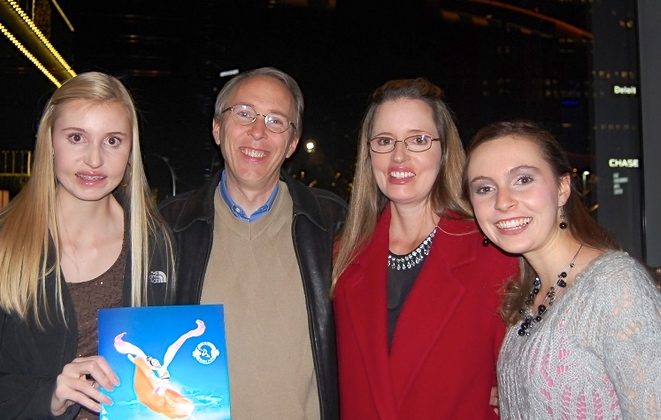 DALLAS—Mark and Michelle Arnold saw Shen Yun Performing Arts with their daughters at the Winspear Opera House in Dallas, and they went on a “journey through the ages of China,” Jan. 3.

“It’s classical dance at it’s finest,” Mrs. Arnold said. “It also shows the culture of China as well as the history of China.”

“Loved the costumes, and the drumming was magnificent,” Mr. Arnold added.

Mr. Arnold is an acclaimed corporate speaker and brand expert who lectures frequently to company executive teams and boards of directors. After leaving his position as a senior vice president of a multi-million financial institution, Mr. Arnold founded his own consulting firm, On the Mark Strategies.

Through stunning, animated backdrops, classically trained dancers, and a unique orchestra blending East and West, the New York-based Shen Yun revives 5,000 years of Chinese civilization. The divinely inspired culture was once almost lost due to years of communist rule in China.

The couple said having experienced the display of traditional Chinese culture presented by Shen Yun, they wanted to learn more.

Mr. Arnold said the performance brought him joy, and he wished it was something that could be presented in China.

The couple concluded that they wished to let the performers know how much they appreciate Shen Yun sharing the traditional Chinese culture, as well as their time, energy, dedication, and passion.