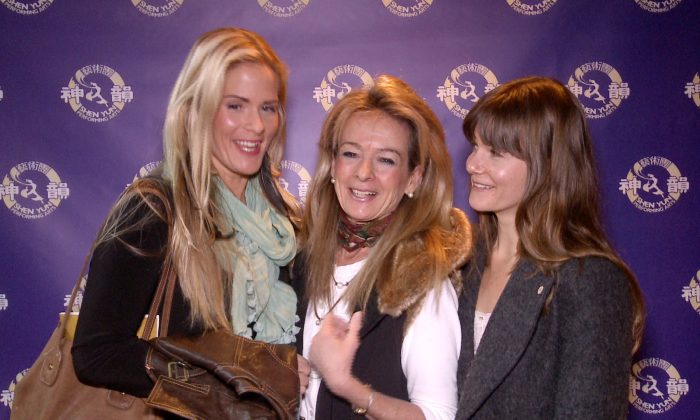 HAMILTON, Ontario—Trisha Romance is one of Canada’s most successful artists, an award-winning painter inspired by the divine.

It’s a connection she shares with the dancers and musicians of Shen Yun Performing Arts, a classical Chinese dance company founded on a mission to revive 5,000 years of divinely inspired Chinese culture.

On Sunday, Ms. Romance took in Shen Yun’s final 2014 performance at Hamilton Place Theatre, bringing with her two talented daughters and leaving with a new-found affection for China’s cultural heritage.

“It was true art and true artistry because it had colour, it had form, it had, of course, amazing storytelling, and awe. It had the power to awe. That is great artistry—art at its best,” she said.

Romance was born American but turned down scholarships to art schools in New York and Pittsburgh to become the first American student at Sheridan College in Oakville, Ontario, in 1969.

She’s since been claimed by Canada, and made a member of the Order of Ontario and winner of the Canadian Artist of the Year Award four consecutive years from 1995 to 1998. In 2010 she carried the Olympic Torch through her adopted home of Niagara-on-the-Lake, where she also owns an art gallery.

Feast of Colour and Animation

Ms. Romance said the rainbow of colours presented by Shen Yun shocked her.

“These are things we see in our dreams. It’s not something you normally see on stage,” she said.

She said colour is important to a story, to give a sense of light or sadness. It’s also important in art, and she praised how Shen Yun used colour in its performance.

Those colours, designed with an emphasis on harmonic balance and contrast, are found in Shen Yun’s originally created costumes, hundreds of pieces made for each year’s all-new world tour.

The colours are also present in Shen Yun’s vividly animated projected backdrop, a living setting that complements and synchronizes with each dance number. Shen Yun’s backdrop extends the stage to scenes of earthly and heavenly realms.

“I was blown away first of all by the use of animation,” Ms. Romance said.

“I was shocked in the first scene,” she noted, referring to a grand display of magnificent deities in a golden paradise in the opening piece that made her nearly jump out of her seat.

“In fact, this is really funny: after intermission, I kid you not, I came back and I almost went to put my seatbelt on. … That goes to show you how much it was capable of lifting you out of your seat.

‘Amazing all the way through’

But it wasn’t just the opening scene, or one particular piece. Ms. Romance said she was left in awe throughout the 20 musical and dance pieces performed.

“It was just amazing, all the way through. You didn’t know what to expect next. … They have the ability to keep you on your feet the whole time, like ‘What next, what could possibly happen next?’”

Shen Yun stages performances of mainly classical Chinese dance, an art form passed down and enriched for thousands of years in China, dynasty after dynasty.

Rather than one or two dancers on stage for a piece, Shen Yun features large-scale dances. Overall, the entire cast of performers includes some 100 dancers, singers, and musicians. That scale of talent impressed Ms. Romance.

Shen Yun’s foundational mission, to revive the Middle Kingdom’s true cultural heritage, is a direct response to the ongoing loss of that culture today.

After 60 years of communist rule in China proper, the empire once known as the Land of the Divine has seen its greatest cultural achievements lost, particularly during the decade-long Cultural Revolution that began around 1967.

Shen Yun’s performances draw on China’s rich heritage in an effort to revive it and share it with audiences around the world.

“It gave me a deeper sense of Chinese culture,” said Ms. Romance. “Very spiritual message, actually. It was wonderful to see the freedom that they were able to express about spirituality and I appreciated that as well.”

She said she enjoyed the storytelling of Shen Yun’s mini-dramas, dances that capture moments from China’s most memorable stories: historical, literary, and mythological.

“I was so in awe of just the actual language itself and the culture,” she said.

“And perfectionism, because I appreciate precision in art and so to see the perfection that is happening there … it had the power to awe and that was what was so incredible about it.”

Ms. Romance enjoyed Shen Yun’s orchestra and noted it was her daughter, Whitney Peterson, a musician herself, who bought her the ticket as a Christmas gift.

The solo performance by erhu virtuoso Mei Xuan was one of Shen Yun’s standout performances, she said. While she could not remember the exact name of the instrument, she couldn’t forget the sound.

“When I found out there’s only two strings in this instrument that could create this kind of emotion and sound. … The orchestra was wonderful but to hear this—again, I learned something today that I didn’t know before coming here and that’s amazing.”

Ms. Romance said there was “an incredible amount of work” that had gone into the performance that night.

She said she was sure there were little children in the audience who greatly enjoyed the show.

“It has this wide range to be able to entertain a wide range of ages, from the young right to the old, old, like me.”