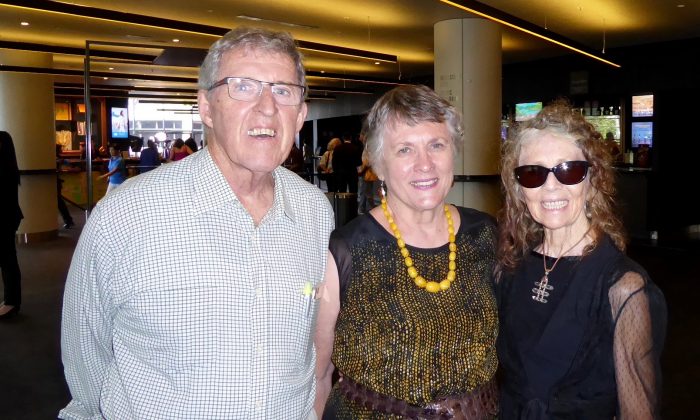 SYDNEY, Australia—Beauty and truth have figured largely in the life of acclaimed Australian artist, Pamela Griffith.

“I thought it was very beautiful and the message it had to carry was one of goodness and honesty. My aims are much the same as the aims in this performance—beauty and truth.”

Sydney’s Lyric Theatre drew a full house, a grand Australian tribute to the world-renowned classical Chinese dance and music company for travelling Down Under. The company will now continue with performances across Asia.

“Sophisticated dance techniques, an orchestra joining instruments from both the East and West, beautiful costumes, and a stunning back drop—this is Shen Yun at first glance,” the company website explains.

“Dig deeper, one discovers a sea of traditional Chinese culture. Mortals and divine beings merge on stage as one. Principles such as benevolence and justice, propriety and wisdom, respect for the heavens, and divine retribution, all come to life, washing over the audience,” the website says.

Ms. Griffith, her husband, Ross, and a family friend, Jennifer Porter, enjoyed the extraordinary performance from beginning to end.

“I liked the combination of traditional instruments with classical music. I thought the sopranos sang magnificently, and I think that it was wonderful to see traditional Chinese dance and how it’s affected and influenced Western culture.”

Ms. Griffith said the lyrics of the songs were not as important to her as “the beauty of their voices,” she said.

The primary trait that distinguishes the singers of Shen Yun is their use of bel canto technique to sing Chinese text, the website says.

“This means that the singer must, while continuing to meet the challenges inherent in bel canto technique, retain proper Chinese pronunciation and diction. Today, these singers’ ability to do this is unparalleled.”

As an artist, Ms. Griffith was captivated by the colourful array of the Shen Yun costumes.

“I thought that they were really wonderful, … I liked the modesty of them. I think the difference in Chinese appreciation of colour is very interesting to me as an artist because the Chinese people seem to love contrast, whereas we like harmonious colours, and so it was a very colourful spectacle.

“The effect was beautiful and beautifully coordinated, and I can’t say which group was better than another because all of the costumes were good.”

“These materials were really beautiful, and the use of them was lovely. I liked the very light-weight fabrics which enabled the girls to move so gracefully and to show what their movement was doing to the air around them by the ribbons that floated, and so on and so forth,” he said.

“Quite spectacular. I think the colour that my wife refers to really was a very great surprise to me … very, very spectacular. I don’t like a combination of orange, lime green with a purple cummerbund, but I thought [that] was an outfit that was really was spectacular, but uncommon for the Western view of colour.”

“I thought often the women were limited by the dresses all the time, big dresses, but I liked the women dancing and the expansiveness. I liked it when the girls jumped also, and the sleeves.”

She said classical Chinese dance gave the performance authenticity, the only company of its kind in the world.

According to her own website, Ms. Griffith, nee Gittoes, was born in Australia into an artistic family.

“She trained as an Art Teacher at Sydney Teacher’s College and East Sydney Technical College and received the Art 1V Prize for first place throughout the course. At a later date she completed a Bachelor of Art (Ed) at Alexander Mackie Art School, Sydney.

“She has taught in secondary schools, technical colleges, colleges of advanced education, universities and privately in her own studio and numerous community workshops throughout Australia.”