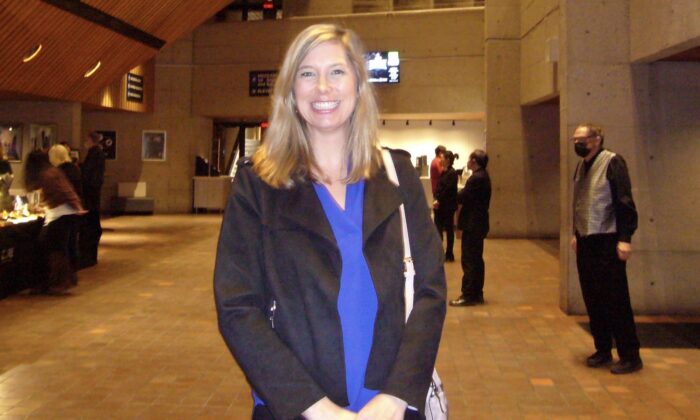 HAMILTON, Canada—Each culture has its own legend of how the world came to be. Traditional Chinese culture attributes the creation of the world to multiple deities. Shen Yun Performing Arts uses dance and music to bring these legends to life.

Amy Swanson, vice president of government affairs for Ontario with Medtech Canada, the national association representing the medical technology industry in Canada, shared her thoughts on Shen Yun‘s portrayal of how civilization began.

“I love this idea of the gods coming down and creating this beautiful civilization that is so rich in history and culture. I like it a lot. I don’t want it to be just one version of how the world came to reality. I love this idea, this very spiritual version of the creation of Chinese civilization. It’s wonderful,” said Ms. Swanson after seeing the performance in Hamilton on March 23.

She said she found the performance “breathtaking.”

“It is absolutely stunning. It’s the colors, the music. It’s so expressive, a story without words. It’s gorgeous, just amazing.”

Based in New York, Shen Yun is dedicated to reviving China’s 5,000-year-old culture. During the past 70 years, China has been under the rule of communism, which led to the erosion of the country’s age-old culture and traditions. Shen Yun depicts the essence of the culture, including its divine elements and upright principles, before the communist regime took power.

“There are thousands of years of all that history and [people] need to see it. I think it’s wonderful,” Ms. Swanson said.

“I know when I go home I’m going to go and do more research. I want to learn more, where did it come from? I want to know what’s the inspiration behind the music and the dancing. And so it makes me very curious to broaden my mind. I’m curious to know more.”

She added that people can only see China as it is now, but Shen Yun is reminding everyone of how glorious the Middle Kingdom once was.

“I think we don’t want it to be forgotten. We’re so saturated by media and news and you sometimes only get one perspective, and I hadn’t thought about what China was like pre-communism.”

Classical Chinese dance is the cornerstone of the performance. It is the epitome of China’s traditional aesthetics and one of the most comprehensive dance systems in the world. Its rich expressiveness makes it the perfect medium for portraying the array of tales, roles, and characters in Shen Yun’s of dance and music pieces.

“When I think of the context, dancing for the emperor, I just imagine all of these beautiful dancers performing at their very best, and such a big important event. It’s absolute perfection, not a step out of place, which is amazing,” Ms. Swanson said.

“It really is unique. I think of all the different dances I’ve seen and I didn’t know what to expect. I just knew that it was going to be beautiful, and it’s so graceful. The way everything is in perfect unison, it’s just spectacular. But they’re so athletic, they are such great athletes. And the way they can tell a story just by moving their bodies is just beautiful.”

Ms. Swanson recommends that everyone experience Shen Yun when they get the chance.

“One hundred percent go and see it,” she said. “It’s a feast for the eyes. It’s just all senses. I cannot look away. It’s amazing. I’ll be back again for sure.”