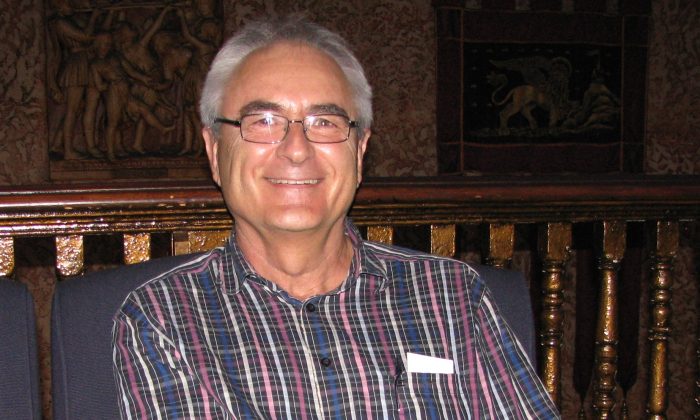 SYDNEY—Audience members were impressed by the cultural experience, compassion and skill displayed in the Shen Yun Performing Arts performance at the Capitol Theatre on Feb. 8.

He worked in China in the late 1980’s and returned recently for a holiday. He felt China was loosing their culture. “Very materialistic, not so much tradition anymore,” he said.

He said he could see traditional Chinese culture in Shen Yun. He could see joyfulness of life, compassion and understanding of people in many of the dances.

“I think it brought it through very clearly, a lot of the compassion is now lost. That used to be there as part of everyday life.”

The dancers were a particular highlight for Mr. Buschenhofen.

China’s 5,000 years of civilization is presented through classical Chinese dance, award-winning singers, digital animated backdrops and a full orchestra comprised of both Eastern and Western instruments.

“Extremely skillful! Very, very skillful! he said. “Their fitness, their coordination to the music and even to the backdrop is absolutely beautiful. It was mind-blowing, it was spectacular.”

Jeremy Yik, previously a dance and music critic is now an independent freelance journalist. He is most interested in the arts and specialises in writing about Australian Aboriginal indigenous art. He had also worked for the Hong Kong government.

Mr. Yik felt the values of compassion depicted in the piece The Power Of Compassion were quite unique to Shen Yun.

He enjoyed the combination of the backdrops and dancing.

The backdrops are also timed precisely to create the illusion the dancers can leap in and out of the screen.

“That was very technically wonderful. I was very impressed with that, [particularly] the underwater scene and the statue coming to life. Very clever, you know and very … perfect also. Very believable.”

Mr. Yik was referring to, The Fable Of The Magic Brush where a young painter befriends a mysterious maiden and defends her from a band of ruffians.

“I am impressed by the [dancers] skills and how they are trained to dance in perfect harmony with each other,” he said.

Both Mr. and Mrs. Martin said that it was very educational and felt it was important for everyone to learn about the Chinese traditional culture and keep the ancient values alive.

“It’s good to see that they maintain it [traditional culture] to keep it going,” said Mr. Martin.

He thought “it was quite sad that they could not perform in China.”

Mrs. Martin said, “It’s hard for us to understand the suppression.”

New York-based Shen Yun revives the divinely inspired Chinese culture through the universal languages of music and dance. Most of the traditional culture has been systematically destroyed since the Cultural Revolution. Many of the original art forms are not to be seen in China today.