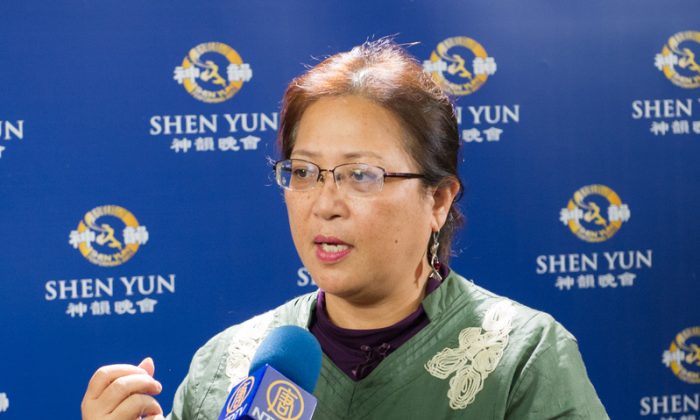 KAOHSIUNG, Taiwan—Over a 100 audience members from east of Taiwan showed up at the Kaohsiung Culture Center after a bus ride of more than seven hours for the Shen Yun Performing Arts performance. Among them at the matinee on March 7 was Ms. Kao Shu-Chuan, director of Chu-Yin Culture and Arts Troupe, an aboriginal singing-dancing group,

She had come to see Shen Yun the fifth time.

Ms. Kao said she’s been stunned by Shen Yun beauty each year. Each performance “is very unique and independent. The female dance performers appear very elegant; each dance move of the male performers, whether their eye contact or body movements, is of great accuracy.”

Shen Yun displays Chinese dances which are accompanied by the Shen Yun Performing Arts orchestra, a unique blend of Western and Chinese instruments, a state-of-the-art digital backdrop, vivid costumes, and music soloists round out the presentation.

Ms. Kao, an expert in Ami singing of the complex contrapuntal polyphony, highly praised Shen Yun music. “The feeling of being present at the show was stunning. Particularly the director, the music in the opening scene, wow! We started our trip here in the early morning. Listening to the music, I feel soothed, the magnificent air refreshing my cells.”

She was extremely touched by lyrics of the original songs the singers perform. She felt as if the vocalist integrated her singing, the music, and lyrics into one to form immense power that penetrated through her body. “With her voice strong enough, … she sang the feeling of each word to touch our hearts.”

Ms. Kao added, “When singing and interpreting the song, she conveyed what is behind the lyrics.”

‘I feel refreshed, soothed, and calm’

With her inner spirit being awakened by Shen Yun, Ms. Kao felt delighted and refreshed. “I feel refreshed, soothed, and calm after watching the show.”

Ms. Kao recommended Shen Yun to those who hadn’t yet seen the performance. “Sometimes, for it to touch the bottom of your heart, you have to experience it,” she said.