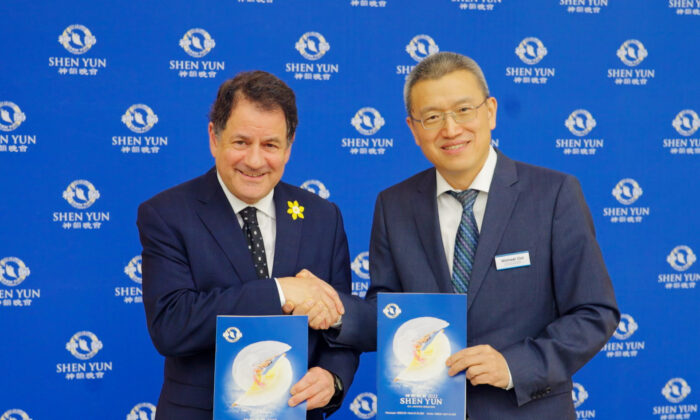 Toronto City Councillor James Pasternak (L) shakes hands with Michael Cui, one of the organizers who helped to bring Shen Yun to Toronto, at the Four Seasons Centre in Toronto on April 6, 2022. (The Epoch Times)

“It is both an honor and pleasure to bring greetings and congratulations on behalf of Mayor John Tory and my colleagues at city council to Shen Yun,” Mr. Pasternak said at the Four Seasons Centre in Toronto on April 6.

“I want to congratulate all the participants in this wonderful production. The directors, the dancers, the choreographers, the musicians that make this wonderful show a success, I wish you all the best in your journeys and your travels and the important message that you’re bringing. Thank you very much.”

New York-based Shen Yun, the world’s premier classical Chinese dance and music company, travels the globe to present an all-new performance to audiences in some 150 cities every year. The performing arts company aims to revive the traditional culture of China as it was before the Chinese communist regime all but destroyed it.

A Journey for the Mind

Paula Wilson, an accountant, came to see Shen Yun with her daughters.

“It was amazing, it was so beautiful. Just visually stunning, a breath-taking piece of artwork. We’re very happy that we came,” Ms. Wilson said.

“It’s such a treat, especially after two years of being stuck at home and not seeing anything. Especially the opening scene, my eyes couldn’t believe that it’s possible. … Almost brought me to tears.”

Ms. Wilson said she saw “so much hope” and “so much beauty” in Shen Yun, adding that the performance made her feel more “peaceful and calm.”

“Things have been very heavy for the past two years but this was like a journey for the mind to a different place. It was definitely very meditative just watching,” she said.

Tiffany Lister, a graphic designer and creative director, was impressed with the different mediums of art in the performance.

“It’s super colorful. … It’s all just very, very beautiful, and the tenor blew me away too,” Ms. Lister said.

Besides music and dance, Shen Yun boasts stunning handmade costumes, intriguing props, and a patented digital backdrop that allows for seamless interaction between the dancers on the stage and the vivid background scenery.

Referring to the storylines of the dances, Ms. Lister said she experienced a range of emotions.

“It’s funny, and it’s touching, and then it’s sad, and then it’s funny again. It’s a roller-coaster emotionally—pretty intense,” she said. “It’s wonderful.”

“It’s uplifting, it’s very enjoyable. What they do through dance, what they transmit in emotion and in love and compassion and everything else, it [makes you] feel very happy, very relieved,” said Mr. Ratusny, who is a deacon at a church in Barrie.

Ms. Ratusny said she usually gets headaches with the change in the weather, but Shen Yun helped make that discomfort disappear.

“[Shen Yun] is beautiful. I enjoyed every minute of it.”