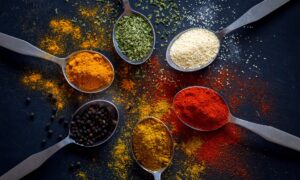 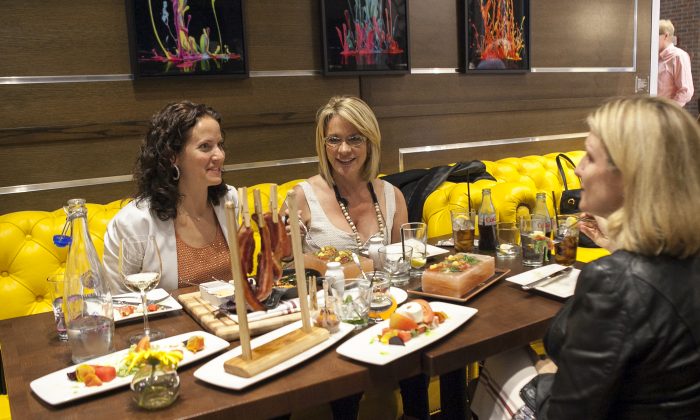 At David Burke’s fabrick, which opened this spring, the dishes pop off the plate, sometimes in an architectural fashion, and sometimes in ways that recall everyday objects.

Strips of candied bacon, in a black pepper and maple glaze, hang from a small-scale clothesline. A purse-shaped chocolate dessert hides inner layers of gianjuja mousse and raspberry ganache.

Was it tongue-in-cheek—for a restaurant named fabrick and located in the Garment District—to feature such dishes?

Langille said their vision was to capture the cuisine of New York City’s different boroughs in a small shared-plates format.

“We wanted to do the fabric of New York and New York cooking,” he said. “A little bit of every cuisine, but not fusion cuisine.”

There is an Avocado Panna Cotta ($16), a more upscale-looking version of a nachos dish, with the familiar flavors of guacamole, melted pepperjack, and blue tortilla chips, which make it both homey and addictive.

It’s also hard to go wrong with the classic flavors of the Burrata Salad ($18), with the creamy cheese perched on top of tomato slices, which in turn sits on a layer of prosciutto laid across the foundation of watermelon logs and green quinoa. Eating it feels much like deconstructing a building.

The presentation is sometimes whimsical, which will appeal to some and not others.

There are also dishes that are more straightforward in concept, and don’t aim to be eye candy.

A milder dish was the Asparagus & Wild Mushroom Pappardelle ($24). It’s made with an asparagus butter made from asparagus peelings. “David is a master of using scraps to make something completely new,” Langille said. Pickled beech mushrooms add some acidic notes, and Parmesan cheese also make for fine complements to the mushroom duxelles.

The burger is a no-frills classic, with a focus on the meat. The chefs tried out different samples (different ratios of cuts, different grinds, different aging) from various purveyors, eventually settling on Pat La Frieda’s ground brisket. A popular item, it is served with Burke’s steak sauce mixed with mayonnaise, bacon, American cheese, on a Parker House sandwich roll ($18).

The purse mentioned earlier, the Chocolate-Hazelnut Burke-n’ Bag ($14), is almost too pretty to eat, but for a chocolate lover, it is as delicious as it is handsome to behold.

Zac Young, the executive pastry chef for the David Burke group, trained in France under chefs including Philippe Givre at Valrhona and Philippe Parc at Chocolat Michel Cluizel. For another decadent dessert, try the Caramelized Peach Melba Donuts with a raspberry filling and nutmeg whipped cream ($21).

The restaurant is set on the ground floor of the boutique hotel Archer New York. The dining room has high ceilings and an open skylight, and provides a view into an open kitchen.

The feel is industrial but at the same time retro, softened with colorful accents.