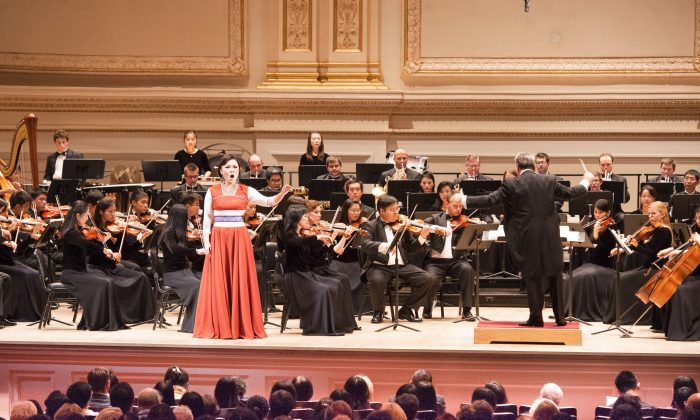 NEW YORK—With two performances on Oct. 10, Shen Yun Symphony Orchestra will bring a new sound to Carnegie Hall. Fast gaining worldwide recognition, Shen Yun’s innovation is not about breaking away from traditions, but precisely about combining traditions by perfectly harmonizing the sound of Western and Chinese instruments.

The symphony orchestra draws from the best musicians from the three touring companies of Shen Yun Performing Arts, which presents authentic Chinese culture through music and dance at Lincoln Center and other premier venues around the world every year.

Since 2012, the orchestra has been rearranging its original pieces to perform on its own in concert halls. This October it will tour the United States and Canada. In addition to its original compositions, this season’s program will include pieces by Tchaikovsky and Sarasate.

In interviews, Shen Yun musicians provided a behind-the scenes look at the orchestra based in upstate New York. The Bulgarian conductor Milen Nachev said, “If you take a look at the conductor’s score, not only vertically—like harmony, balance, orchestration—but also horizontally, we are using every single way to make the music more impressive. … We want to give the audience not only emotional pleasure, but the experience of discovering a completely different world behind the music.”

The Western instruments in the orchestra provide the foundation and backdrop to enhance melodies of ancient China with the distinct sounds of Chinese instruments—such as the “erhu” (Chinese violin), the “pipa” (Chinese lute), and the “gong.”

Achieving a seamless, harmonious blending of these two musical systems and combining instruments with such distinct timbres is no small feat.

A graduate of the St. Petersburg Conservatory in Russia, Nachev has had extensive experience interpreting music of different styles and composers from different centuries. He has conducted major orchestras in Eastern Europe, but he said none of them has been as diverse, as challenging, or as rewarding as Shen Yun.

He conducted 115 Shen Yun performances during last year’s season. The Shen Yun musicians are from Europe, the Americas, and Asia and speak various languages.

This year’s Chinese Moon Festival arrives in less than a week! What better way to celebrate than to experience the musical enactment of an ancient Chinese emperor’s dream—of beautiful dance and music on the moon? Listen for the plucked pipa (Chinese lute), which represents the dainty steps of the moon fairies, with the accompanying erhu, the two-stringed Chinese violin. And if that strikes your fancy, be sure to check out the Shen Yun Symphony Orchestra live during the upcoming October tour: http://sypa.us/1JCkVmt

Nachev said it’s very difficult to achieve the perfect intonation with any orchestra, and it’s even more challenging with Chinese instruments. Shen Yun has actually created exclusive arrangement methods to convey an ancient culture that was nearly lost in the past 60 years.

Nachev attributed the power of the music itself to the thoughts of the orchestra members. “Once the door of your consciousness is open, you can easily find the right tempo, the right articulation, and the right phrasing,” he said.

One of the orchestra’s composers, a China Conservatory and Oxford University scholar, Jing Xian said in the company’s introductory video, “As composers we need to have a foundation in both Eastern and Western traditions.”

The original pieces draw from a rich heritage of the Middle Kingdom’s diversity of over 50 ethnic groups and of dynasties spanning 5,000 years, ranging from grand imperial court music to lively, rhythmic folk tunes. Each dynasty used distinct musical forms. While rich in texture, the melodies are elegantly simple with identifiable beginnings, middles, and ends.

We want to give the audience not only emotional pleasure, but the experience of discovering a completely different world behind the music.
— Milen Nachev, composer

With its exquisite harmonization of Western and Chinese musical systems, and drawing from ancient Chinese stories, characters, and moods, Shen Yun is creating a new frontier in concert music.

Besides tapping into the rich content of traditional Chinese culture Shen Yun also focuses on reviving bel canto’s genuine high-note technique of classic Italian opera, forgotten both in Europe and in China.

Soprano Haolan Geng said, “It’s different from the bel canto used today, which has diverged from its earliest form. Shen Yun sopranos train in this classic method, meaning we vocalize and articulate from a different vocal position. Of course, it’s also harder to master because our lyrics are in Chinese.”

Shen Yun solo violinist Fiona Zheng shared her thoughts before her Carnegie Hall debut. She said, “Although our compositions are contemporary, they give people a sense of closeness to ancient China. For me, the music evokes early Buddhist and Taoist thought, and the ancients’ faith in the divine—it’s a very sacred feeling.”

The Chinese character of Shen translates as “divine being,” and Yun literally means “rhyme” or “rhythm,” but actually refers to the entire bearing of a person. The two characters combined can be interpreted to mean “the beauty of divine beings dancing.”

With its mission to revive traditional Chinese culture, Shen Yun looks back at a China that was once known as the land of the divine bestowed from the heavens.

Shen Yun has profoundly touched many people who’ve given rave reviews after performances. The music director of the New York City Symphony, David Eaton, said, “It was very uplifting and inspiring, and at times very deep.”

When asked about the most memorable moments while performing in Shen Yun, soprano Geng said, “Sometimes, if the theater is bright enough, I can see audiences wiping away their tears. I’ve witnessed this many times, and every time it’s really stirring to see it happening right before me.”

What happens to move the audience involves the Shen Yun artists working as one.

Sometimes, if the theater is bright enough, I can see audiences wiping away their tears.
— Haolan Geng, soprano

Nachev said that during rehearsal of a piece for three erhu soloists accompanied by the orchestra there was unspoken communication: “Just watching the eyes of the three soloists, I already knew what they needed—what kind of tempo they needed, what kind of support they needed, how we could develop the phrase together—and my feeling was that they also implicitly understood. When I desired to start the phrase from one point and bring the phrase to the arrival point, they were completely with me.”

Geng described how that spiritual exchange among composer, conductor, and musicians—transcending beyond words—is communicated to the audience.

“To reach a higher realm as an artist, I think morality plays a vital role. It’s about leading a life of integrity. If you go about pretentiously offstage, you won’t be able to express any sincerity onstage. When the sounds and feelings you let out are pure, your song will be able to truly touch your listener,” Geng said.

It may seem paradoxical how such a timeless art form as classical music can draw so much fresh inspiration from the past. Audiences have become accustomed to innovation in classical music involving the shattering of old forms. Given the audience reactions to Shen Yun, perhaps a wiser way to be progressive and touch audiences most profoundly involves looking back in time and across cultures.

Behold: The Purpose of Life. This Shen Yun original musical score features a soprano soloist supported by the orchestra. It explores the idea that the trials and tribulations of life are all for a higher purpose. #spiritual #enlightenment #soprano #LiveMusic #ShenYunlyrics #concert #ShenYunOrchestra #ShenYunMusic

Shen Yun may soon prove to be widely known as setting a new path for expanding on traditional concert music. When asked what the audience can expect, Nachev said, “I honestly believe that they will be surprised.”