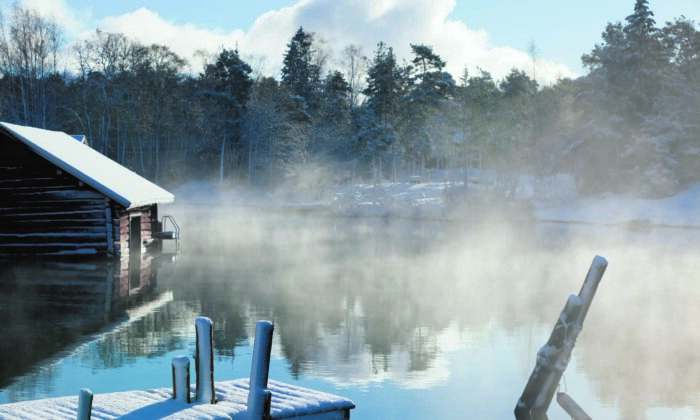 A National Passion: Sauna in Finland

Sitting outside, they steam. A whole line of them, leaning on railings and sitting on a bench, cold beers in hand, an incongruous sight here in the heart of Helsinki. While Saturday shoppers and happy couples and little families stroll by on the nearby sidewalks, decked out in casual yet practical Nordic fashions, these soggy, shirtless men with towels wrapped around their waists don’t seem the slightest bit self-conscious. In fact, if you look closely, they may be a little smug. After all, they’re perfectly at home, happily participating in Finland’s very favorite activity—sauna.

Soon, I will join their ranks. Accompanied by a tour guide to show me the ropes, we pass the line of men, the lot of them just momentarily getting a bit of fresh air before they head back into the dry heat inside. We enter Arla, built back in 1929. The guide explains that back in simpler days almost a century ago, the Finns enjoyed few luxuries—and heading to the community sauna was one of them.

“Sauna is a great equalizer, a leveler, everyone enjoys the heat and the steam,” he explains. And also, he adds, it’s an activity always enjoyed in the buff.

In Finland, sauna isn’t just a great way to warm up on a cold day—it’s a national obsession. In a nation of a little more than 5 million people, you’ll find some 3 million saunas (more than the number of cars on the roads). Individual hotel rooms have them, as do small studio apartments and even office complexes, perfect for workers to recharge the batteries and get their blood pumping.

Sauna is the sole Finnish word in common use around the world, and the typically stoic Finns open up once they get inside. Spouses looking for a favor from their partners will wait and ask during a sauna session, and politicians halted by a stalemate will crack it by getting inside together. They even have a phrase for it—“sauna diplomacy.”

Dating back as far as 2,000 B.C., saunas got their start as caves sealed with animal skins or pits dug into hills across Northern Europe. In a dark land, they warded off the forbidding conditions outside. Early saunas included wood-burning fireplaces where stones were heated for hours to a high temperature, and occupants splashed water on top to fill the place with steam. People believed they bestowed magical powers. And, practically, they provided cleanliness in an era before sterilization. To this day, many older Finns will tell you they were born in a sauna, the cleanest place available at the time. And saunas aren’t just Finnish, of course; neighbors Russia, Sweden, Estonia, and others also trace a long lineage.

Get inside and it’s all about the loyly. Pronounced “lool,” it describes that feeling of intense heat washing over you, an intense, total, captivating sensation. People usually sit on the top row of the sauna, where you’ll feel the strongest heat. And Finns like to have their loyly together; sauna is very much an activity that’s essentially communal.

That’s the case at old-school Arla, located in what was once a working-class quarter of Helsinki that’s more recently become gentrified with boutiques, gastropubs, and coffee bars. Here, men and women are separated by gender into separate sections, handed a small towel, and shower in a well-worn change room before entering the steamy, cedar-lined chamber. Many other public saunas remain popular, including Loyly (the name is intentional), which attracts a young, fashionable crowd. Located right on the waterfront, it feels a little like a day club in Miami, as attractive 20-somethings emerge from one of the two traditional wood-burning saunas or the single smoke sauna to take a dip in the sea, before settling down for lunch or brunch on a menu of local dishes.

That kind of style and sophistication may not extend to Finland’s far north, but a visit to Rovaniemi, the capital of the region of Lapland, will take you into another world. A short flight spirits you to this boreal wonderland of evergreen forests and cold, clear lakes. All of Finland and most of Europe believes that Santa resides here—children’s letters are routed to this city of about 65,000, and you can visit St. Nick every day of the year at the sprawling, touristy Santa Claus Village, where he will greet you for a photo and take all of your gift requests.

And, obviously, you can sauna, too. At the upscale Arctic Treehouse Hotel, they invite guests and visitors to relax in their jacuzzis, or one of three saunas—traditional, smoke, and infrared. Then stay the night and stare up at the Northern Lights in one of their suites, where beds face floor-to-ceiling windows.

But you’ll probably find your best experience on a reindeer farm. Finland’s Arctic is dotted with them; the region is home to some 200,000 of these beasts, and the animals easily outnumber the people. Farmers here offer their own, personal saunas to visitors through an online booking system. It’s a rare and fascinating opportunity to experience a private, rural, family sauna, and in many cases, the farmer and his family will actually join you in the heat.

That’s what happens on my trip. I meet the family of three, chat about the farm for a little while before descending a hill to find a small cabin situated on a serpentine bend of the Ounasjoki River, its chimney already puffing out happy little clouds of white smoke. Soon, I’m in there, with the farmer and his son. Lathering up with a dark, earthy, restorative peat, later we will share beers.

For now, the conversation is stilted, a language barrier dividing us. But we’re united in that one essential Finnish quality—the loyly. Looking out on the languid flow of the river, sitting covered in peat, and joined by two complete strangers, the heat washes over me, seeming to get right into my bones. No, I’ll never be a Finn. But here, in this sauna, in the northern reaches of the world, I feel right at home.