A Message of Hope in Shen Yun Philadelphia Program 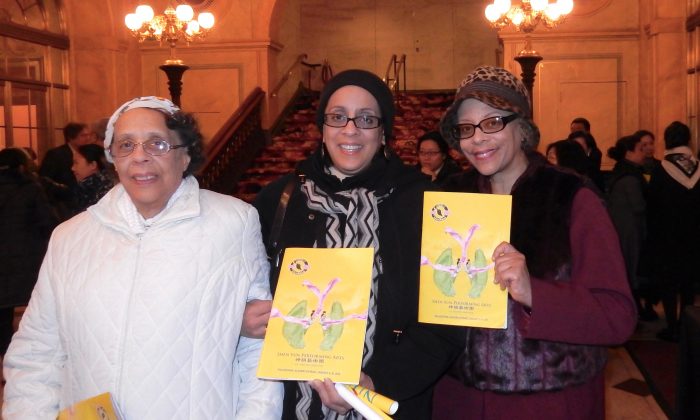 Meva Justice (C) with her sister Nadene (R) and mother (L) on Jan. 8, 2016, at the Academy of Music, Philadelphia, after taking in Shen Yun Performing Arts. (Epoch Times)

PHILADELPHIA—Two delighted daughters attended Shen Yun Performing Arts with their mother for the inaugural performance in this city on Friday evening.

The story impressed me.
— Meva Justice

“The story impressed me. It showed Chinese culture from 5,000 years ago up until now.” She was also impressed by “the fact that all these people were able to get together to make this cultural expression, whereas they’re not allowed to do that back home.”

Shen Yun Performing Arts tours the world, but it is unable to enter mainland China because of the communist regime’s restrictions on the arts and free expression.

“It’s nice to be able to see another culture’s theater,” said Ms. Justice, a regular theatergoer. “It’s a shame it can’t be expressed in the homeland. But I’m glad that they can express it throughout the world.”

One of the basic meanings she felt came through in the performance was the message of hope. “That there’s hope for the future, and that as long as people get together, they can express themselves. In other words, don’t let the government hold you down.”

This was particularly apparent in the final number, Ms. Justice said. Titled “Hope for the Future,” the piece “revisits an ancient belief—the idea that we all came from the heavens and that, by becoming good, we can one day find our way back home,” the program reads.

Ms. Justice came to the show with sister Nadene Moore and their mother. Ms. Justice had seen it advertised, and knew several people who attended last year “and thought it was absolutely beautiful.”

Ms. Moore, a computer science teacher, was particularly taken with Shen Yun’s special effects—that is, it’s interactive digital backdrop, projected behind the dancers, showing natural vistas and heavenly realms. Sometimes dancers disappear into the backdrop as they turn into divine beings, shoot down dragons, or fly to the moon.

“I loved the special effects of the screen, the flying, and then it became dancing, and the colors—beautiful, it’s just gorgeous,” said Ms. Moore. She felt that in addition to entertainment, it would be educational for children.