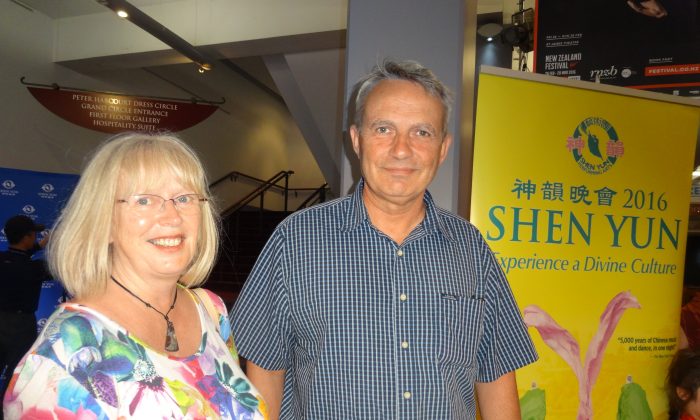 WELLINGTON, New Zealand—Many audience members came from far and wide to attend the performance of Shen Yun Performing Arts at the St. James Theatre on Feb. 17.

Colonel Ole-Asbjørn Fauske and his wife, Christine, travelled from Christchurch to Wellington to see Shen Yun. Col. Fauske is a Norwegian colonel in the Air Force.

Col. Fauske recently retired from his position as Deputy Commander of NATO Headquarters in Sarajevo. He was recently appointed Chief of the Armed Forces department of culture and tradition (FAKT) and Commander of Akershus Fortress in Oslo.

Well acquainted with military precision and order, Col. Fauske recognized the precision in the coordination between the dancers and the full orchestra, which includes ancient Chinese instruments.

The colonel felt his knowledge of Chinese culture expanded as he learned about ancient traditions displayed through the different dances. Shen Yun brings to life a 5,000 year journey through Chinese culture and history.

He noticed that the biggest difference between his culture and Chinese culture is that Shen Yun and its traditional values can not be staged in present day China: “One piece where they showed how people were persecuted—that was quite touching and emotional.”

Referring to the dance ‘Trial by Fire’ where people practicing Falun Dafa are persecuted in China. “That is both disturbing and quite surprising, actually,” he said.

The colonel felt that “the message is to cherish the old traditions. … You need to know the past to have a good path into the future.”

Visual Grace of the Dancers

Mr. Neville Ashley, a car salesman, also travelled all the way from Christchurch to see the performance.

The first thing to make an impression on him was the visual grace of the dancers and the vivid colours of the costumes.

“The movements are amazing and also very graceful, and poetic as well in the choreography. One of the things that I like about the way that the Chinese do things is when there’s something done like this, the timing, I mean, it’s just such utter precision. It’s amazing to see, quite incredible. And the costuming also, just mind-blowing,” he said.

Chinese dance is at the heart of what Shen Yun does. Through every breath and intent, classical Chinese dance allows them to express deep emotions in the dance movements and subtle gestures.

What stood out for him was how the dancers portrayed a journey through the spirit of human beings and the will to persevere.

One piece is set in the late 1960s when the Chinese Communist Party launched a massive movement aimed at destroying traditional Chinese beliefs as well as a loss of freedom of expression.

He said he would tell his friends about Shen Yun saying, “I work with a bunch of Chinese people, so I’m going to go back and tell them how amazing it was,” he said.

“I would tell them it was visually spectacular, inspiring, and so utterly, overwhelmingly colourful and beautiful.”