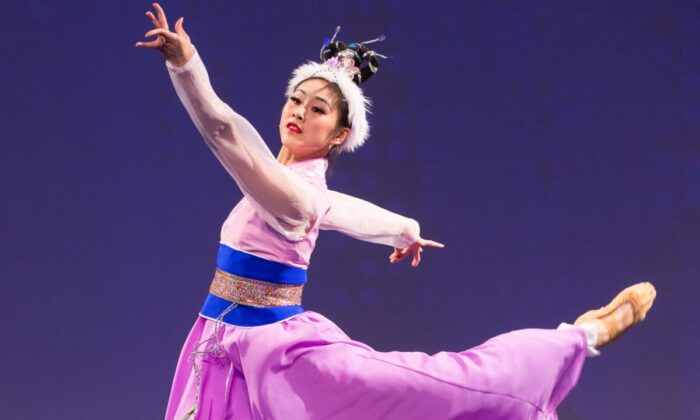 A Shen Yun Dancer’s Journey: From Fear to Compassion

For a long time, she didn’t give this much thought, she said; she’s a go-with-the-flow type of person. But in recent years, she discovered that beneath the casual veneer lay various fears. And in order to rise to the next level artistically, she needed to face them.

“You have to try your best,” Xiao said. “The better way to approach things is, during the process, you try your best, and then whatever the result, you look at it lightly.”

“Oftentimes, it’s pretty easy to do the opposite—you think of the results, but you don’t consider the process as much,” Xiao said.

Xiao has performed many years with Shen Yun Performing Arts, the premier classical Chinese dance company that’s taken the world by storm in the past decade. Dancing came easily and naturally for her, so she didn’t give it much thought.

“Actually, when I was much younger, I loved piano. But one day, the piano in our house was gone, and my parents asked, ‘Do you want to dance?’ So I started taking Chinese dance,” Xiao said. She took to it almost effortlessly, so pursuing dance professionally became an easy decision as well. Not many can say that about this rarefied field.

Classical Chinese dance is an art form with roots 5,000 years deep, with a complete set of movements and its own cultural aesthetic and methodology. It’s on par with ballet in terms of being a comprehensive system of dance.

Xiao grew up with stories about ancient Chinese history and myth, and being a part of Shen Yun meant that she was immersed in them. She loves the endlessly beautiful scenes she brings to life through dance. Stately courtyards, grand imperial palaces—they call to her like a second home. But it took a step of courage to be able to express this world through her art.

Xiao recalls her early moments as a dancer with a brief moment of embarrassment that is soon swept away by honest humility. She remembers being embarrassed when she learned that she would have to act. Alone on stage, she was portraying the Bodhisattva Guanyin, known as the goddess of mercy. The instructor critiqued her for not exuding that ethereal compassion associated with the deity, while she thought to herself, what did a dancer like her know about heavenly mercy?

“I just thought that I was so awkward,” Xiao said. “Over time, I realized acting is easy. … You’re always thinking of how to be the character more.”

It was the first of her fears that she would face. In a way, being self-absorbed stemmed from fear too, Xiao said. It’s easy when you’re self-centered to feel like you can’t do something, or let your worries about what others will think of you get in the way. Realizing this, she also had to face the fact that because most moves came easily, she would just brush aside the ones that didn’t. She had to face self-defeating thoughts head-on, accept herself, and then push through to make fundamental changes.

“That was the reason for not being able to improve some things,” she said. She’s since found that “you learn more when you think of yourself as a blank piece of paper.”

Being in a community of peers who are also pursuing excellence in their craft, with supportive instructors and staff, changed the way Xiao thought about everything.

“When you’re really absorbed into what you’re thinking of all the time, you don’t really realize what other people have done for you, all the help and support we give to each other,” she said.

When she felt awkward and embarrassed the first time she had to act, it was because she felt like she was alone. “But even if you’re doing something by yourself, there’s always people supporting you, behind you. You won’t exactly be alone. And—it’s not about you.”

Recognizing the community around her, Xiao began to empathize not only with those around her but also with the characters in her craft.

It’s been a fulfilling part of her growth. For Xiao, empathy and imagination are key to bringing the otherworldly, mythical, ancient figures to life.

“You have to put into consideration what character you’re portraying and what each move actually means,” she said. The same stock gesture when performed by a Taoist sage will not even look to be the same move when it is performed by a lady. “Being able to understand what you’re trying to say and what you want to portray is really important. Your imagination is important. You have to think of how it should feel.”

But the most important thing for her as an artist is “to dance from your heart,” she said.

By this, Xiao means that she puts her whole heart into everything because to be able to present something uplifting and beautiful onstage, one needs to embody that somehow. There’s an element of purity to it, she said, and she tries to keep that in her heart.

“Classical Chinese dance is about bringing to life the inner world of the characters,” Xiao said. It’s the most unique aspect of the art, and the one that takes the longest to grasp. Nothing can be faked.

“Dancing is something in which you can’t hide,” she said. “Each person, your personality shows onstage no matter how you try to hide it.”

“I feel like there’s a lot to learn. There’s always something to discover,” Xiao said.