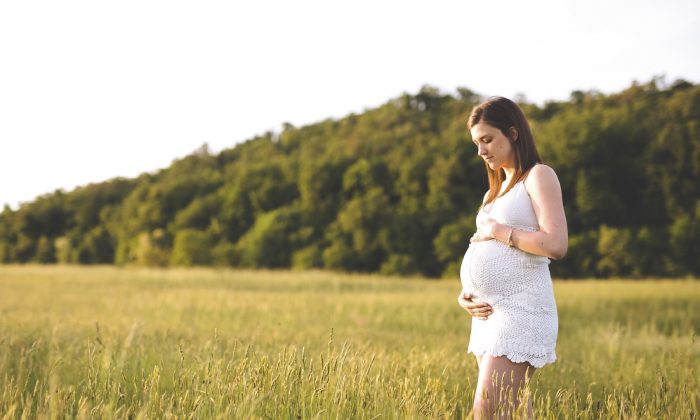 A pregnant woman in a field. Preeclampsia is a potentially fatal pregnancy complication that strikes thousands of women each year, but doctors are still unsure what causes it. (tamaravidmar/iStock)
Good to Know

Preeclampsia is a complication that can develop in pregnancy with potentially fatal consequences. It only occurs in about five percent of pregnancies worldwide, but it is the leading cause of infant mortality in the United States and around the world.

Modern medicine is stumped by what causes preeclampsia and the condition is notoriously tricky to diagnose. Symptoms start out innocently enough—high blood pressure, water retention, and headaches—and can often be mistaken for other chronic health problems. The condition causes blood vessels to constrict which means less blood flow to the liver, kidneys, and brain and compromised organ functioning. If preeclampsia turns to eclampsia, the result could be seizures, coma, and death. Each year, the condition is responsible for about 18 percent of maternal deaths in the United States.

Diagnosing preeclampsia is a delicate affair, because not only is the disease severe, but so can be the treatment. If the condition is mild, the doctor may only prescribe blood pressure medication. But if the presentation is strong doctors may induce labor in order to prevent the mother from having life-threatening seizures that often develop once eclampsia takes hold. However, a premature delivery brings another set of problems, and may even be fatal for the baby.

To diagnose preeclampsia doctors typically watch for a series of elevated blood pressure tests, and check for high levels of protein in the urine, but these signatures can often be elusive. According to a statement from the American Family Physician, “There is no single reliable, cost-effective screening test for preeclampsia, and there are no well-established measures for primary prevention.”

That may soon change. This month researchers announced a successful clinical trial of an easy, inexpensive, and non-invasive screening test for preeclampsia. It’s not only fast (it takes about three minutes), but has shown to be more accurate than methods currently in practice. The research team of physicians from Ohio State University Wexner Medical Center and Nationwide Children’s Hospital who developed the new screening method call it the Congo red dot (CRD) diagnostic test.

The idea behind CRD came from Dr. Irina A. Buhimschi, director of the Center for Perinatal Research at Nationwide Children’s. One sign of preeclampsia is elevated proteins in the urine, and Buhimschi noted that these proteins take on a strange shape.

Buhimschi and her team looked into other diseases characterized by these abnormally folded proteins, and found that Alzheimer’s also demonstrates a similar signature. Alzheimer’s is caused by amyloid plaque in the brain, but because looking into the brain is difficult when the patient is still alive, doctors usually diagnose the condition through symptoms alone. However, upon autopsy, pathologists may examine brain tissue to confirm the diagnosis. One method involves application of Congo red dye to stain the brain tissue which can reveal the presence of amyloids. The dye is a laboratory aid developed by the Bayer pharmaceutical company in the late 1800s. Despite the name, it has nothing to do with the African Congo.

Buhimschi and her team took urine from pregnant women with and without preeclampsia, added the Congo red dye, and tested the samples on a special paper to identify the abnormally folded proteins present in the condition. In the clinical trial, the CRD test demonstrated 86 percent accuracy, compared to conventional diagnostic methods which scored between 60 percent and 83 percent. The research team is currently working with federal regulators to bring a commercially viable product to market.

According to Dr. Kara Rood, a fellow in maternal-fetal medicine at Ohio State and a member of the research team evaluating the CRD test—a faster, more accurate diagnostic tool is important because preeclampsia forces doctors to make some tough decisions.

“It’s difficult because we have two patients,” Rood said. “We have a mom who we obviously don’t want to go into seizure—70,000 women a year die from preeclampsia itself. But on the other side, 500,000 infants die from preeclampsia associated problems, mostly due to the fact that we need to deliver them earlier to prevent the mom from dying.”

Eclampsia is nothing new. Hippocrates observed the condition 2,400 years ago, noting heaviness, headache, and convulsions during pregnancy. He saw the condition as an imbalance of humors, but doctors today are unsure of a cause.

“What causes it? We don’t know,” Rood said. “It’s a mysterious disease. But we know that it can be progressive, and it can be catastrophic to the mother as well as to the baby.”

Research has suggested that genetics, hormonal imbalance, or an immune system malfunction may contribute to preeclampsia. Some believe there is a combination of causes. One researcher particularly dedicated to the condition, retired obstetrician Dr. Tom Brewer, is convinced that preeclampsia is a result of poor nutrition—specifically a lack of protein, minerals, and vitamins.

Studies from the 1920s and 1930s also suggest that preeclampsia is characterized by nutritional deficiency. But the idea is largely dismissed by most doctors today. In the 1980s, Brewer worked with patient populations who demonstrated preeclampsia rates of more than 40 percent. One thing he noticed is that many of his patients ate poorly—lots of processed food and little protein. After he introduced these mothers-to-be to a diet that focused on vegetables, complex carbohydrates, and adequate protein, he claimed to totally eliminate preeclampsia. Details about the diet and the controversy surrounding it are available at his website: DrBrewerPregnancyDiet.com

6 Superfoods for Your Pregnancy
She Gave Birth on an Airplane Without Knowing She Was Pregnant, ‘Cryptic Pregnancy’ Is Real

Whatever the cause, preeclampsia can prove fatal if ignored. And because treatment often involves a premature delivery, the earlier in a pregnancy that preeclampsia occurs, the more dangerous the situation. Researchers are working to better identify the toughest cases.

“We’ve identified over 400 abnormally folded proteins in the urine of women with preeclampsia and right now we’re looking to see if there’s a single one that causes the disease to get worse,” Rood said. “Some get it really early in pregnancy and it’s really bad. Some get it a little later in pregnancy and it’s not that bad, and some people get it right before they’re supposed to deliver. We’re trying to find which one of these proteins is responsible for that really bad form of preeclampsia.”