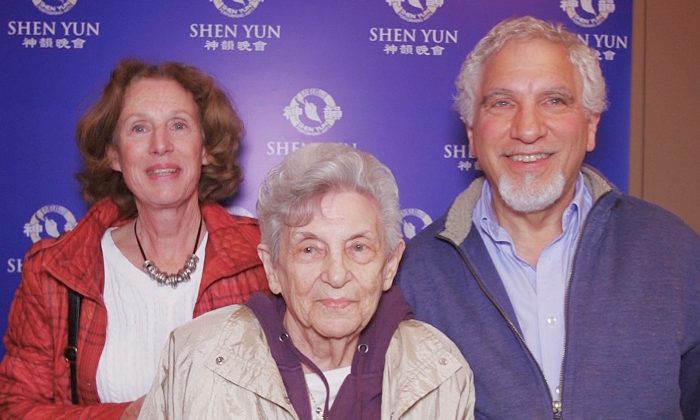 At age 90, Anita Kolber with her children at Shen Yun Performing Arts as a Mother's Day gift. At the New Jersey Performing Arts Center, on May 1, 2016. (Courtesy of NTD Television)

NEWARK, N.J.—At age 90, Anita Kolber wanted to bring her children to see Shen Yun Performing Arts as a Mother’s Day gift. In it, she thought there were valuable life lessons.

“I thought that it was the most wonderful piece of theory I have ever seen. And if more people would look at it and see it, they would know what this life is all about,” Ms. Kolber said after the performance. She said she didn’t have the words to express what this music and dance performance of 5,000 years conveyed, but she would express her amazement over and over again.

“It was just perfect,” Ms. Kolber said. “Not only the dancing and everything, but what it’s trying to say about God and all. We’d have a better world if we all believed in something good.”

The good the ancient Chinese believed in was a higher power, the practice self cultivation, and principles like justice, wisdom and propriety, and benevolence. The beliefs of 5,000 years of Chinese civilization stemmed from the core value of harmony between heaven, earth, and humankind. After all, the culture was said to be divinely inspired.

Ms. Kolber attended the last of three New York-based Shen Yun performances at the NJPAC on May 1, with Ms. Mollie Mallett and Mr. Dave Weiner, both retired teachers. The two agreed the experience was an enlightening one.

For Ms. Mallett, the culture and its traditional arts—like the classical Chinese dance Shen Yun uses to tell stories and snippets of history—were things she had no awareness prior to the performance, she said.

“I loved it, I loved it,” she said. “It was wonderful to see it all. The grace and the beauty of those dancers, and the music was fantastic. It was just a wonderful experience.”

Also new to her was the fact that little has changed in the nature of the communist regime ruling China. At the beginning, the upheaval of society and destruction of lives and traditional structures was well known fact. The Cultural Revolution was the regime’s systematic way of uprooting the traditional culture that had endured for thousands of years.

Over time, we in the West have heard less about it, and many assume this is no longer the case.

But today in China, these restrictions still stand. Shen Yun, for instance, is not allowed to perform in China. But as it tours the world to present the traditional Chinese culture, it is also able to shed light on the persecution of people’s faiths in China today, and there are several story-based dances about this topic.

“It was very wonderful, very moving experience,” she said. “It was very enlightening to hear that the current problems are what they’ve been for a very long time.”

Mr. Weiner found the form of the performance itself enlightening. He had come expecting to be mostly amazed by the dance—classical Chinese dance is Shen Yun’s hallmark—but found himself just as impressed with the music. The orchestra is unlike any other, as it blends traditional Chinese instruments into an otherwise classical Western orchestra. The compositions are original, and all-new every year.

“I really enjoyed the orchestration, the arrangements, listening to the music and the instruments was wonderful. It took me by surprise, it was certainly equal to the dancing,” he said.

The experience was something he wanted to pass on as well.

“I’d take my daughter to see it,” he said. “My daughter is a dancer. The colors, the beauty, certainly to come for that. It’s wonderful.”