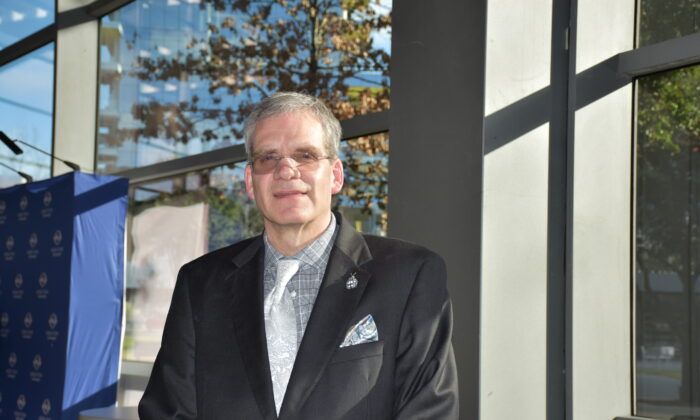 DALLAS—Have you ever loved being somewhere so much that you’ve gone back seven times in one month? One theatergoer in Dallas has returned again and again to Shen Yun Performing Arts—seven times, in fact, since it first arrived in Texas in December: William Eck, owner of fundraising firm True North.

Eck’s enthusiasm is not unique. The latest performances of New York-based Shen Yun in Dallas have been sold out, which has led Dallas organizers to add an additional performance on Sunday to accommodate the demand.

Eck said the reason he kept returning to Shen Yun and why he brought a different person with him each time is that he felt inspired.

“And the chance to have somebody experience the opportunity of grace, beauty, discipline, and extension of self, and express yourself, that’s important to me. So it’s been—most of the people, seven times, there had been six different people, I want to bless them to experience a great opportunity,” Eck said at the Winspear Opera House after the Jan. 26, 2020 matinee performance.

Shen Yun’s artists carry a mission as they tour the world: to revive China’s 5,000 years of civilization through art forms such as classical Chinese dance, bel canto singing, couture costumes, and an orchestra with Eastern and Western instruments.

Ancient Chinese culture was deeply spiritual and encouraged self-reflection and self-refinement. Practices such as Buddhism, Daoism, and Confucianism permeated everyday life. People acknowledged the presence of divine beings as well as a Creator.

“So to me, [Shen Yun] has helped me find my soul,” Eck said. “It inspires me to do more, be more, and as the Greeks said, find thyself and through the performance, it helps you connect to your soul and go ‘I can do something different and make a difference for somebody today.'”

Eck’s love of the arts motivated him to experience Shen Yun in the first place.

“First of all, I love performing arts, so the live arts express oneself. It helps you find your soul, to be, realize, that life is not about self … it’s about serving others. Just a way to be able to express life and fulfillment, each pursues their own goal.

“And so the beauty of the color, the music, the discipline. I mean, I liked [the Shen Yun performance] the best watching all the ladies all smiling, even all the way in the back because they feel like they want to give their best to make me feel fulfilled, not just go through the motions, they want to be real. So that makes me feel good.

“It also reminds me how spoiled I am to be in this country because you can express your faith in what you want.”

Eck went on to express how important he feels it is to be respectful of differences and boundaries in a country where personal freedoms exist, and that he wishes other places throughout the world such as China can one day experience such freedoms.

Shen Yun’s roughly 20 vignettes include stories about present-day China where basic rights such as the freedom of belief are suppressed by the Chinese Communist Party and persecution against faithful people continues.

Falun Dafa is one such faith that is especially brutalized by the communist party. It consists of teachings such as truthfulness, compassion, and tolerance as well as meditative exercises. Its adherents report better health and improved mental well-being. Shen Yun’s artists practice Falun Dafa and say it leads them toward profound artistic breakthroughs, too.

Eck saw depictions of Falun Dafa practitioners on stage in Shen Yun and it piqued his interest. “I haven’t bought the books yet but I plan to read the books to understand because I like to learn, I like to go beyond my comfort zone, I don’t have a problem reading something else. I am a Christian but for me to learn about Buddhism will help me grow in my own faith. I think that’s important.”

Eck elaborated on this spiritual aspect of Shen Yun, seeing connections to it from throughout life and the world.

“It’s also tied into Maslow’s Hierarchy of Needs when ultimately self-actualization goes beyond self. So it’s a difference between happiness and joy, happiness being ‘I’m pleased,’ but joy is of served, making a difference for others. Nobody can ever take that away. There’s a saying from Waite Phillips, an oil guy, said, ‘The things we keep permanent in this life are the things we give away because nobody can ever take that away from me,'” Eck said.

“A little I know about Buddhism, it seems to follow along with my Christian thinking as well: beyond self, serve others, be faithful, don’t be so selfish, from the little I know. Because in terms of the Christian faith, Jesus was selfless, so it’s ‘love one another as Jesus did,’ that’s what Buddhism is about. It’s not about self, it’s about others, that’s the sense that I have,” Eck continued.