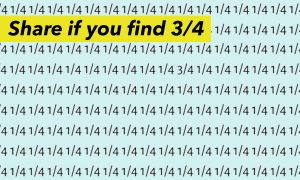 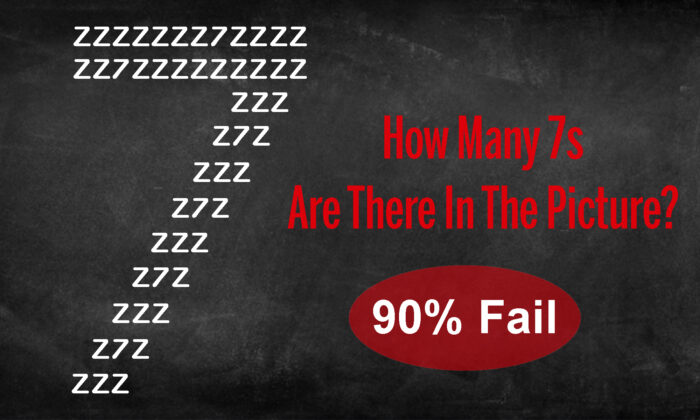 60-second Challenge: How Many 7s Can You Count in This Picture Puzzle in 1 Minute?

For those of us who work desk jobs or stare at screens all day, it is imperative to exercise both the eyes and neural pathways to avoid sensory stagnation. Puzzles, brainteasers, and optical illusions provide the perfect opportunity to take a moment out of your working day for the sake of your senses.

Puzzles that combine letters and numbers are particularly useful as our brains naturally group alphanumeric data together; having to extract numbers from a sea of letters within an optical puzzle, therefore, is brain-training heaven.

Take this picture puzzle. Ostensibly, viewers will notice a collection of characters arranged in the pattern shown below, but it is arranged in such a way that makes it a strain to see subtle differences, and thus presents the following challenge: Count all the number 7s you see, and to make it slightly more challenging, you have only 60 seconds to do so.

So, time yourself, and as soon as you’re ready … begin!

Once your 60 seconds are up, you must stop, and whatever count you’ve reached, that is your tally. Then, scroll down to compare your efforts against the real answer—it might surprise you!

As for how many 7s are hidden within this picture, the correct answer is: 7. Did you get it right?

Allegedly, this puzzle only has a 10 percent success rate among netizens, so anyone who achieves the correct answer has license to feel proud being among that 10 percent. Those who do not succeed, however, may find comfort remaining in solidarity with the 90 percent that were also thwarted by this perplexing puzzle.

Here they all are circled in red in the diagram below:

Many netizens believe that the picture only contains six number 7s, and therein lies the tricky element of the puzzle; the seventh 7 is, in fact, the overall pattern of characters itself, the large number 7 comprised of letters and numbers. Do you see it?

When this picture puzzle was posted on 1 Billion Places, comments flooded in from bemused, confused, and triumphant challengers alike, all sharing their thoughts on the viral brainteaser. Meanwhile others have commented on their frustrations and disagreements online as well.

“People have been arguing relentlessly over the amount of 7s,” one person observed. “They either say 6 because they forget one or 8 because they count the one in the question.”

“I got 19,” added another, having taken the challenge to the max by counting the multiple 7s interwoven within the big 7, comprised of individual horizontal and diagonal rows. Kudos!

“Also consider the upside down scenario,” another challenger suggested, expanding the puzzle even further; “in Z there are two sevens, one of them upside down.”

While the “official” answer tends to reign supreme, picture puzzles such as this one are always open to interpretation, hence their viral appeal. What do you think? Is the correct answer 7, 19, or something else entirely?

The psychologists Robert Sternberg and Janet E. Davidson have argued that solving puzzles is a twofold neural process. The thinking brain compares hidden information within a puzzle with information that it already has stored in memory and then employs the imagination to create a novel solution, as per Psychology Today.

This combination of sensory input, memory, and imagination is the recipe for solving puzzles, and our expertise has the potential to grow exponentially; the more puzzles a person undertakes, the better they will become at solving them.

The beauty of picture puzzles such as this one is that they transcend language and can be enjoyed all around the world. So consider sharing this 60-second challenge with friends, family, and colleagues, and compare notes. It’s all in the name of fun and the pursuit of a healthy brain.