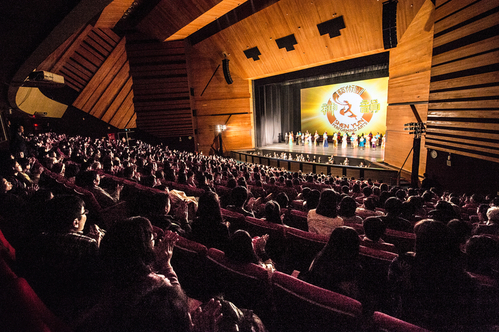 Company President: Shen Yun ‘Is carefully crafted and clings to the heart’

TAICHUNG, Taiwan—Mr. Chen Tung-Min, founder and president of Chuan Ying Biotechnology, and his wife watched Shen Yun Performing Arts, on March 15, at Zhongshan Auditorium. Mr. Chen exclaimed, “This is the first time I saw this form of performance in Taiwan. My heart is surging after the show.”

Mr. Chen was touched and glad to see the essence of traditional Chinese culture depicted by New York-based Shen Yun, “I can see a lot of effort is put into the stories. They cling to my heart and make such a deep impression.”

“Chinese dance is at the heart of what Shen Yun does. Known for its incredible flips and spins, and its gentle elegance, it is one of the most rigorous and expressive art forms in the world,” according to its website.

There were so many aspects of Shen Yun that Mr. Chen loved. “The dancing and the music rhythm combine in a flawless way. The animation on the background projection is unforgettable, absolutely thrilling,” he said.

Mrs. Chen believed that Shen Yun conveys a positive message, “I think the stories are showing us Truthfulness-Compassion-Forbearance, I want to watch the stories again. Next year I will definitely bring my friends along.”

Mr. Zhang (pseudonym), chairman of a leading international group running business on the both sides of the Taiwan Straits has become a fan of Shen Yun Performing Arts after he was recommended by his friends to see Shen Yun show.

He attended Shen Yun performances for the third time along with his wife on March 16, when the New York-based Shen Yun Performing Arts International Company presented its 2014 final show in Taichung.

After seeing the performance, he highly praised Shen Yun’s perfect coordination of the animated digital backdrops, music, costumes, colors and other artistic elements.

“Amazing! The entire program is indeed extremely amazing. The overall choreography (of Shen Yun) is very professional, and its contents are something relating to the reviving of the 5,000 years of Chinese culture. Its synchronization of high-tech, performers and music is indeed amazing. It’s really great,” Mr. Zhang exclaimed.

He added, “Not only does the program demonstrate historic legends, but it also promotes Chinese culture such as virtues of loyalty, filial piety, justice and righteousness, etc. It is really very good to do so.”

“If they get more involved with (this kind of culture) and see this kind of performance, there may be more amazingly effect.”

Enjoying Shen Yun at the Zhongshan Auditorium, on the evening of March 13, were Ms. Huang Danyi and her husband. As the president of a Japanese company, head of Zhushan Township Sweet Potato Book Association, and a candidate for election as head of Zhushan township, Ms. Huang said, “In the hope of giving everyone a spiritual feast and harmonizing our society, we would take action to support it and attend Shen Yun yearly.”

Watching Shen Yun for the second time, Ms Huang said, “Every time I feel something different. Whether music, dance or stories, culture, I like them.” The live orchestral performance by Western and Eastern instruments particularly amazed Ms. Huang. “I particularly love that feeling.”

“After watching the show, I feel peaceful, finding it easier to pause for thought and to calm myself down.” Having a tight schedule, Ms Huang felt joy and relaxation during the show.

As for the messages conveyed by the show, Ms Huang said, “I think each of the programs is about one truth. ‘Truthfulness, compassion, and endurance’ are mentioned. I like the three words.”