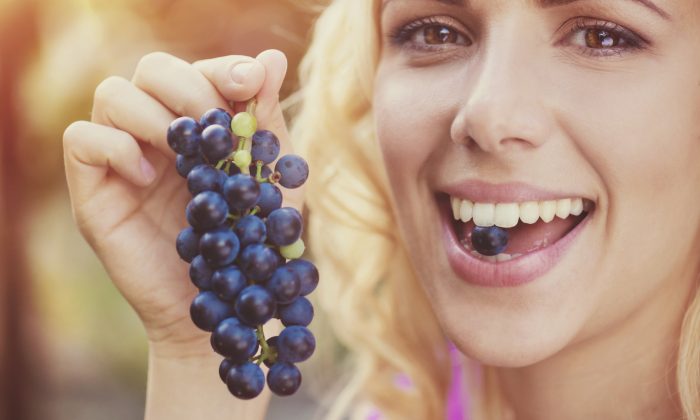 There’s a reason why your mouth may water for sweet potatoes in October and November but barely cross your mind in July. People have been eating seasonally since the beginning of time; there was no other choice.

Today many of us have the luxury of purchasing out-of-season produce year-round at the grocery store, but there’s probably still a part of you that is drawn to what’s in-season. Not only will such foods be tastier, fresher, and available to buy locally straight from a farm or farmer’s market, but they may contain more nutrients, too.

For instance, one study found in-season broccoli (fall) contained nearly twice as much vitamin C as out-of-season (spring) broccoli. Perhaps the ancient medical traditions like Ayurveda, which have long recommended seasonal eating, somehow knew that produce picked at its peak of ripeness in accordance with the laws of nature was healthiest too.

Ayurveda also suggests seasonal eating helps with digestion, because it favors easier-to-digest foods in the winter when your body is hard at work burning energy to keep you warm (and therefore theoretically has less energy to devote to digestion).

Now, with fall upon us in the US, it’s a perfect time to feature foods that taste best during the fall months, and October in particular. Check out the list below for starters.

Apples are in season from August to November, but many unique varieties not made for storage come into their prime in October (and will only be available for a month or two). Try Fuji apples or Gravenstein apples for two varieties that reach their peak in October.

Compared to other commonly consumed fruits in the US, apples rank second for highest antioxidant activity. However, they ranked highest for the proportion of free phenolic compounds, which means they are not bound to other compounds in the fruit, and therefore may be more easily absorbed into your bloodstream.

Notably, much of apples’ antioxidant power is contained in the peel, where you’ll find antioxidants like catechins, procyanidins, chlorogenic acid, ploridizin, and more. Eating apples has been linked to a lower risk of chronic diseases including type 2 diabetes, cancer, heart disease, and dementia.

It’s best to eat apples in their whole form, as this will give you the synergistic blend of nutrients and fiber the way nature intended, yielding greater health benefits than apple juice.

Pears are in season from August to February, but like apples, a few varieties stand out in October: try Bartlett pears or French butter pears, if you can find them.

Pears are rich in vitamin C and copper, and are one of the highest-fiber fruits (one medium pear contains about 5.5 grams of fiber). Fiber plays an essential role in your digestive, heart, and skin health, and may improve blood sugar control, weight management, and more.

People who ate a diet high in white-fleshed fruits like pears or apples also had a 52 percent lower risk of stroke, according to an American Heart Association study, likely due to their fiber and phytochemical contents.

Grapes are popular during the summer, but grapes harvested during October tend to be sweeter, since the cool nighttime temperatures bring out their sugar. Grapes contain vitamin K, manganese, and beneficial antioxidants, including resveratrol, which is found in red grape skins.

Resveratrol’s antioxidant, anti-inflammatory, and anti-carcinogenic properties have been well-established by science, and its benefits are thought to extend to the prevention and treatment of chronic diseases such as cancer and Alzheimer’s disease, among others.

Grapes should be consumed in moderation, however, as they’re high in fructose, and excessive fructose intake is linked to insulin resistance, type 2 diabetes, and obesity in those who eat a highly processed food diet.

It’s interesting to note, however, that the consumption of whole grapes has been linked to a reduced risk of type 2 diabetes. It’s unclear why the authors observed this benefit, but it’s likely that the phytonutrients in the grapes compensate for any potential fructose toxicity.

Persimmons are fairly uncommon in the US, though they’re the national fruit of Japan. These red-brown or orange fruits are rich in vitamins A and C, along with manganese, fiber, B-complex vitamins, copper, and phosphorus. They’re also a good source of phytonutrients, flavonoids and antioxidants, including lycopene, lutein, and beta-carotene.

Hachiya persimmons should be eaten fully ripe (you can cut it open and eat it with a spoon or slice it up in a salad). Fuyu persimmons are also in-season in October; these can be eaten hard, like an apple.

Pumpkins are most plentiful and easy to find in the US in October, mostly for decorations or carving into Jack-o-lanterns. But don’t discount pumpkins’ value as a food. Pumpkin is a type of winter squash that is an excellent source of carotenoids, including beta-carotene (which converts into vitamin A in your body).

Pumpkin is also rich in fiber, with three grams in a one-cup serving, and you can consume the seeds, too, for additional benefits (like immune system and prostate support).

Other notable nutrients in pumpkin include vitamin C, potassium, riboflavin, copper, and manganese, along with vitamin E, B vitamins, folate, iron, and phosphorus.

Taken together, pumpkin provides a powerful blend of nutrients that work together to synergistically benefit your health. As reported in Nutrition Research Reviews:

“Pumpkin is one of the well-known edible plants and has substantial medicinal properties due to the presence of unique natural edible substances. It contains several phyto-constituents belonging to the categories of alkaloids, flavonoids, and palmitic, oleic, and linoleic acids.

Various important medicinal properties including anti-diabetic, antioxidant, anti-carcinogenic, anti-inflammatory, and others have been well documented.”

When using fresh pumpkin in your cooking, simply wash the pumpkin’s exterior, scoop out the seeds and pulp, and roast it, whole, in a 350-degree F oven for one to two hours, until tender.

You can also cut it in half and place it, cut side down, on a baking sheet in a 350-degree F oven for one to two hours. Then, simply scrape out the tender flesh and discard the rind. Pumpkin is in season from October to February.