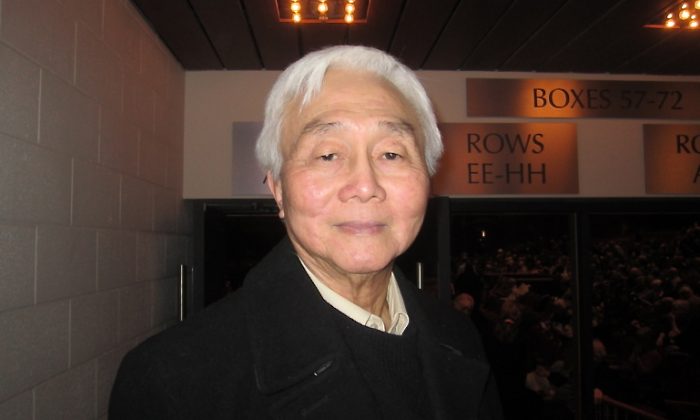 KITCHENER-WATERLOO, Canada—On the evening of Jan 14, Shen Yun International Company performed its first show at Centre in the Square Theater in Kitchener-Waterloo, the twin cities of Canada.

He Wenchuan, a Vietnamese-Chinese mold manufacturer, and his wife came to watch Shen Yun for the first time. They expressed their love and enjoyment of the evening’s program, praising the show as enchanting.

He Wenchuan’s father was from Guangdong Province, China, and he, himself, was born and raised in Vietnam. He said, “To be able to see a performance like this in Canada is a wonderful surprise, and it also evokes a feeling of intimacy.

He Wenchuan said he loved every program of the evening, “the entire show was flawless.” The traditional culture presented by the show—whether it was the clothing, dancing, or music—struck him the most.

He Wenchuan said that classical Chinese dance is very beautiful. Although he had seen Chinese dance previously, it was his first time watching a live theatrical performance, which was very immersive and felt especially satisfying.

He Wenchuan felt very intimate with the Chinese historical stories and the ancient myths and legends of the show. He said that after living in Canada for a long time, he had forgotten quite a bit of history. After seeing Shen Yun, the knowledge and history he had learned many years ago in school came flooding back.

Jack, a Chinese student studying in Waterloo, saw Shen Yun for the third time already. This year, she proudly came with her Western friends to see the show. In an interview with reporters, she said that her favorite program was the “Tai Chi Fan Dance.” The dance performers’ gestures and movements were full of the essence of Tai Chi.

Dr. Seimer Tsang, Senior Professor of Mechanical Engineering at Lake Hyde University, was full of praise after seeing the Shen Yun International Company’s performance at Center of the Square Theater in Kitchener-Waterloo, Canada.

In an interview, Professor Tsang said he had long heard of Shen Yun’s amazing reputation and today, he finally got his wish. After seeing the Shen Yun performance for the first time, he felt the show was ethereal, just as wondrous as he had expected.

Professor Tsang continued, “The performance was very intoxicating. I have been in Canada for many years; I emigrated here in the 1960s. Shen Yun evoked wonderful memories from the past.”

He also said that the show was so synchronized, showing how well-trained the actors were. He said, “The dance performers were all exceptional. The programs of the male and female actors were all very exciting and coordinated.”

As a Chinese person, seeing the Shen Yun performance made Professor Tsang very proud. He concluded by saying that Shen Yun has an important educational value. Unfortunately, his great-grandchildren were too young, and he could not bring them to see the show.