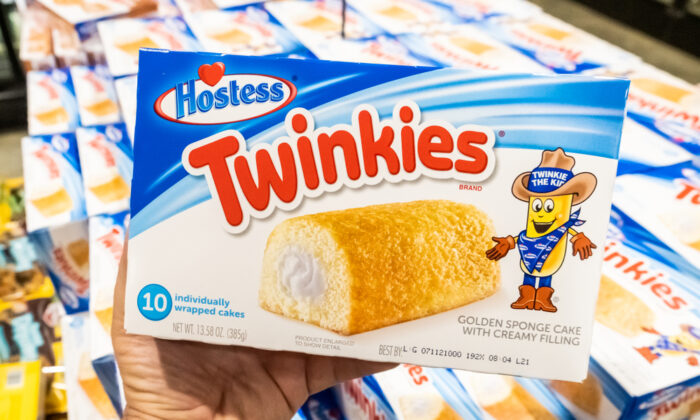 There’s a Hostess Twinkie in Maine that is now more than 43-years-old—possible proof that preservatives work, and that an inquisitive mind can leave a mark on the future for decades to come.

Roger Bennatti taught science at George Stevens Academy (GSA) in Blue Hill, Maine, for over 30 years. He retired in 2004, but still remembers the fateful science class in 1976 when a student asked “the question.”

“We happen to be discussing food additives, types of food additives, food preservatives and one of my students just happened to ask me, ‘Well, how long would a Twinkie last?’ And my response was, ‘I don’t know.'”

So Bennatti sent the student to the nearby Merrill & Hinckley general store to buy one.

“The student came back with the package. I basically [opened] the package, ate one of the Twinkies, and then put the other [one] up on the chalkboard,” beginning the experiment that has lasted more than 43 years.

Attending that science class was junior Libby Austin, who is now the assistant head of school for GSA and goes by her married name Libby Rosemeier.

“I can remember at one point in time someone said, ‘Well, maybe I should eat the Twinkie, because it’s only been there a few days and it’s probably still good.’ And then I remember kind of just forgetting about the Twinkie.” And then, Rosemeier said, the Twinkie “just became a part of the classroom.”

While Hostess describes the Twinkie on its website as “The Snack Cake Golden Child,” the GSA Twinkie has turned from gold to gray, and the texture has become a bit more rough and pitted. But it has generally retained its size and shape.

“I basically say the Twinkie has become much like me—it’s older, it’s grayer, and it’s more flaky,” said Bennatti.

“It’s become more brittle,” he said. “You wouldn’t want to whack it on a table because you’d probably shatter the Twinkie. So it’s become more fragile because it’s desiccated, it’s lost a great deal of its moisture.”

Rosemeier says she has been surprised and a little alarmed at how well the Twinkie has held up over the years.

“It’s still the same shape. I mean, what’s in it, that makes it keep its shape after 45 years? It’s a little frightening.”

The Twinkie was invented in 1930 by James Dewar, a vice president at Continental Bakeries, an Illinois company that made baked goods for Hostess.

In the 85 years since its introduction, the Twinkie has become an icon and an object of American popular culture, appearing in films, TV shows, cartoons, and popular songs. As a product, it has earned a place on supermarket and corner store shelves from coast to coast.

The modern-day Twinkie boasts a list of ingredients more than 35 items long, including multiple preservatives, according to author Steve Ettlinger, whose book “Twinkie, Deconstructed” examined and catalogued the pastry’s ingredients.

A spokesperson for Hostess said the current Twinkie has a shelf life of 65 days.

“We eat that, and it lasts this long,” said 18-year-old GSA student Austin Snow recently, as he examined the middle-aged treat.

Bennatti said the GSA Twinkie is more than just a relic of the school’s past. He said current and future students can still learn from it.

“What this is showing is that sometimes experiments can go on a very long time—in this case, over 40 years,” said Bennatti. “Sometimes there’s no sharp cutoff to where you stop learning about something.”

When Bennatti retired in 2004, he bequeathed care of the Twinkie to Rosemeier.

It currently resides in a glass case in Rosemeier’s office. Her hope, and Bennatti’s, is that a permanent display case for the Twinkie can be set up in the school someplace more visible, where students can see and read about the Twinkie and a science experiment that began decades ago.