Celebrity Says Shen Yun Is a Must See, That Lifts Your Spirit 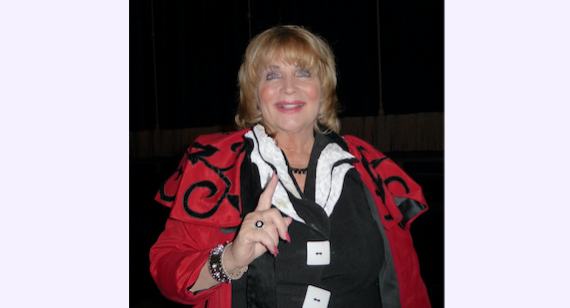 LAS VEGAS—Watching Shen Yun Performing Arts for the first time on Jan. 22, Dr. Susan Stafford felt uplifted. “I would say if you want something that lifts your spirit, this is a must!” she said.

“I give great applause,” she said, giving thanks to her friends for bringing her, “because it’s so spiritual and uplifting,” she said.

The list of her accomplishments is long and ongoing. The hats she has worn and wears cover a lot of territory. She is a humanitarian, spokeswoman, clinical psychologist specializing in crisis work, chaplain, public relations worker, and seminar speaker.

As a performer she enjoys Shen Yun not only with her heart but through the lens of a professional.

“I believe the timing is meticulous. The colors are defined, and I believe it’s very spiritual,” Dr. Stafford said.

It was the spiritual foundation of the performance and the courage of the performers to speak out about the persecution of Falun Dafa that really spoke to Dr. Stafford.

Falun Dafa is a self-cultivation practice based on Buddhist and Taoist principles. It has been persecuted under the communist regime in China since July 1999 and is ongoing.

Shen Yun Performing Arts, a non-profit based in upstate New York, has the mission to not only revive the best of the traditions, legends, and myths of ancient China, it also provides a voice to the outside world for those persecuted in communist China.

“There’s a lot of things in the performance I’d like to mention,” she said, “Firstly, I worked in India with Mother Teresa and those suffering from leprosy; therefore, the meaning of this [performance] shows me bravery.

“Bravery because China is under siege, bravery because mainly the people are being stripped of their humanity, and that’s why I really appreciate my friends bringing me here tonight because this is very spiritual,” Dr. Stafford added.

A world traveler, Dr. Stafford feels that persecution is evident.

“I believe that the persecution that’s mentioned is all too real,” she continued. “We may not hear about it on a daily basis, but it’s happening and I give much credit to all [who] represent China and are trying to do the very best for what’s happening in today’s world. I applaud you.”

As a chaplain, Dr. Stafford embraced ancient China’s deep connection with the divine. First, she noted Buddhism, which she said is connected to peace.

But the performance correlated with her Christian understanding, too. “What we do on earth, what we believe while we’re on earth, makes a different as to whether we’ll go to heaven,” she said.

“I thought that was very strong in what was represented in this performance tonight because we all know that the world is in trouble and we all know that dark is dark and light is light and this was all about light and hope, [and] understanding,” she added.

Dr. Stafford left these words of appreciation for all the performers in the Shen Yun Performing Arts Company: “I just thank you from the bottom of my heart and those of us here who really need you, and more people like you, to do what you’re doing. That’s showing courage and bravery.”

“Xiè Xiè,” she added, which translates from Chinese as “thank you.”