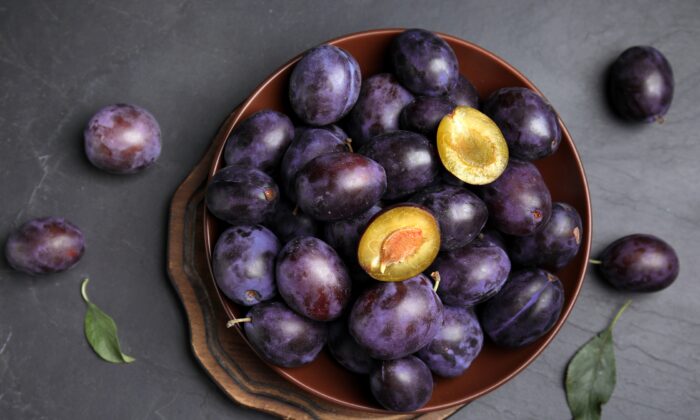 You Should Love Plums

More than just a juicy fruit that’s a seasonal delight in the kitchen, plums have a lot to offer in health benefits and wellness support, offering nutrients that influence everything from constipation to cognition.

They can be eaten fresh or dried, and are easily transformed into sauces, jams, and chutneys. They can also add a nice sweet touch to your meat dishes or turnovers. But plums aren’t just a tasty treat. They also offer a bevy of health-promoting properties that are hard to ignore.

Mounting research on plums shows promising outcomes on their anti-inflammatory, antioxidant, and memory-improving qualities. Researchers are particularly drawn to this fruit for its high phenolic content, primarily antioxidants called anthocyanins.

Here’s a rundown of 11 reasons to love and eat plums with gusto today.

Dried plums, or prunes, are believed to be effective in preventing and reversing bone loss.

To test this, researchers recruited 236 women, one to 10 years postmenopausal, to their study and found that dried plum significantly reduced the blood levels of bone-turnover markers in the subjects. They concluded that dried plum can improve bone mineral density in postmenopausal women partly by suppressing the rate of bone turnover.

Consuming fruits and vegetables potentially protects against age-related cognitive decline, particularly when it comes to high-antioxidant produce. In a study on aged rats, those that drank plum juice from 19 to 21 months of age showed improved working memory in an activity. Those fed dried plum powder didn’t differ from the control group, likely because of the smaller quantity of phenolics in the powder form.

Consuming prunes may effectively aid in treating constipation. People who ate 2 ounces or 50 grams of prunes daily for three weeks reported having better stool consistency as well as frequency, compared to the psyllium group.

Be careful, however, as consuming too many prunes may lead to unwanted effects, such as diarrhea. Also make sure there are no added sugars if you’re consuming prune juice for bowel benefits.

The extract from immature fruit possessed cytotoxic effects, indicating the potential to be a safe, promising dietary intervention against the development of breast cancer.

In one study, participants drank prune juice and consumed three or six prunes every morning for eight weeks, or drank only a glass of water on an empty stomach. The prune and prune juice group experienced significantly lower blood pressure, lower total cholesterol, and lower LDL cholesterol versus the water group.

In another study, men diagnosed with high cholesterol had lower LDL cholesterol levels after they consumed 12 prunes every day for eight weeks. In a separate study, consuming polyphenol-rich peach and plum juice prevented risk factors for obesity-related metabolic disorders as well as cardiovascular disease in animal models.

In a study published in 2009, immature plum extracts strongly inhibited cancer cell growth in HepG2 cells, which are implicated in liver cancer. Immature plum and its active compound, epicatechin, were deemed “a natural resource for developing novel therapeutic agents for cancer prevention and treatment” by the researchers.

Drying, however, may affect the polyphenols present and influence the various ways plum inhibits the growth of foodborne pathogens. Plum extract powders, for instance, showed greater anti-inflammatory activity depending on the treatment and temperature used in the drying process.

In probing the underlying effects of purified plum polyphenols on human lung cancer cells, scientists concluded that there is a potential for the polyphenols to be an effective dietary intervention for cancer or during chemotherapy.

In a study, researchers evaluated the effects of water-extracted plum on adiposity and inflammation in cells, analyzing aspects such as total phenolic and flavonoid content along with antioxidant activity.

Their results emphasized the potential for plums to be a natural agent in preventing and improving obesity. Snacking on dried plums may also increase satiety as well as decrease subsequent food intake, helping control obesity.

In vitro animal cell and some human cell studies have highlighted functional foods’ ability to influence insulin resistance and underlying oxidative stress and inflammatory processes leading to diabetes. In a study, data indicated that a functional foods-based diet, including plums, may help manage Type 2 diabetes. Plums also have the potential to increase levels of the hormone adiponectin, which plays a role in regulating blood sugar.