‘You have to see it to believe it,’ Art Teacher Says About Shen Yun 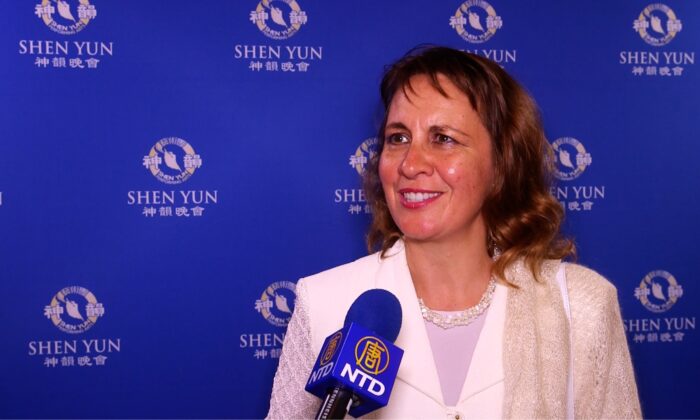 Marina Khudovina, art teacher and owner of Love for Art in San Diego, attended Shen Yun Performing Arts at the California Center for the Arts in Escondido on Jan. 20, 2020. (NTD Television)

ESCONDIDO, Calif.—The love of art is often kindled in our hearts when we’re children, and for many, the opportunity to reconnect with it is a rare and welcome experience. But one classical Chinese dance company—Shen Yun Performing Arts—is touring the world, providing just that chance, and hundreds have reported that seeing it has touched their hearts profoundly.

Marina Khudovina owns a business in San Diego that conducts art education for children. She praised New York-based Shen Yun’s dance, music, and storytelling when she attended the performance at the California Center for Performing Arts in Escondido, California on Jan. 20, 2020.

“The show was amazing. A lot of people asked me to describe it, and even coming here, I said ‘I don’t think I’ll be able to.’ You have to see it to believe it,” Khudovina said, adding that everything from the scenery to the costumes to the classical Chinese dancers was amazing.

Shen Yun’s mission is to revive authentic Chinese culture, including the spirituality that resides at its core. Although China is its cultural place of origin, Shen Yun is based in New York and cannot perform in China today due to the communist party’s systematic campaign of destruction toward traditional culture. A Shen Yun performance’s 20 or so vignettes include stories about the ongoing persecution and the ways in which some Chinese citizens are standing up to it with compassion and courage.

Khudovina herself has personal experience with this, and said about the fact that Shen Yun cannot perform in China, “I totally understand why it is not, because I know, I came from the same regime.”

“I grew up in a regime, which is right now in China, and I grew up during the Soviet Union, so I know exactly how it is, and I know what it was like to fight for what is right and a lot of people on the other side thinks ‘this the right thing to do’ until they truly realize—opening their eyes and see the reality—this is what it’s all about.”

That struggle of the conscience, having to perceive and choose between good and evil, is depicted in Shen Yun’s storytelling dance “Abetting the Wicked.” In it, two brothers are enmeshed in the Chinese Communist Party’s violence against spiritual practitioners of the discipline known as Falun Dafa. While the Party has been persecuting people of faith since the days of the Cultural Revolution, the campaign against Falun Dafa began in 1999 and continues to this day.

Chinese culture has always revered the divine, and Shen Yun’s stories reflect that belief, which is one that Khudovina connected with personally.

“I totally believe it. Yes, because I grew up with exactly the opposite, that we were not created by God, but explained completely different reality to us. And most of the children believe and grew up with that. When, right now, I’m with my friends–who I look up to–start studying with the word of God, and I, of course, I can see the true reality.”

As an art teacher, Khudovina was impressed with the artistry she saw in Shen Yun.

“I was totally amazed,” she said. “All the dancers’ performance, instruments … the singer, just every single person who was part of the performance including all the orchestra, I just stand and applause.”

“You have to, again, you have to come and see [Shen Yun] to believe it.”