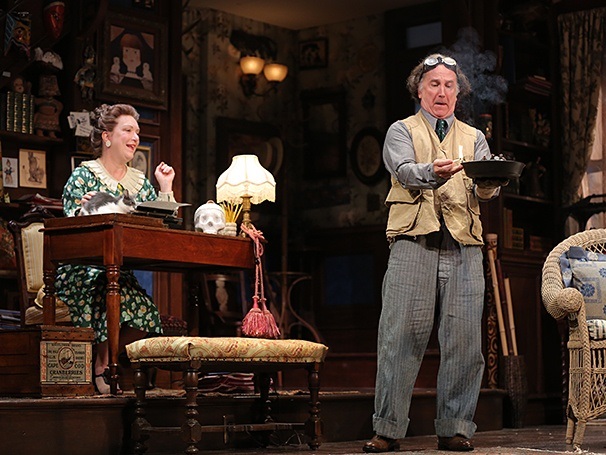 “You Can’t Take it With You” is Revived with Verve

One of the more entertaining plays last season was a dramatization of “Act One,” Moss Hart’s memoir about his early career culminating in his first collaboration with George S. Kaufman. The most successful of their plays together was the 1936 comedy “You Can’t Take it With You,” which won the Pulitzer Prize and was made into an Oscar-winning movie. Now, the work is being revived, directed by Scott Ellis, with a wonderful cast and its wit and charm are undiminished.

The comedy is about an eccentric family, the Sycamores. Each member of the household is a character. The one thing they have in common is that they are good-natured and enjoy life, albeit in unconventional ways. Let’s just say that this is not the world of Eugene O’Neill or Tennessee Williams.

The only normal member of the household is Alice (Rose Byrne making a charming debut on Broadway), a secretary at a Wall Street firm in love with her boss’s son, Tony Kirby (Fran Kranz). His uptight parents are played by Byron Jennings) and Johanna Day and the hilarious meeting of the two families may be considered a predecessor of “La Cage aux Folles.”

The head of the Sycamore family is Grandpa Martin Vanderhof (the commanding James Earl Jones in an unusually genial role), who retired 35 years earlier and doesn’t bother paying income tax. His daughter Penny (Kristine Nielsen) is an unsuccessful playwright and her husband, Paul (Mark Linn-Baker), makes fireworks in the cellar.

Perhaps the funniest is the Sycamores’ daughter Essie (Annaleigh Ashford), a would-be-ballerina, whose facial expressions are priceless. Her husband Ed (Will Brill) plays the xylophone and prints quotations from Trotsky. Essie studies with the Russian exile, Boris Kolenkhov (the flamboyant Reg Rogers).

Visitors to the home include the hard-drinking actress played by Julie Halston and a Russian grand duchess portrayed by Elizabeth Ashley.

Also praiseworthy are the sets by David Rockwell, the costumes by Jane Greenwood and music by Jason Robert Brown.

Scott Ellis’s revival gets it right in all respects.