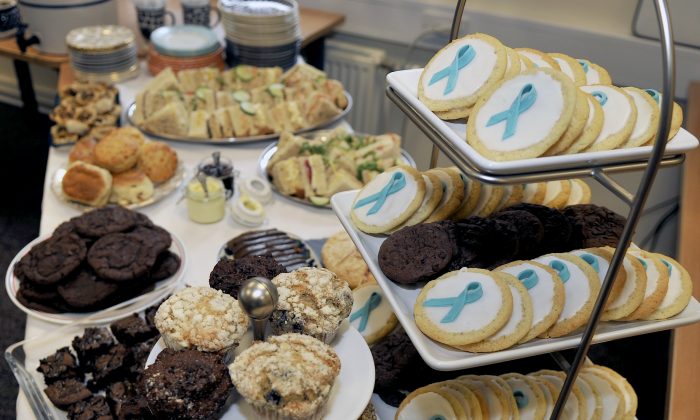 The snack table at your conference is a easy, but likely a bad idea. (Airman st Class Kyla Gifford)
Health

A survey of what working adults ate over the course of a week found that one in four people got food at work one or more times and that it was generally high in empty calories, salt, fat, and sugar.

These treats included pizza, soft drinks, cookies, brownies, cakes, pies, and candy. They added up, on average, to nearly 1,300 calories per week, the study authors report in the Journal of the Academy of Nutrition and Dietetics.

“The majority of this is not from cafeterias or vending machines but offered for free at social events and meetings, which surprised us,” said lead study author Stephen Onufrak, a researcher with the Centers for Disease Control and Prevention’s Obesity Prevention and Control Branch in Atlanta, Georgia.

Onufrak’s findings are drawn from a nationally representative sample of 5,200 employed adults who took a survey from the U.S. Department of Agriculture in 2012 and 2013, which asked what people ate over a seven-day period.

They found that 23 percent of workers obtained food at work during the week, including 17 percent who got food for free and 9 percent who bought food. Among the top calorie contributors in both cases were soft drinks, sandwiches, tortilla and other types of chips, donuts and other pastries, burgers, pizza, burritos, and candy.

As measured by a standard known as the 2010 Healthy Eating Index (HEI 2010), the workplace foods got an average score of 48.6, which is about the average score found in analyses of menu items at fast food restaurants, the study team notes.

While food obtained at work doesn’t represent the largest part of most people’s diets, about 11 percent of workers obtained food at work three times per week, and five percent of workers did so five or more times per week. That means millions of employees eat a large number of calories at work regularly, and it could be a significant part of their diet, the authors point out.

“Some workers may grab a snack, but others may be relying on work as a major component of their diet,” Onufrak told Reuters Health in a phone interview.

The researchers are now looking at characteristics of worksite wellness programs and how they can affect nutrition. For example, future worksite policies could create a “healthy meeting rule” that includes healthy options alongside pizza or cake, Onufrak said.

“It would be interesting to know more about the worksite food environment … and if worksites do offer more healthful choices but most workers are choosing the less healthful foods,” said Simone French, a researcher at the University of Minnesota in Minneapolis who wasn’t involved in the study.

“Figuring out how to improve food choices at the worksite involves understanding the interplay between the foods available in the work environment and the foods that workers themselves prefer to purchase or consume,” she told Reuters Health by email.