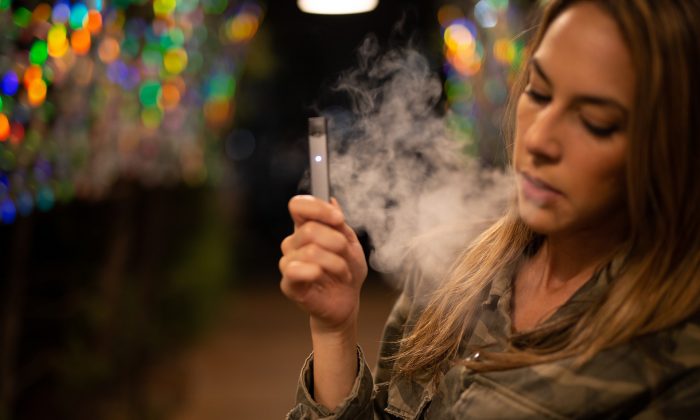 Many pregnant women in the study thought e-cigarettes would be safer, not realizing that nicotine is dangerous for infant development. (Pixabay)
Health

Women Who Vape Around Pregnancy May Wrongly Think It Safe

Health professionals advise against using any nicotine products during pregnancy, but some women using e-cigarettes before, during, or after pregnancy think it’s safer than smoking, U.S. researchers report.

In a survey of more than 3,000 new mothers in Oklahoma and Texas, 7 percent said they had used electronic vapor products, including e-cigarettes, around the time of their pregnancy; 1.4 percent used them during pregnancy.

Nearly half of users said they thought e-cigarettes would help them quit smoking or would be safer than traditional cigarettes, the study team reports in the Morbidity and Mortality Weekly Report from the Centers for Disease Control and Prevention (CDC).

“It’s important for people to know that e-cigarettes are not safe to use during pregnancy and that nicotine is harmful to fetal development and infant outcomes,” said lead study author Martha Kapaya of the CDC’s Division of Reproductive Health in Atlanta, Georgia.

“Among those who used e-cigarettes in this study, a substantial portion used them in an attempt to quit smoking cigarettes, suggesting a possible lack of awareness of, or access to, scientifically proven strategies,” she told Reuters Health by email.

Kapaya and colleagues analyzed state-level pregnancy risk data from 2015, when Oklahoma and Texas asked survey participants about their use of electronic vapor products before, during, and immediately after pregnancy. Among the 3,277 women included in the analysis, 83 percent had never used the devices.

While only about 600 women said they had smoked traditional cigarettes in the two years prior to pregnancy, these made up the majority of women who used e-vapor products around or during pregnancy.

“The research is unequivocal on how nicotine impacts the developing fetus and placental barrier, and some studies show that the concentrations can be even greater for the baby than for the mother,” said Nick Wagner of Boston University, who wasn’t involved in the study.

“Nicotine exposure early in development can cause damage at the cellular level,” he said in a phone interview. “During the third trimester, it’s associated with low birth weight, which has been linked to asthma, social and, emotional problems, and attention deficit disorder.”

“These numbers are sobering since the use is likely higher today,” said Cindy McEvoy of Oregon Health and Science University in Portland, who also wasn’t involved in the study.

Among women in the study who used e-vapor products close to or during pregnancy, 54 percent said “curiosity” was the reason. Forty-five percent believed the products would help them quit or reduce cigarette smoking and the same proportion thought the devices would reduce harm to the mother compared to smoking, while 41 percent looked for the ability to get products without nicotine.

“There needs to be more consistent messaging between healthcare providers and their patients,” said Allison Kurti of the University of Vermont in Burlington, who wasn’t involved in the study but has researched smoking cessation during pregnancy.

“Only about 50 percent of providers report screening patients for any type of non-combustible tobacco use,” she said in an email. “Asking women about their use might signal an interest in quitting smoking and an openness to using other quit methods.”