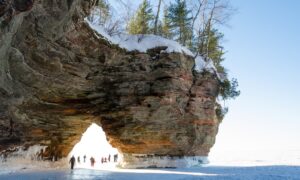 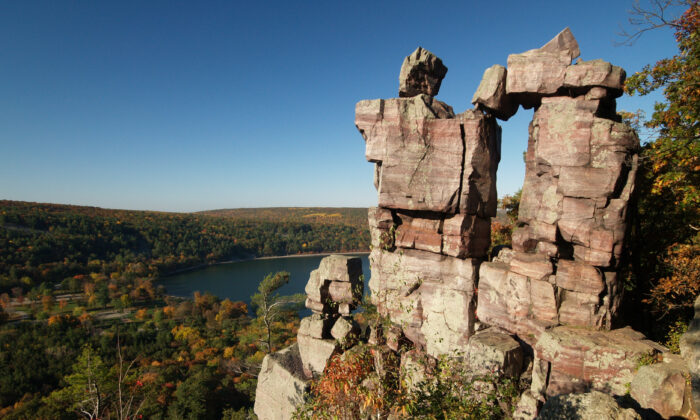 I stood atop a rocky cliff looking down into the waters of the Dalles of the St. Croix, a gorge on the river that forms part of the state border between Minnesota and Wisconsin, inside the latter’s Interstate State Park. Meltwater and sudden outflows from large glacial lakes carved this channel through ancient volcanic rock and created the modern river. But a curious thing: right beneath my feet were round depressions, some of them shafts, descending deep like wells. Potholes. Not the bane of Wisconsin roadways but the mark of raging water. Over 10,000 years ago water flowed through here so fast and hard that it could whirl stones and debris in its eddies which in turn carved deep into the rocky surface as a natural drill. I was already high above the St. Croix, so the river that did this had to be massive.

This is the western terminus of the Ice Age National Scenic Trail. From this point begins a hiking trail that tells a story of such big geological proportions—of mile-thick ice sheets so heavy that even today the earth continues to rebound from their sagging weight; of enormous lakes of meltwater breaking through ice damns; of Great Lakes carved and sand dunes gathered; of the birth of lakes and the redrawing of rivers; and even of ancient volcanoes and southern-hemisphere sea bottoms once again exposed after eons.

The most recent advance of continental ice sheets is named the Wisconsin Glacial Episode for a reason: the ice stopped here, and left behind is terrain that serves as an outdoor classroom for a geology student. The Ice Age Trail (IAT) follows a meandering course that surprises most trekkers.

A kettle moraine is a deposit of glacial till with a depression in the middle of it, formed by the melting ice at the deposit’s center. The glacial ice advanced in lobes, and Wisconsin had six. Two of them, the Green Bay and Michigan lobes, came together along a seam that runs more or less north-south along the eastern side of Wisconsin. The area itself became known as the Kettle Moraine. Early conservation efforts in Wisconsin created the Kettle Moraine State Forest and a trail system within.

But a passionate Milwaukee attorney, Ray Zillmer, pushed for something longer, and in 1958, founded the Ice Age Park & Trail Foundation (now the Ice Age Trail Alliance). The trail didn’t come to fruition in his lifetime, and to be fair, even now it’s not entirely complete. A work in progress, the IAT crosses public and private lands to offer more than 600 miles of volunteer-built trail—typically a rustic footpath or an occasional boardwalk—along what aims to be a 1,200-mile hike, completely within Wisconsin’s borders.

Devil’s Lake is the most visited state park in the Wisconsin system. Its namesake lies between two 500-foot bluffs whose exposed purple-hued quartzite dates back at least 1.6 billion years. At one time the bluffs were a couple islands in warm, shallow seas—situated south of the equator—and millions of years later, before the glaciers came, a river ran between them. The ice flow came to rest against the east bluff, curling around it and stopping up the northern and southern ends of the space between it and the westerly bluff.

When warming climate betrayed them, the melting giants deposited drift to form moraines at either end, trapping a lake in between. Possibly the most strenuous part of the IAT, the Devil’s Lake Segment climbs over both bluffs and a moraine as it heads north out of the park. To the east, the trail winds through forest and meadow almost all the way to the one waterborne trail segment: the free Merrimac car ferry across the Wisconsin River. Across the water the trail continues over scenic bluffs along the river to another surprising overlook at Gibraltar’s Rock.

The State Capitol itself is atop a moraine between two lakes, and Madison is within an hour of a good number of trail highlights, from Devil’s Lake to as far south as Janesville where one can find the Devil’s Staircase, a forest footpath above the Rock River.

As the trail continues east it enters Kettle Moraine State Forest’s Southern Unit, passing along the back of a moraine that looks out over an outwash plain. Kettle Moraine offers a 115-mile scenic drive through the state forest’s Northern and Southern Units, and the IAT, naturally, also follows the length, offering some of the most accessible yet continual stretches of completed trail. Along the way are textbook examples of glacial features: long, snake-like deposits called eskers, half-egg-shaped drumlins, outwash plains, and, of course, more than a few kettles. At this point trail segments are all easy day hikes from Milwaukee.

From Kettle Moraine the trail continues north and takes an easterly turn to the shores of Lake Michigan near Manitowoc. North of here one finds sandy beach and grassy dunes from Two Rivers to Point Beach State Forest before heading inland again. Finally the trail comes back to the big lake at Algoma before crossing the peninsular thumb that is Door County where it ends in another state park, Potawatomi, along the shores of Green Bay, a 120-mile long appendage of Lake Michigan.

Segments can be short as a mile in a state park or longer than 15. And not everything is point-to-point; you can find loop alternatives to an out-and-back. The main trail is marked by yellow blazes on posts, rocks, trees, and signage, but spur trails show blue, and white blazes mark an alternative path that eventually reconnects to the main trail, making a different return path. One such loop near Milwaukee is the Cedar Lakes Segment, which creates a 3.8-mile lollipop amid kames—deltas formed by streams depositing glacial debris that became irregular hills when the ice beneath them eventually melted.

Another roundtrip is Chippewa Lobe Interpretive Loop in the northwest, starting from the David R. Obey Ice Age Interpretive Center, crossing a wildflower-rich prairie and descending to the Yellow River and its tributaries, taking in 1.6 miles of the IAT and circling back for a total of six miles.

Thru-hiking is the ultimate option. Author Melanie Radzicki McManus writes of her own successful completion in “Thousand-Miler: Adventures Hiking the Ice Age Trail,” and Duluth-resident Emily Ford recently completed the whole thing in 69 days during winter. Hikers can back-country camp in designated dispersed camping areas along remote sections of trail, and two 30-mile-plus stretches within Kettle Moraine State Forest offer a couple simple shelters. The Ice Age Trail Alliance has other lengthy recommendations on their site as well. And if tent-camping doesn’t work for you, you can sleep in the comforts of one of many B&Bs along the IAT.

For more information, check out The Ice Age Trail Alliance (IceAgeTrail.org). Highlighted IAT segments can be found in my books “60 Hikes Within 60 Miles of Madison” and “Best Hikes Milwaukee,” but the alliance itself has a superb complete trail guidebook and accompanying atlas.