Winnipeg Patrons Amazed By the Beauty and Energy of Shen Yun 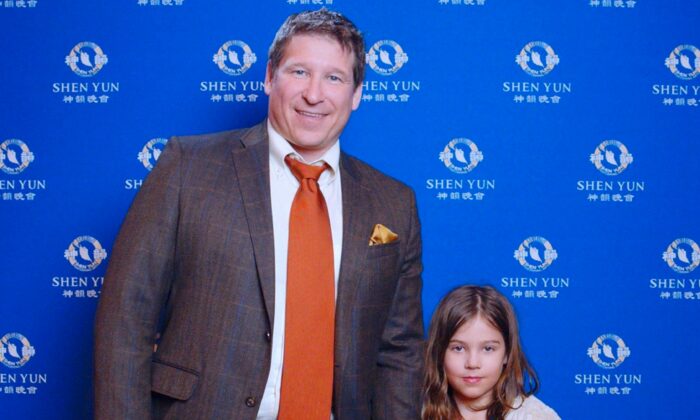 WINNIPEG, Canada—Surgeon David Kinsley and his 7-year-old daughter were delighted by the Shen Yun Performing Arts performance at Centennial Concert Hall in Winnipeg on April 20.

“The performance was amazing. The colors, the choreography, the forms, the dancing, the movements were absolutely beautiful,” Dr. Kinsley said.

“The effortless way in which the dancers took to the air, it was as if they could fly. It was amazing!” he added, commending the dancers for their grace and athleticism executing the challenging flipping and tumbling techniques of classical Chinese dance.

New York-based Shen Yun is the world’s premier classical Chinese dance company. Along with Chinese folk and ethnic dance and a live orchestra with solo vocal and instrumental music performances as well, the production presents story-based dances that depict the history and traditional culture of China from ancient times to the modern day.

The erhu is a traditional Chinese two-stringed instrument that has been called the “Chinese violin.” An incredibly expressive instrument, it is capable of conveying a broad range of emotions, even imitating sounds from chirping birds to neighing horses, Shen Yun’s website explains.

“That was impressive,” Dr. Kinsley said. “The two strings and the way she played them and went up and down the scales. It was amazing!”

Dr. Kinsley’s daughter was wowed by the company’s patented method of integrating a 3D animated backdrop with the stage performance. It allows the performers to remarkably travel back and forth between the stage and the background projection.

“They had that exact … perfect … when they came down from the heavens and then popped up onto the screen—it was flawless,” he said. “My daughter asked me how they did that. I said it was just the magic of theater. … She really enjoyed that part.”

This was the first time Dr. Kinsley and his daughter has seen Shen Yun.

“I brought her here to experience some culture, and this definitely filled the bill,” he said, noting that his daughter has an interest in China.

“She had been learning about it in school … and she loves dance, [so] when I saw this, I said, ‘Well, we’ll have to take her!’”

Along with myths and legends from ancient times, Shen Yun presents story-based dances depicting the persecution of Falun Dafa, also called Falun Gong, a meditation and spiritual discipline based on the principles of truthfulness, compassion, and tolerance.

One dance piece depicts the state-orchestrated crime of forced organ harvesting from Falun Dafa prisoners of conscience in China, part of the CCP’s persecution campaign.

“I just read an article about that in the medical literature … about the illegal harvest of organs in China. So, it really brought home … that that is happening,” said Dr. Kinsley. “What a tragedy,” he added.

Reflecting on Shen Yun’s mission to revive the traditional culture of China, which has been all but lost following decades of communist rule, Dr. Kinsley said he was hopeful that China would soon have a renaissance of art and spirituality.

“Hopefully culture and art will prevail and bring that heritage back to China,” he said, “Hopefully, it’ll be spirituality, art, and a renaissance of those cultural beliefs.”

Regarding Shen Yun’s mission to revive traditional culture, Dr. Kinsley said “it’s wonderful that … someone’s gone to these great lengths to preserve such a rich and beautiful heritage and culture. Hopefully, someday we’ll be able to see this in China, because it’s such a rich heritage.”

“Anything that brings cultures together where they can sit down and experience something beautiful … I think absolutely … opens corridors of communication and breaks down barriers,” he said. “I think it’s the only way and the best way to break down any bias or problems between people.”

Lucky Vandenbroek, an interior designer and owner of Vandenbroek Interiors, was enchanted by the energy and beauty of Shen Yun.

“It’s absolutely fantastic—a lot of energy,” he said, noting that he can feel the vibration and energy.

“You feel it … from their hearts, their souls, their desire to show people.”

China was once known as “The Land of the Divine” and Shen Yun presents this culture by drawing upon the Middle Kingdom’s Buddhist and Daoist philosophies. In the past, artists looked to the divine for inspiration and cultivated virtue in order to create uplifting art. Today, Shen Yun’s artists follow in this noble tradition, which is why audiences feel there is something different about Shen Yun, says the company’s website.

Mr. Vandenbroek said that before buying tickets to see the show, “I would see the advertisements and I just … felt that looks amazing.”

He told many people about Shen Yun before coming tonight to see the show.

“When I was watching it tonight, I thought I’m excited to tell everybody about it!” he said.

“I think it’s important to keep traditions alive,” he said. “It gives me a deeper understanding just coming to the see the show, especially what [the communist party is] doing.”

He noted that “it’s corruption, … it’s oppression,” and “it’s definitely not freedom,” while adding that it’s important to distinguish between the Chinese people and the authorities ruling over them.