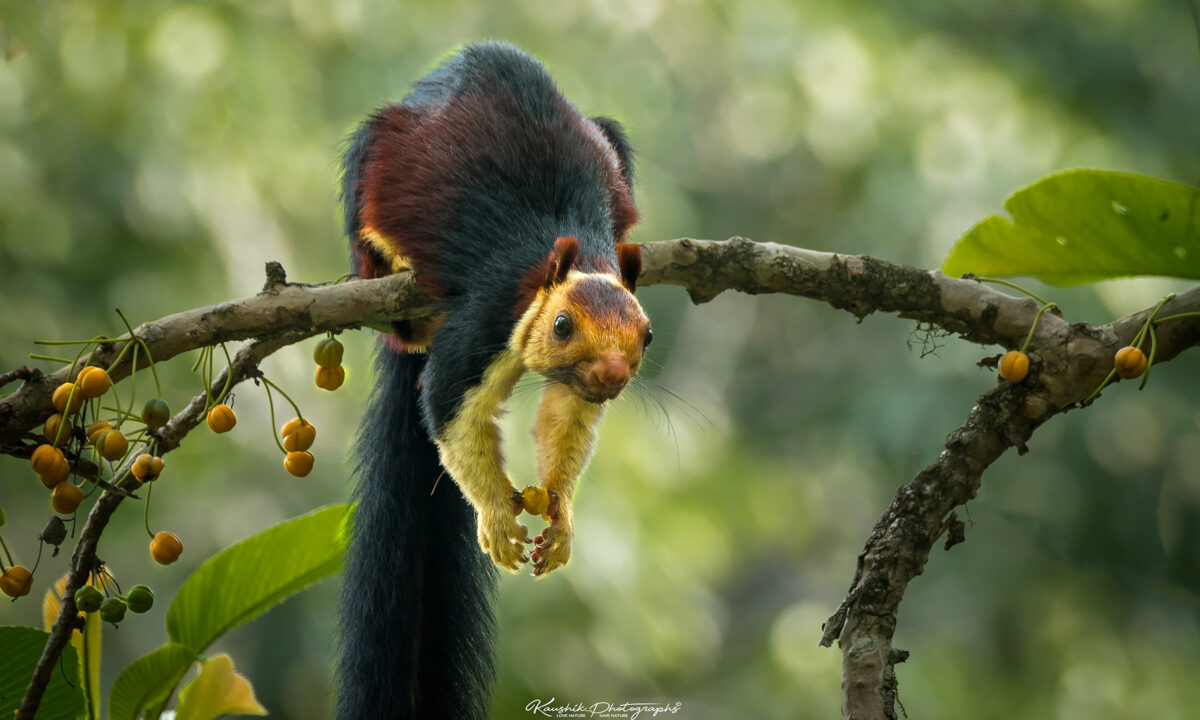 Fascinated by the unbelievably humongous size of the Malabar giant squirrels, an Indian photographer has captured a series of incredible photos and videos of these brightly colored creatures.

Kaushik Vijayan, who’s worked in the finance department of a multinational company in Saudi Arabia for the past 15 years, currently resides in his hometown of Kerala, India. The 42-year-old had an inclination for photography from a young age but didn’t start his journey until he went to the Middle East and got himself a point-and-shoot camera.

Then 5 years ago, he purchased a DSLR camera and began to explore more. He experimented with subjects ranging from portraits to landscapes and eventually realized that photographing wildlife connected with him the most.

Vijayan continued to work on his skill and love for wildlife by challenging himself to improve.

“From casually clicking pictures as a hobby, I turned it into a routine of capturing at least an interesting photograph every day and comparing it with the photograph I took the previous day in hopes of bettering myself each day,” Vijayan told The Epoch Times.

The amateur photographer was so committed to improving his art that he would drive nearly 100 kilometers (62 miles) to capture images of wildlife, despite work days that started at 8 a.m. In his constant search for betterment, he would study his images and tweak his technique.

It was about this time that Vijayan stumbled upon the Malabar giant squirrel near his wife’s residence in the forest of Pathanamthitta in India.

Malabar giant squirrels, which are endemic to India, can grow up to 36 inches in length from head to tail and can leap up to 20 feet as they travel among tree branches. Their stunning multicolor coats, replete with hues of purple, maroon, hints of orange, and deep blue-black, set them apart from their more neutral brown, black, and gray relatives.

When Vijayan first came across these species, he was awestruck by the unbelievable size of the squirrels and said that he was left “speechless” by the animals’ movements: the way they moved through the trees and swiftly swished their long tails, adding, “all the while remaining unimaginably cute,” as they go about their business.

Vijayan started to capture images of these incredible squirrels by taking a few random shots, and then returned to study their behavior, activities, and motions. His greatest difficulty, he shared, was tracking the animals and then locating the best vantage point from which to photograph.

“At times, we can only find them in deep forest areas which are not accessible to us,” Vijayan said. “The speed at which the squirrels traverse between trees also makes it extremely difficult to capture their photographs.”

However, once he managed to take care of that, “the rest of the process followed naturally,” he said.

The images are all taken in raw format and he then uses light enhancement on Lightroom and Photoshop before converting the photos to other formats and sharing them on social media.

The time he’s spent observing the Malabar giant squirrel has not only advanced his skill in photography, but also taught him a few things about the fascinating animal.

Vijayan revealed that the generally “calm” squirrel makes a much louder noise than other squirrels in nature, especially in response to potential danger. He has also come to understand that their primary food source is fruits, along with select baby leaves.

The talented photographer also shared about their fondness for jackfruit and coconut.

“The one thing that spiked my curiosity was how these squirrels break open a whole coconut to drink the water inside,” Vijayan said. “That sight still amazes me.”

Vijayan is not the only one who is amazed; his pictures of the Malabar giant squirrels have left others in amazement too.

“Everyone including me is awestruck looking at this beautiful creation of nature. Something unimaginable yet gorgeous at the same time,” Vijayan said, describing the reactions he’s received to the images he’s shared on social media.

Since taking the images of Malabar giant squirrels, Vijayan has photographed numerous wild animals and promotes his photographs on Instagram and Facebook.

He also manages a wildlife Facebook page boasting over 100,000 followers from around the world. His incredible series of images include a vast array of animals, ranging from Saudi Arabian scorpions to turquoise Indian rollers; from red-whiskered bulbul to doe-eyed nilgai. It is a veritable gallery of the vibrant and the peculiar among wild creatures.

The former amateur is now a dedicated wildlife photographer, something he’d never thought of in his wildest dreams, he said. Over the course of time, his interest and enthrallment with wild subjects have only deepened. What started off as a simple hobby has turned into a work of passion and commitment, enabling others to also appreciate the beauty of nature’s fascinating characters.

“The sense of accomplishment that I find while capturing every single image keeps me going day after day,” Vijayan said.