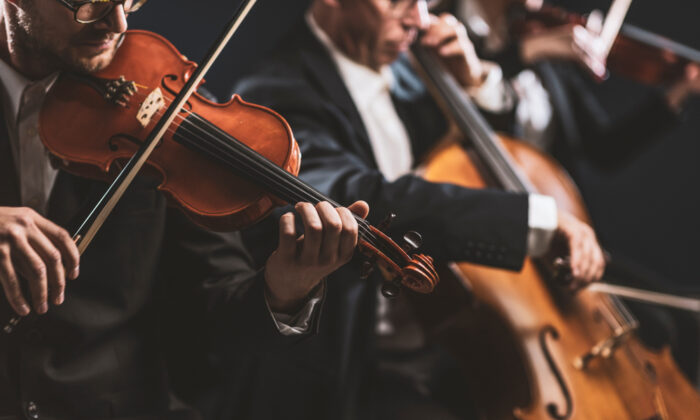 Strings make up the bulk of an orchestra. (Stokkete/Shutterstock)
Performing Arts

Why the Strings Are the ‘Backbone of the Orchestra’

Growing up, I always enjoyed hearing the nicknames given to various musical instruments. We were told that the organ is the “king of instruments,” while the harp is the “queen of instruments.” The bassoon is “the clown of the orchestra,” and, at least in jazz circles, the clarinet is the “licorice stick.” To play the piano is to “tickle the ivories.” The drums are the “skins.” Both the terms “horn” and “axe” can refer generically to a person’s instrument, whatever it may be.

Then we had “Tubby the Tuba,” personified as a chubby boy, and who can forget that the oboe was the duck and the clarinet the cat in Sergei Prokofiev’s “Peter and the Wolf”? And in Camille Saint-Saëns’s “Carnival of the Animals,” the string double bass aptly plays the elephants, the cello the swan, and the xylophone the skeleton bones. In “The Instrument Song,” the horn sounds “so forlorn.” The instruments are truly fascinating, especially to children.

The ‘Backbone of the Orchestra’

But what about the strings? In fact, the strings can take on just about any characterization. We never tire of their warm, human-like tone the way we can tire of, say, the oboe’s nasal and reedy sound. The strings can play almost endlessly, because their players’ lungs or lips do not wear out from constant breathing and blowing. The string group in five sections—violins (split into first and second violins), violas, cellos (properly called the violoncello), and the double basses (also called contrabass)—can collectively cover the entire range of the piano, save the bottom three keys, much wider in range than the other orchestra sections.

They can pass off a melody from high to low, sounding seamlessly like one instrument, while such a figure passed from flute down to oboe to clarinet and bassoon would reveal a distinct change of tone color with each. They can play incredibly soft or loud, fast or slow, hold long tones endlessly with imperceptible changes of the bow up and down, and play all sorts of special effects, like pizzicato (plucking with the finger instead of bowing), whistle-like harmonics (touching a string lightly and bowing), and scratching tremolos (rapidly bowing back and forth on one string).

In fact, in most orchestral works, the individual string players’ parts are typically many pages longer than the other instruments’ parts because they play almost all the time, while the others frequently rest. For all these reasons, the Russian composer Nikolai Rimsky-Korsakov (1844–1908) called the strings the “backbone of the orchestra” in one of the first books to be written on orchestration, his “Principles of Orchestration” (written 1873–1908).

What makes them the backbone is that the strings can stand alone for any length of time, but when woodwinds and brass are featured on the melody, the strings are often still played, too, though in the background. When the wind instruments do play as a section without strings, it is usually not for more than a few seconds, lest the composition begin to sound like a band piece rather than an orchestra piece.

Teaching my university orchestration class, I have always showed the students scores and pointed out how Brahms, for example, employed what is called “homogenous orchestration,” where parts are often “doubled,” that is, played together by strings and a woodwind and a brass instrument blending in unison. Tchaikovsky, on the other hand, is known for “family orchestration,” where a melody will be passed around, with a phrase first played by the strings alone, then echoed purely by the woodwinds alone, and then by the brass alone. Both composers do have all the families play together, too, especially at climactic moments, so it’s only a relative comparison.

I used to wonder as a child how and why our city orchestra could round up so many string players, as many as 70, but so few winds, no more than 23, especially when my school only had a band program with no string players. Where did all those hundreds of marching band members on the field disappear to after graduation, and where did all these string players come from? Apparently, there must have been lots of kids taking violin lessons somewhere, awaiting their turn to be in the majority. The reason for the numerical disparity is simply the disparity in the volume between the instruments. If you had 70 winds on stage with those 70 strings, you might have a hard time even hearing the latter.

I also wondered if, perhaps, all those marching band kids found it quicker and easier to learn a wind instrument than learn to play at the same skill level on a string instrument. So I interviewed Luciano Marsalli about it; he’s a remarkable young college senior I know majoring in violin performance at Vanderbilt University:

Michael Kurek: Are string instruments harder than other instruments to learn to play?
Luciano Marsalli: Yes! To give just one example, instruments with any sort of keys allow their players to immediately gain the satisfaction of playing in tune at a very early stage. We have no marked indications for where to place our fingers—no keys and no frets. We must spend years training our left hand to know exactly where to place our fingers on the strings to produce the correct pitches, which requires precision at the level of millimeters. We are forced to engage in a physical process that is both unnatural and asymmetrical with both hands.

Mr. Kurek: Why did you choose to play the violin, as opposed to the more immediate rewards of other instruments?
Mr. Marsalli:  Without parental support, I never would have made it past my early years on the instrument. I would have neglected my violin studies without the insistence of my parents, something which I now consider a great gift. In growing older, I came to love the violin myself, for many of the same reasons that make it so difficult. In mastering the violin, there is an all-encompassing mastery of music that one encounters: The instrument attains such a versatility that it becomes an extension of oneself, capable of any expression. This is all the more evidenced by a rich repertoire of pieces written for the instrument.

Mr. Kurek: If you could only choose one role as your primary activity, would you rather be a soloist, player in a string quartet, or a member of an orchestral string section, and why?
Mr. Marsalli:

I would almost certainly choose to be in a string quartet. The thrill of being “the one” in any solo setting is certainly alluring, and by contrast, the wonderful unity of playing in an orchestra is a truly fulfilling musical experience. But, for me personally, playing in a small ensemble is the perfect balance between the two. A quartet seems to be the greatest number of players who can all be communicating with each other at once. You can attain a perfectly homogeneous result while still achieving a great deal of intellectual individualism.

The String Orchestra Showcasing It All

Let’s listen to a piece you might hear at any orchestra concert, “Serenade for Strings,” Op. 48 by Pyotr Ilyich Tchaikovsky (1840–1893). Typically, it would be scheduled first in the program, and then the other members of the orchestra would join the strings for the rest of the concert.

It would seem that almost everyone has heard his ballet “The Nutcracker,” but many may be unfamiliar with Tchaikovsky’s romantic, deeply affecting serenade for the string family alone. If you did enjoy that ballet, you are guaranteed to gain a new favorite in this lush, emotional serenade.

If you begin to wonder how Tchaikovsky got such a rich sound out of the strings in the opening part of the piece, it is because four of the five sections (listed above) are playing “divisi,” Italian for divided. That means, for example, that eight (half) of the sixteen first violins are playing one note and the other eight playing a different note. So instead of five-part harmony, you are hearing nine-part harmony. It might help to imagine two barbershop quartets singing together where each person has a different note, so the harmony sounds thicker and richer. From there, Tchaikovsky puts the strings through all their paces, showcasing a delightful, tuneful catalog of about everything they can do.

In four movements totaling around 30 minutes, we are treated to quicksilver-fast music, exquisitely slow and poignant music, and an elegant waltz. He composed the “Serenade” in 1880, and George Balanchine (1904–1983) choreographed it as a ballet in 1934. The waltz from the serenade even became a song in the 1945 movie “Anchors Aweigh,” called “From the Heart of a Lonely Poet,” performed by Kathryn Grayson. In 1983, NBC used excerpts from the serenade as a lead-in to commercial breaks in its broadcast of an NFL Playoff game between the San Diego Chargers and Pittsburgh Steelers.