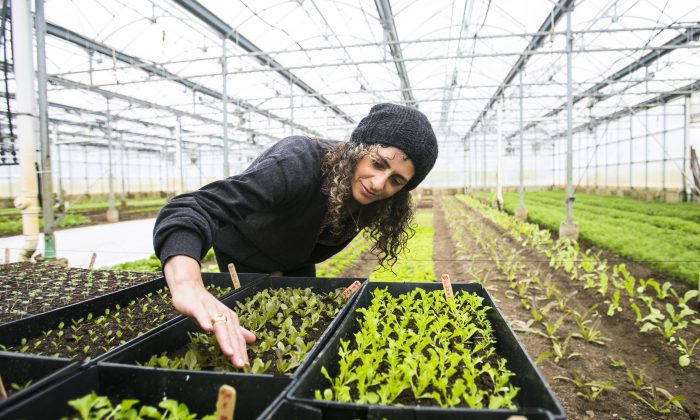 Emerging science has now recognized that the universal theme of man being created from clay may not be that far from the truth.

At least the food we eat, which supplies our bodies with the energy for all that we think, feel, and do, is grown in clay.

Starting from a tiny seed, a carrot obtains from the soil its vitamins A, C, and B6, its iron, and magnesium, as well as the vitamins and minerals that exist in minute traces, yet are essential for life.

If the carrot is deficient, then we are deficient because our vitality is acquired from the soil.

It is a simple logic, but it can also be scientifically verified. Technological advances have opened new windows into the diverse microbial ecosystems that support plant growth, which include the connections between the life of the soil and our bodies.

And it turns out, the microbial connections are crucial, and the more diversity of microbes, the better the soil is for us. The conventional wisdom that sees bacteria as a danger to be avoided—dangers like food-borne Listeria or E.coli, and the war on germs—is being re-examined by pioneers in the medical field.

In medicine, we do not hold all the answers. We’ve gotten a lot of things wrong.
— Daphne Miller, M.D.

“There is a sea change happening,” according to Daphne Miller, a medical doctor who has studied farm ecology from the perspective of what it can teach us about human health. “In medicine, we do not hold all the answers. We’ve gotten a lot of things wrong,” she said recently in New York.

Of course, there are plenty of dangerous bacteria. But perhaps we’ve gone a little overboard, or we are fighting the consequences instead of the causes.

Miller visited and studied seven farms in the course of working on her latest book, “Farmacology: What Innovative Family Farming Can Teach Us About Health and Healing.”

From each farm, she garnered practical lessons for healing and preventative medicine. As the connections between how the farmer treated his soil, plants, and animals became clearer, Miller began to see the farmers as fellow healers.

Miller spoke about her book at Stone Barns Center for Food & Agriculture on April 7, in Pocantico Hills, in Westchester County, New York. One of her first points was to display a slide showing two patches of earth, side by side.

Intuitively, it was obvious that the one on the right that has more green, and more channels for water and oxygen to penetrate the soil, would be the healthier ecosystem. Miller confirmed that the sample on the right was from an organic farm and said studies have found that organic farms have a higher concentration of “distinct microbial DNA.”

Learning how to help the microbes to thrive—both in the soil, and in our own bodies—may hold the key to improving human health.

The absence of microbial species means that “critical biological pathways that ensure overall system health are broken,” the website states.

Why is this important?

Learning how to help the microbes to thrive—both in the soil, and in our own bodies—may hold the key to improving human health.

Miller’s work suggests that a healthy microbial system can help ward off disease by way of a healthier immune system, reduce stress and allergies, confer happiness, and provide insight into new ways of treating cancer.

The Whole Is Greater Than the Parts

Haakenson described how he had followed the prescriptions yearly, adding tons of minerals and nutrients to his farm in an effort to get better soil, but the soil was not improving. He wondered why.

Writing in “Farmacology,” Miller said Haakenson’s story made her think of one of her patients, who was chronically sick and fatigued.

On her first visit, this patient produced a hundred test results from numerous doctors and two shopping bags full of antibiotic prescriptions and supplements. She told Miller the medicine was not working.

As Miller continues to reveal Haakenson’s story, we learn he ultimately decided to give up on the soil tests altogether. He transitioned to biodynamic, a farming method that rejects chemical fertilizers, pesticides, and herbicides in favor of enriching the soil with animal manure from animals raised on the farm.

The improvement in his soil was like night and day. “Lo and beyond, magically everything got better,” Miller said when she told the story at Stone Barns.

Applying lessons from the farm, Miller then “prescribed” her patient a diverse diet of farm-fresh food—and to benefit from the microbes in the soil, Miller suggested that she not worry about eating a bit of dirt along with her vegetables.

The patient was also advised to minimize the amount of preservatives, high-dose supplements, steroids, and antibiotics she consumed, as studies have shown they can destroy the beneficial bacteria that live in our bodies, thus limiting the body’s natural resilience to stress and disease.

In nature, plants produce sugar through photosynthesis from the sun, which is food for the countless bacteria and fungi that use the sugar to access carbon and nutrients from the soil and the air, for the plants.

This simple principle is at the heart of the Bionutrient Food Association (BFA), which is laser-focused on improving the quality of the food farmers produce, restoring the rich flavors that come from the nutrients within.

In the past few decades, much of farming has been focused on how best to achieve high yields, short life-cycles, uniformity, and disease and pest resistance. The important attributes of taste and nutrition have fallen by the wayside.

Douglass DeCandia runs the Westchester County chapter of the BFA. He also farms for the Food Bank for Westchester on three acres spread throughout five area locations.

By studying the lifecycle of the plants, DeCandia has learned to harness the positive attributes of weeds.

When DeCandia began farming six years ago, he said he used to do many things that were destructive to the life of the soil, such as deep tilling, a technique he learned when studying agriculture in college. There was also what he called the unnecessary work, such as pulling weeds and hauling them to another location.

Today, instead of fracturing the soil structure with a machine, he uses a deep-tined broad fork (a hand tool) to penetrate the garden beds and open up channels of aeration, spaced in a strategic manner to preserve the soil ecology.

As for weeds, by studying the lifecycle of the plants, he has learned to harness their positive attributes.

A weed is simply a plant that is growing where you do not want it. DeCandia sows cover crops of grasses and legumes whenever he can, so that every square inch of soil is covered.

But he knows to cut the plants down at their milk stage, after they are finished growing, and their energy is invested in forming seed. The plants’ roots and greenery will decompose in the earth, creating the bounty of organic matter that supports the life of the soil, and there is no risk of the seeds germinating when he is growing food crops.

DeCandia said in an interview he sees his work as helping to restore the integrity of the earth, and that it will translate to the health of the people.

In his view, “people are missing the time and space to understand things and have empathy for others,” and poor food only feeds what he refers to as a “manic state.”

By making good food a part of our lives, we can begin to regain the connections, he said.

“It is our connection to nature that is such medicine for us because we come from the land, and we are completely dependent on it.”