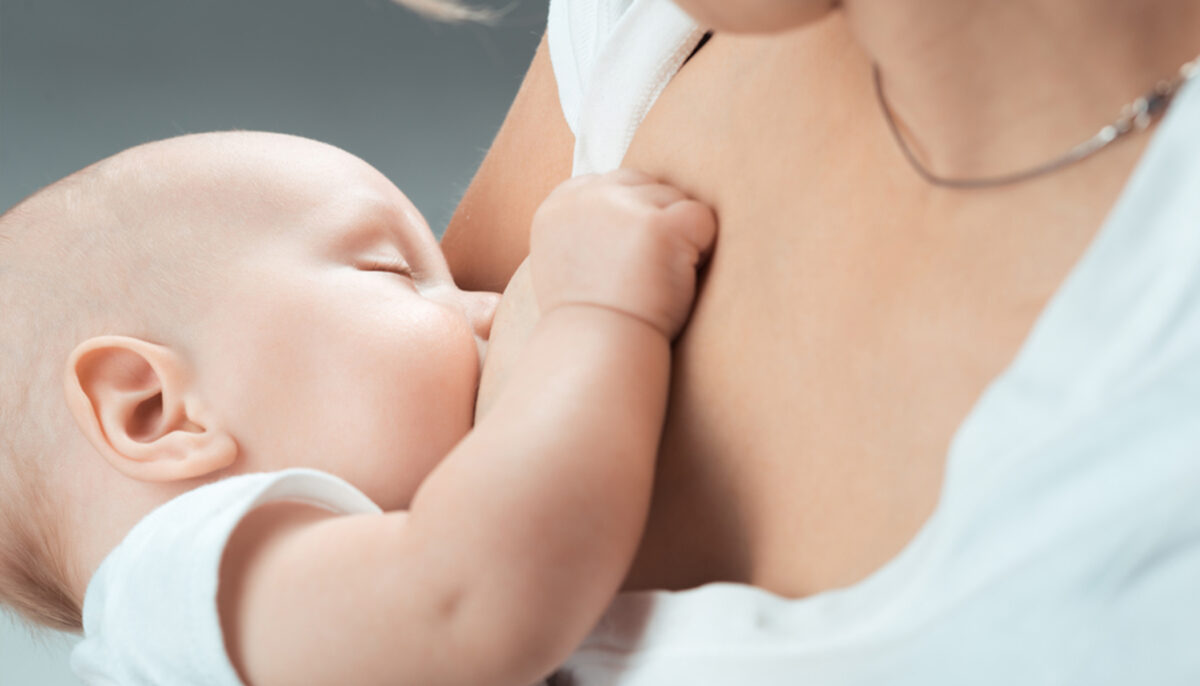 Why Aren’t More Babies Being Nursed?

Breastfeeding offers profound benefits beyond those measured in health outcomes, so why are rates so low in the US?
BY Jennifer Margulis TIMEMarch 23, 2022 PRINT

The day after Leslie Ott’s daughter, Ella, was born at Banner Thunderbird Medical Center in Glendale, Arizona, a doctor came into her room and threatened to separate Ott from her baby. “The pediatrician told me I was starving my baby and would have to give her a bottle, or she was going to be admitted for jaundice and I would be sent home,” Ott remembered. “The baby was cooing and crying, and the pediatrician walks over to the baby and says, ‘Oh, you must be hungry. You look like you’re starving!‘”

Literally thousands of peer-reviewed scientific articles show the short- and long-term health benefits of breastfeeding. In fact, if all babies were breastfed according to WHO guidelines, more than 800,000 infant deaths could be avoided each year.

Given how essential breastfeeding a baby is, why do physicians actively undermine women like Ott who want to nurse their babies? Why aren’t more women, in both America and around the world, able to meet their breastfeeding goals?

The Centers for Disease Control and Prevention (CDC) recommend that women exclusively nurse their babies for the first six months. The World Health Organization (WHO) and UNICEF recommend that breastfeeding begin within an hour of birth, that babies be exclusively nursed for six months, and that the breastfeeding relationship should continue for up to two years—or even longer. According to the World Health Organization, “Breastfeeding is an unequaled way of providing ideal food for the healthy growth and development of infants … infants should be exclusively breastfed for the first six months to achieve optimal growth, development and health.”

However, statistics from the Centers for Disease Control and Prevention show that only about 84 percent of new mothers in America initiate breastfeeding in the first place. Of those, only about 47 percent of moms are still exclusively nursing when their babies are 3 months old. By 6 months, only 26 percent of American women are exclusively nursing. To make matters worse, though exclusive breastfeeding is the best choice, a full 19 percent of breastfed infants are supplemented with formula before they are 2 days old. Yet, early supplementation of formula has been shown to decrease the odds of successful breastfeeding.

While global breastfeeding rates are not as high as they should be, babies born in some countries fare much better than others. Data from the World Bank show that in Norway, a country that has one of the highest child survival rates in the world, nearly 100 percent of mothers initiate breastfeeding. Even more encouraging, after six months, 80 percent of Norwegian women are continuing to breastfeed.

Both the breast milk and the act of breastfeeding—cuddling a baby close to your body, skin to skin—offer myriad benefits for both moms and babies. Human milk is the perfect food for human babies. It’s easily digestible, it tastes delicious, and it has just the right combination of healthy fats and proteins, as well as oligosaccharides that adhere to a newborn’s intestinal lining to allow good bacteria to flourish. Breast milk also contains essential immune-enhancing and disease-preventing properties.

In addition, breastfeeding releases oxytocin, a feel-good hormone that promotes increasing feelings of trust, peace, well-being, and bonding. Once the breastfeeding relationship is established, nursing allows moms and babies to feel connected and relaxed.

According to the Cleveland Clinic, early breastfeeding also helps the uterus contract back to its normal size, and reduces the risk of postpartum hemorrhaging. In addition, women who breastfeed their babies reduce their likelihood of getting breast cancer, urinary tract infections, and anemia. Breastfeeding moms are also less likely to suffer from severe postpartum depression than their formula-feeding counterparts.

But the benefits of breastfeeding for the baby are even more impressive. Breastfed babies are less likely to suffer from digestive problems, flatulence, ear infections, bad breath, and respiratory tract infections. In fact, exclusively breastfeeding may sometimes be a matter of life and death. Breastfeeding is protective against SIDS (Sudden Infant Death Syndrome) and necrotizing enterocolitis, an acute gastrointestinal condition, where the wall of the intestines is invaded by bad bacteria, causing inflammation, bowel destruction, and even death.

And the health benefits of breastfeeding continue for the baby long after infancy. A relatively large 2021 study, conducted by a team of scientists from Switzerland, the UK, and the United States, found that children, who were exclusively or partially breastfed, had fewer neurodevelopmental disorders at age 4, and higher IQs at age 8, than children who were formula-fed. A breastfed child is also less likely to become obese or to get childhood leukemia.

Breastfeeding is also protective against asthma, allergies, eczema, and Crohn’s disease later in life, to name just a few. Breastfed children also have lower harmful cholesterol levels as adults, suggesting to scientists that breastfeeding may have long-term benefits for cardiovascular health as well. As if that’s not enough, one study, that followed more than 7,000 infant-mother pairs in Australia for 15 years, found that the breastfed babies were less likely to be neglected or abused by their mothers.

The artificial milk industry is dominated by a small number of extremely powerful, multinational, multi-billion-dollar corporations. These profit-driven companies employ the best global marketing firms. According to a team of Scottish researchers, the two largest infant formula manufacturers—Nestlé and Danone—spent well over a billion dollars on advertising in 2018-19 alone.

“The advent of social media has made it easier to pose as the friend and supporter of parents,” the Scottish scientists explained. “It is also providing companies with a rich stream of personal data with which they hone and target their campaigns.” Infant formula advertising includes establishing relationships with expectant and new mothers, offering “free” samples to hospitals and doctors’ offices, and using social media (particularly Facebook) to influence moms.

In 1981, WHO and UNICEF, in an attempt to limit infant deaths, tried to prevent inappropriate direct-to-consumer infant formula advertising, by adopting an International Code of Marketing of Breastmilk Substitutes. The Code, as it is often called, was aimed at governments, companies, and healthcare workers—not at parents. Partly due to pressure from the artificial milk industry, however, the United States was one of three countries (along with only Chad and Bangladesh) to vote against this voluntary international code.

Signing on to a voluntary code of conduct to protect breastfeeding moms, and adhering to it, are two different things. A 2021 study, published in March in the International Journal of Environmental Research and Public Health, found that several infant formula companies have capitalized on the fears surrounding COVID-19 to sell more formula, and discourage breastfeeding, in direct violation of the WHO Code.

Industry tactics, this past year, have included making unfounded health claims about the benefits of artificial milk for infants, and promoting misleading information about breastfeeding, in order to cultivate parental fear and uncertainty. They have also used aggressive donation campaigns to make themselves appear as supporters in the fight against COVID-19, the study found. The goodwill these companies gain by participating in the fight against COVID-19 translates into a “valuable marketing asset,” one that has served, ultimately, to “undermine maternal and child health during the COVID-19 pandemic,” wrote the researchers.

Although breast milk is a living wholesome nutrient-dense natural substance, and artificial milk is a desiccated product that includes ingredients like corn syrup solids, palm oil, carrageenan, maltodextrin, and lactose, as well as genetically modified organisms, and even glyphosate, part of the industry’s advertising strategy is to promote infant formula as “equivalent to” breast milk. This strategy has been sadly effective.

Even though most women believe that breastfeeding is best for babies, they do not seem to understand the benefits of breastfeeding as compared to formula feeding. In one WIC survey, 64 percent of mothers did not know that breast milk would protect their babies from diarrhea. Another study found that nearly 75 percent of moms believed that feeding babies with infant formula instead of breast milk would not increase the chances of babies getting sick.

In a 2011 report about the barriers to breastfeeding in the United States, the surgeon general cited the lack of support for breastfeeding education on the part of hospitals and doctors, conflicting advice given by medical professionals when a woman runs into breastfeeding difficulties, and a lack of cultural support. As the same report explained, studies of immigrants to the United States have found that rates of breastfeeding decrease with each generation, often because bottle feeding is considered the “norm,” and is more acceptable—and even encouraged—in America than in the immigrant families’ countries of origin.

This summer, as reported by Fox News, Vanessa Marcum, a mom of four in Butler County, Ohio, was shamed by a lifeguard while she was nursing her 3-week-old daughter by the side of the pool, and was told, “you can’t do that here.” Other moms, including Stephanie VandenBerg, who was nursing her infant son on an Air Canada flight in March of 2019, report being told to breastfeed in the bathroom.

Dr. Jay Gordon, a champion of breastfeeding and a pediatrician in private practice in Southern California, who has over four decades of medical experience, told me he believed pharmaceutical representatives and formula industry salespeople are a big reason why doctors end up undermining breastfeeding. Until he barred them from his office, drug reps would bring Gordon and his staff “free” lunches, “free” samples, branded pens and clipboards, and other free swag.

“What they [were] doing is biasing us, and often giving us information that [was] completely inaccurate,” Gordon said. Women listen to their doctors, Gordon argued, so if doctors actually recommended and supported exclusive breastfeeding, more Americans would do it.

“Pediatricians recommend brands of formula,”Gordon said. “The formula manufacturer who buys you lunch the most often, is liable to be the one you recommend the most. It takes too much time to help people with breastfeeding. We’re not reimbursed for that time. Instead of helping mothers with breastfeeding, we are telling them to use formula.”

Ravenel said that while he did recommend breastfeeding to his patients, he did not make a big deal out of it. “I would now, if I could do it over again,” he admitted. “Breastfeeding has a profound positive impact on the immune system. Breast milk is the ideal food. But I didn’t know that back then.”

Ronda Rousey, 34, a professional wrestler, actress, and martial artist, has been posting breastfeeding photographs of her new baby, La’akea Makalapuaokalanipō Browne, on Instagram. “Our boys asked me the other day how I’m gunna feed Pō on the plane when we take her with us to Hawaii,” Rousey wrote. “And I was like, ‘uhhh, same way I always do.‘ Then it occurred to me that they probably never seen anyone breastfeed before and weren’t sure if it was appropriate in public.”

Nursing moms like Rousey are using the grassroots hashtags, #normalizebreastfeeding and #nursingmom, to help encourage and inspire other women to meet their breastfeeding goals. Even though the formula industry wants to convince you otherwise, these moms are on a mission to let everyone know that a woman’s body makes the perfect food to help her baby survive and thrive.

Additional reporting for this article was done by Diane Sanny.