Wholesaler: Shen Yun, ‘We should all learn from this’ 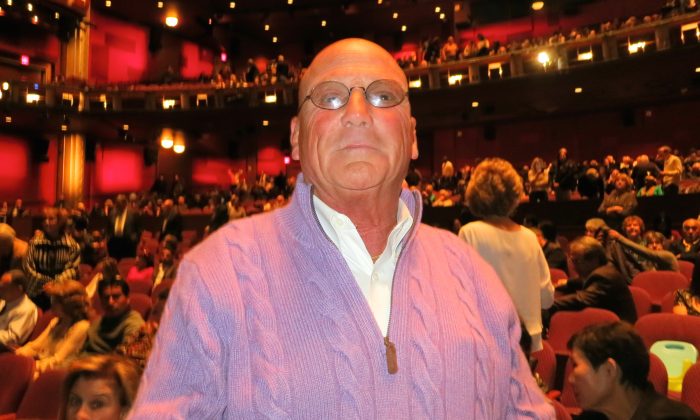 “I love this culture. It is amazing and the dancing to me, it’s beautiful,” he said.

Mr. Terry is a local resident and retired wholesaler. He acted as a distributor for over 20,000 products that made their way to drug stores and retailers.

Dance is part of the backbone of traditional Chinese culture. According to the Shen Yun website, “Classical Chinese dance has a long history of thousands of years, passed down continuously within the imperial palace and ancient Chinese theater and opera. Soaking up profound wisdom from every era and dynasty, it has become a complete system of dance.”

But dance by itself would not be nearly enough for a world-class group like Shen Yun; their one-of-a-kind orchestra did not go unnoticed by Mr. Terry.

The Shen Yun Performing Arts Orchestra is quite distinct from other orchestras. According to the Shen Yun website, “A Western orchestra plays the foundation, while traditional Chinese instruments lead the melodies. The sound produced is uniquely pleasing to the ear. The ensemble at once expresses both the grandeur of a Western orchestra and the distinct sensibilities of China’s 5,000-year-old civilization.”

Mr. Terry appreciated how in the modern day and age, Shen Yun conveys the traditional culture of the Chinese people.

The Shen Yun website explains about China’s traditions: “China’s three religions of Confucianism, Buddhism, and Taoism have been the bedrock of 5,000 years of Chinese civilization. Under the influence of these faiths, Chinese culture has generated a rich and profound system of values. The concepts of ‘man and nature must be in balance,’ and the five cardinal virtues of benevolence, righteousness, propriety, wisdom, and faithfulness have constantly played out over China’s 5,000-year-long history.”

Being an accomplished businessman, Mr. Terry understands the need for change but said, “I think that tradition is wonderful. I think growth is good, but my father always taught us, never forget where you come from.”

Unfortunately, many Chinese people today have indeed forgotten where they came from. According to the Shen Yun website, “Forcing atheism upon society, the Chinese Communist Party has for decades launched various campaigns—most notably the Cultural Revolution—to destroy not only cultural sites, temples, and relics, but also the Chinese people’s belief in virtue and faith in the divine.”

Included in this decades-long campaign has been the persecution of Falun Gong, a traditional Chinese meditation practice based on truthfulness, compassion, and tolerance, whose popularity could not be tolerated by China’s Communist Party. Upon learning of this ongoing cultural extermination lead by the Communist Party, Mr. Terry said, “I don’t understand any of this anymore. Look what’s going on over the whole world. We’re going to kill ourselves. It’s ridiculous.”

“This [Shen Yun] is what’s beautiful,” he said. “We should all learn from this, but we don’t.”