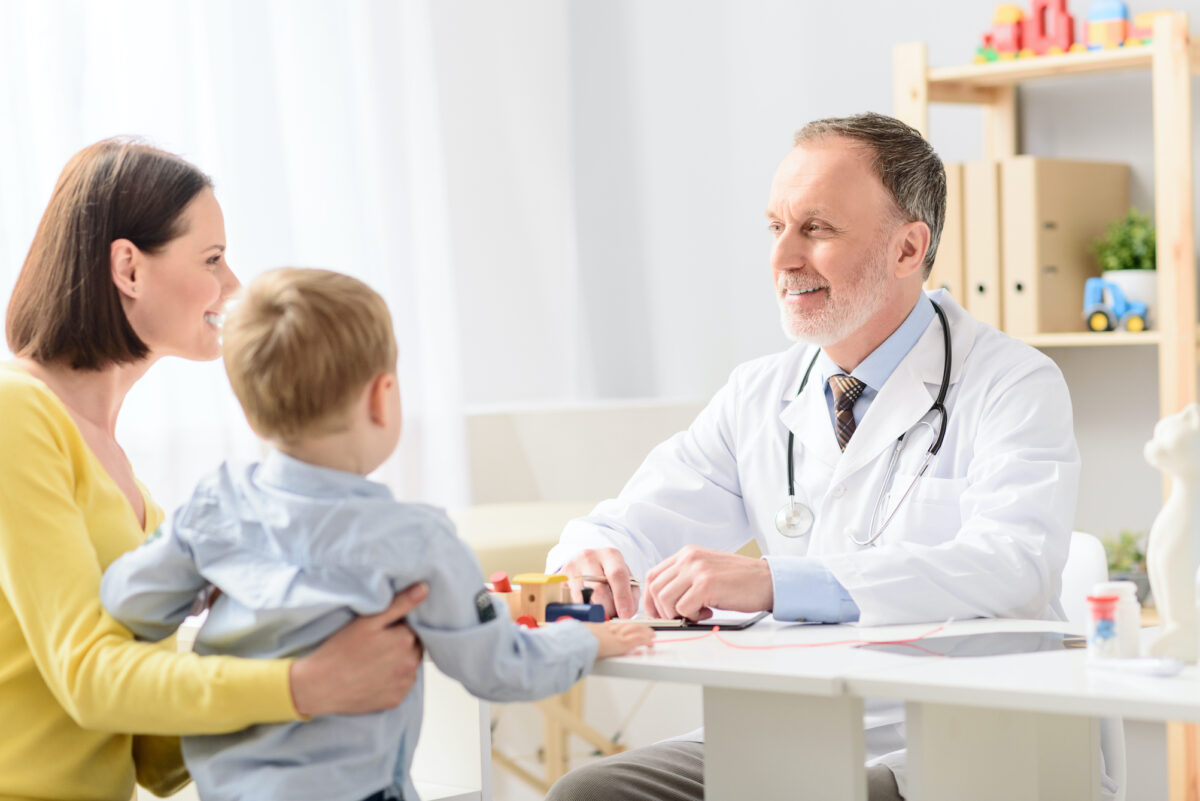 Vaccines can be a life-saving tool, but adverse events and controversial cell lines have some parents picking and choosing which vaccines to get and when to get them. (Olena Yakobchuk/Shutterstock)
Wellness

What Is a Vaccine-Friendly Plan?

When my children were 7, 5, and almost 3, our family moved to West Africa for a year. I’d been awarded a Fulbright grant to teach 19th-century American literature to English majors at the University of Abdou Moumouni in Niamey, Niger, as well as to do research on small-scale development projects.

We went to our local health clinic to undergo the extensive physicals required by the United States government and get prescriptions for anti-malarial prophylaxis.

We also talked to the doctor about the extra shots we needed, and rolled up our sleeves for vaccines. For one, we were heading to a country where polio was still endemic, so my husband and I needed a booster, which typically isn’t given to adults. For another, we needed yellow fever vaccines and, as we were going to the meningococcal belt, vaccines to protect us against that disease.

I was grateful for these vaccines to help us be as safe and healthy as possible overseas. After all, I knew that vaccines were a tremendous medical achievement and an important tool in the medical toolbox.

Vaccine-friendly doctors are doctors who understand that individualized medicine tailored to the needs of the patient results in the best health of the individual as well as of the community.

The term was coined by Dr. Robert Sears, author of “The Vaccine Book.” Sears, a pediatrician based in southern California, hails from a highly educated medical family. His father, Dr. William Sears, is the 82-year-old celebrity doctor and bestselling author known for promoting attachment parenting.

According to Leonard Hayflick, a biologist at the University of California–San Francisco whose work helped make vaccines more widely available, vaccines have saved at least 10.3 million lives.

In 2017, Hayflick was second author of a paper with epidemiologist and biostatistician Stuart Jay Olshansky, a professor at the University of Illinois. Their peer-reviewed scientific study analyzed the death rates for ten common viral infections prior to 1960 in order to estimate the number of infections that might have developed if no vaccines had been available. They concluded that 4.5 billion virus cases were averted, and 6.2 million lives in Asia alone were saved.

Why Pick and Choose Vaccines?

What that study failed to mention, however, is that the cell strain that Hayflick developed for vaccines for humans, WI-38, was derived from the lung tissue of a 3-month-old fetus, according to the company that sells them by the vial (for $520.00).

That baby had been legally aborted in Sweden. Her body was not incinerated or thrown away. Instead, it was wrapped in sterile cloth and sent to northwest Stockholm, to the Karolinska Institute, without the mom’s knowledge or permission, according to Meredith Waldman, author of “The Vaccine Race,” as quoted by the BBC.

The official position of the Vatican is that the good that results from vaccination outweighs the harm of abortion. Pope Francis has tweeted his support for vaccines. But some who adhere to religions that believe abortion is murder make the difficult and controversial choice not to give their children vaccines made with cell lines that were grown on aborted fetal tissue.

These include vaccines to protect against chickenpox, measles, mumps, rubella, and hepatitis A, among others, according to the CDC’s “Vaccine Excipient List,” which lists most of the ingredients in each brand of the recommended vaccines.

Nina Martinov is the founder of Slavic Voice, a political action group that, she told me, has over a thousand members who advocate for the concerns of immigrants from Eastern Europe.

Martinov says members are not anti-vaccine. But many are part of the Slavic Christian Community who choose not to use vaccines grown in human fetal fibroblast cells, because these cells were originally obtained via abortion.

“We object to vaccines made with cells from aborted baby fetuses. We are pro-life,” Martinov, who is based in Happy Valley, Oregon, said.

Similarly, some who belong to the Old Believers, and the Church of Christ, Scientist also choose to avoid certain, or even all, vaccines.

While Christian Scientists are deeply concerned with public health and individual responsibility, many choose to maintain the sanctity of their bodies and put their faith in the power of prayer instead of in vaccines.

Nonreligious Reasons to Forgo Some Vaccines

There are also several nonreligious reasons that some decide to forgo some or even all vaccines. People who are against animal cruelty and lead a vegan lifestyle object to the bovine serum albumin, Madin-Darby canine kidney cell protein, hydrolyzed porcine gelatin, and egg products found in some of the most common vaccines.

Others have had a severe adverse reaction to vaccines in the past, as Dr. Sylvia Fogel, a Harvard-affiliated psychiatrist who specializes in autism, pointed out in a 2019 article.

These parents have done a careful risk-benefit analysis with the help of their medical providers and have decided they would rather take the risk of catching certain diseases and dying from them than the risk of having another serious adverse event.

Still others disagree with the current CDC schedule and feel that there are too many vaccines given too soon (a sentiment recently echoed by European health officials in regards to COVID boosters, as reported by Voice of America).

These people want to say “no, thank you,” to certain vaccines—like chickenpox (which is usually a mild illness) and the birth and infant series of the hepatitis B vaccine (which protects against a sexually transmitted disease)—and “yes, please” to others.

In general, according to over a dozen peer-reviewed scientific studies, including a 2012 study by researchers in Colorado and a 2008 study by researchers in the United Kingdom, as well as testimony from medical doctors and researchers, the families that forego some or all vaccines tend to be well-educated, well-informed, and more affluent than parents who adhere to the government’s vaccination schedule without any modifications.

Paul Thomas is a vaccine-friendly doctor who has a thriving pediatric practice in Portland, Oregon. In 2016, we co-wrote a book together called “The Vaccine-Friendly Plan.”

The book is based on data from the over 13,000 children (which represent about 7,000 families) in Dr. Paul’s practice and a thorough review of the scientific literature.

Dr. Paul graduated from Dartmouth’s Geisel School of Medicine. A conventional doctor when he first started practicing, he began noticing that many children in his care were experiencing bad outcomes.

His colleagues told him the encephalopathy and other chronic developmental disorders he was seeing were “normal.” But the families in his care whose children were being diagnosed with autism, autoimmune conditions despite having no genetic predisposition, and other problems begged for answers.

Dr. Paul started to research the current CDC vaccination schedule. He learned that the United States has one of the most aggressive schedules in the world but that children from other countries with gentler schedules enjoyed better health outcomes.

He also found that when parents in his practice made judicious evidence-based modifications to the current schedule, including not giving their children acetaminophen, and avoiding over-exposure to toxins, their children thrived.

The vaccine-friendly plan is designed to keep children protected from communicable diseases but also keep their brains and immune systems healthy and intact. Several key parts of the plan are:

Since our book was published in 2016, Dr. Paul has also published two peer-reviewed scientific papers that share his data with the public, one in March of 2020 in the Journal of Trace Elements in Medicine and Biology and one in November 2020 in the International Journal of Environmental Research and Public Health.

Even though he gives vaccines in his office every day and I chose to vaccinate my children, Dr. Paul and I have both been accused of being “anti-vaccine.”

Our book’s recommendations are informed by both Dr. Paul’s clinical experience and over 300 scientific citations that readers can review in the endnotes. Yet CNN wrote an article in 2019, “Anti-vaccination conspiracy theories thrive on Amazon,” that accused the book of peddling “misinformation” disguised as being neutral. Dr. Paul’s license has been under almost continual scrutiny by Oregon’s medical board.

It should be the case that medical practices where patients are enjoying better outcomes than average citizens lead the way to better public health policy. Instead of vilifying vaccine choice or falsely labeling doctors or journalists as “anti-vaccine,” we should celebrate the good outcomes, figure out what empowered patients are doing right, and encourage others to follow suit.

Jennifer Margulis, Ph.D., worked for Africare/Niger from 1992 to 1993 where she directed a project to build a hangar for handicapped artisans, provided support for rural farmers to garden in the off-season, and worked on the literacy component of a child survival campaign. She returned to Niger as a Fulbright grantee from 2006 to 2007. An award-winning science writer, she is also the author of “Your Baby, Your Way” and co-author of “The Vaccine-Friendly Plan: Dr. Paul Thomas’s Safe and Effective Approach to Immunity and Health—From Pregnancy Through Your Child’s Teen Years,” among other books. Find out more at www.JenniferMargulis.net