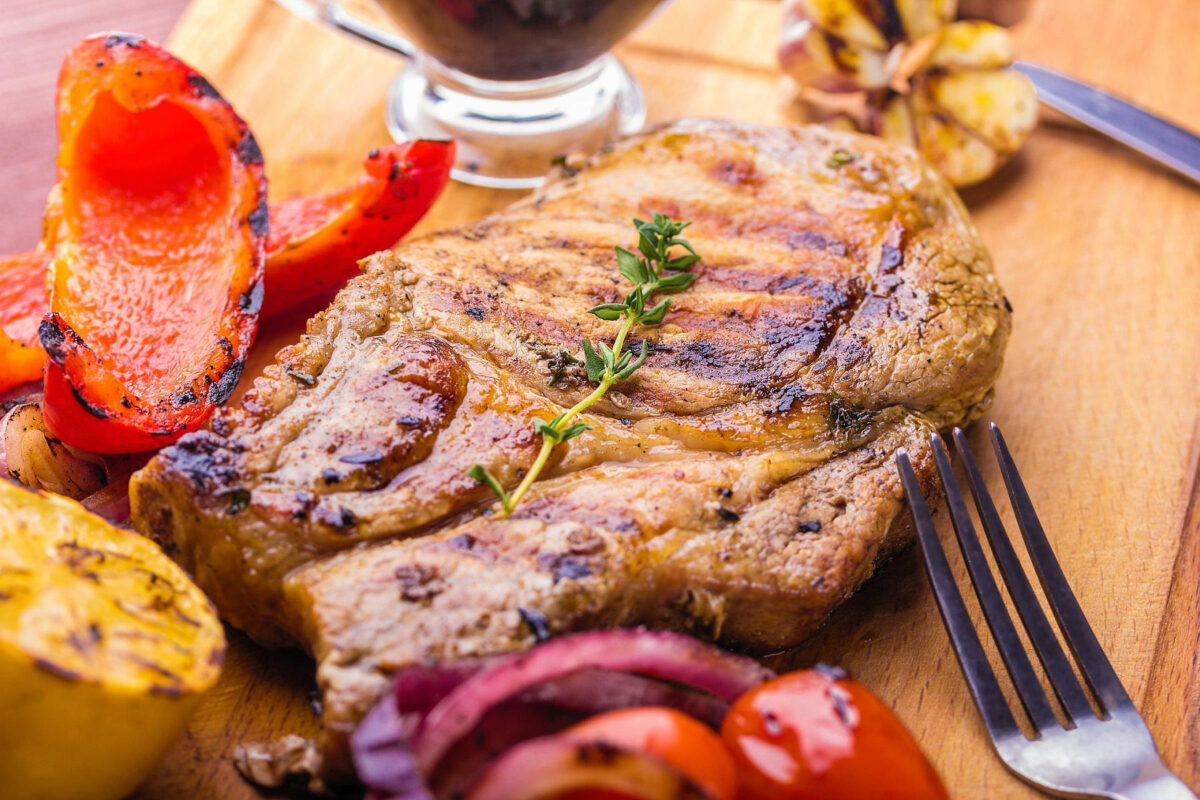 What Are Pork Steaks?

When you have a hankering for pork and need a quick and easy weeknight dinner, odds are you head to the grocery store and pick up a pack of pork chops or a pork tenderloin. These popular cuts of pork are affordable and cook quickly, making them an easy go-to. But they tend to lack one thing: flavor. That’s where the pork steak comes in.

While this cut is massively popular in the St. Louis region, pork steak is just starting to get the nationwide attention it deserves. Here’s everything you need to know about pork steak and why it’s more than worthy of a place on the butcher block and the dinner table.

What Is Pork Steak?

Although where the pork steak comes from can vary by butcher and by region, it most frequently comes from the top shoulder and neck of the pig, also known as the Boston butt and the coppa, respectively. These parts of meat have a lot of gorgeous fat marbling, which means they are juicy, tender and have a lot of porky flavor.

“While we’ve been trained to look for no fat, the fat is what you want for flavor. And it’s not as bad for us as we’ve been told,” says Camas Davis, butcher and founder of the Good Meat Project. “To me, the chops that we typically eat are the least interesting because they don’t have intermuscular fat.”

How Do You Cook Pork Steak?

The Boston butt is most commonly used for slow-cooking preparations; think of barbecue pulled pork, slow cooker pork and sauerkraut or carnitas. But when cut thinly and against the grain — as a pork steak is — this well-marbled piece of meat can be grilled or pan-seared in a matter of moments, just like how you would cook a beef steak.

“Steak just means, like, you’re cross-cutting a muscle — maybe there’s a bone in it, maybe there isn’t,” Davis says. “Even though [with] the coppa and the Boston butt, you typically have to braise or roast, if you cut it thin enough and maybe do a little marinating or tenderizing ahead of time, it’s super delicious.”

Cooking pork steak is easy. When I first bought pork steak, under the name pork collar steak, the merchant at the Roaming Acres Farm booth at Brooklyn’s Grand Army Plaza Greenmarket said he simply seasoned it with salt and pepper and cooked it in a hot cast-iron skillet. That non-recipe recipe has been pretty much my go-to ever since. Just add a little oil or butter to your pan and sear the pork steak on each side until it reaches an internal temperature of 145F. You can also get a similar result by cooking your pork steak on the grill.

Of course, you can get creative with your seasoning. A steak rub, either store-bought or homemade, translates perfectly to this cut of meat. You could also give it a quick marinade, but the meat is tender and fatty enough that a marinade isn’t really necessary.

Where Can You Buy Pork Steak?

Unless you’re in St. Louis, where this cut is a regional favorite, or other parts of the Midwest, odds are you won’t necessarily be able to buy pork steaks at your local grocery store. If you’re lucky, you may be able to find them at a farmers market or butcher shop.

If pre-cut pork steaks aren’t available, don’t be afraid to buy a full Boston butt. Ask your butcher to cut it into 1-inch thick steaks for you. You can also buy a boneless Boston butt and cut the steaks yourself, but be sure you have the kitchen skills and a very, very sharp knife before doing so.

Pork steaks will change the way you look at pork. They’re versatile, affordable and rich in fat and flavor. But if you’re not sure whether or not this is the piece of pork for you, read up on every cut of pork you need to know.