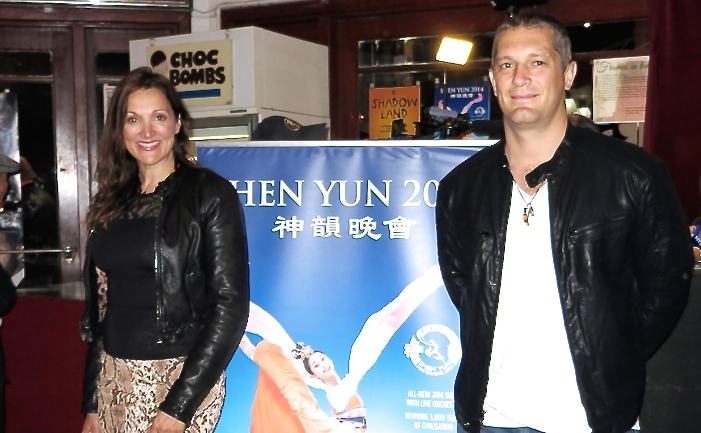 PERTH, Australia—“It was absolutely extraordinary in every aspect—talent and obviously the incredible execution of quality, of workmanship,” said wedding gown designer Donna Tobin. She had just seen Shen Yun’s opening performance to a full house at Perth’s Regal Centre on May 1.

“The costumes were just breathtaking,” Ms. Tobin said. “I found myself feeling so excited, going ‘I want to take that design for my next collection.’”

The New York-based company accentuates the dancers with handcrafted costumes and traditional stage props such as scarves, chopsticks, and swords. Each tell a story, such as an embroidery hoop seamlessly accenting a lady’s feminine grace, the company’s website states.

“In Western culture, we seem to have everything so low-cut, bare. I just had respect for that covering of the body and how feminine and elegant it looks, all covered—so colorful and so beautiful. Gorgeous!” Ms. Tobin said.

The fashion industry has acknowledged Donna Tobin Couture’s creative designing, innovative use of fabrics, pattern cutting and manufacturing techniques with awards every year of the Western Australian Fashion Design Awards, including the 1997 Fashion Designer of the Year.

“I think the soft, flowing, chiffon ballerina-style skirts …  And I just couldn’t believe the level of dancing, [the] grace and harmony of the garments.—I think that brought a lot of emotions to a lot of people tonight.”

Ms. Tobin also found a message in the performance. “I believe it’s something more than just a show. I absolutely had tears in my eyes when the soprano was singing about realizing our true destiny and how things throw us off our guard in life,” she said.

“The persecution in China—it saddens me,” she said of the communist regime’s persecution of Falun Gong practitioners. Falun Gong (also called Falun Dafa) is a traditional spiritual practice of meditation, exercises, and moral self-improvement that was introduced in China in 1992.

Based in New York, Shen Yun Performing Arts was established by a group of classical Chinese artists with the mission of reviving China’s ancient, divinely inspired culture.

The Chinese communist regime, on the other hand, has endeavored to eradicate the traditional culture through campaigns like the Cultural Revolution.

“I believe that if you believe in the truth, be patient, there will be true harmony, and people will one day have freedom and space, and they will be able to live their lives in harmony and peace,” Ms. Tobin said. “From deep in my heart, I do wish this for everybody.”

Ms. Tobin felt enlightened after her Shen Yun experience. “To me, it’s one-of-a-kind. It’s definitely something to reach a form of enlightenment within yourself—to watch the show and understand its true value.”

Dino Machado, who accompanied Ms. Tobin, felt a connection with the ancient culture. “I have an affinity to Asian culture and traditional dance and the Falun Gong … so I found it quite stimulating,” he said.

“The show was wonderful, really incredible. It was heartfelt, had really strong meaning, strong cultural and ethical background to it, with a lot of tradition and some folk stories blended in. It was really a history of China. Wonderful!” he said.

Mr. Machado, who is involved in sales, could see the importance of Shen Yun returning to Australia next season. “I think a lot of people would be very interested to see this. You know, China is Australia’s major trading partner, and we’d like to know more about China and its people and its culture. I find it very beautiful.”

Mr. Machado plans to recommend Shen Yun to family and friends. “Top marks! Really a great spectacle, visually pleasing, colorful, vibrant. I left with a peaceful feeling. … It was like a cleansing,” he said.