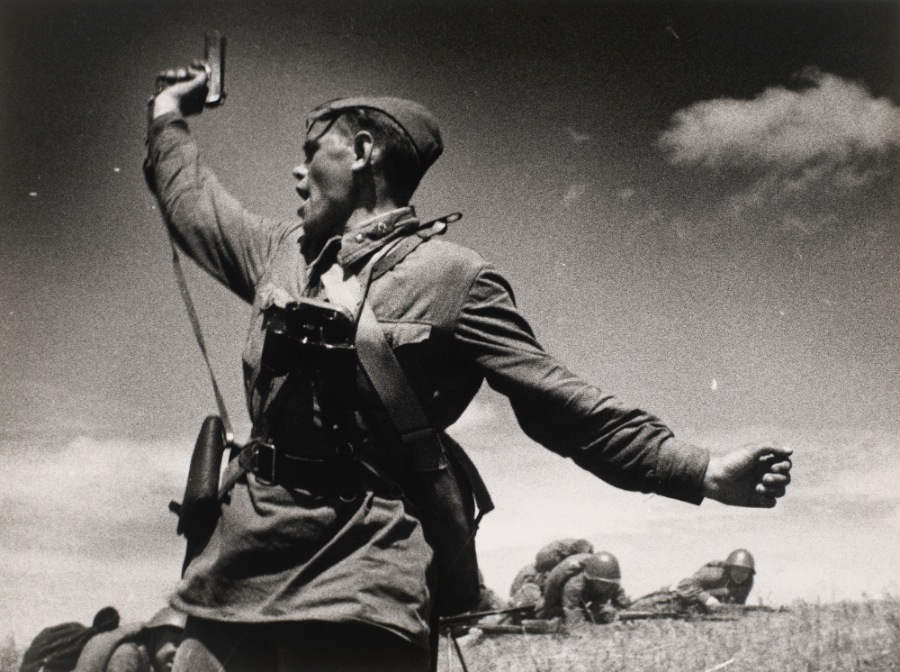 War and Photography Intersect in a Powerful Exhibit

A gut-wrenching exhibit of 400 photos and objects, WAR/PHOTOGRAPHY arrives at the Brooklyn Museum.

NEW YORK—Having served as a five-star general in World War II, President Dwight D. Eisenhower famously said, “There is no glory in battle worth the blood it costs.”

Neither is there glory in WAR/PHOTOGRAPHY, a traveling exhibit organized by the Museum of Fine Arts, Houston that has come to the Brooklyn Museum, its final stop.

It’s a rambling collection of succinct images. There could be no other way to bring to life this ugly fact of human civilization. From instigation, conscription, and deployment, to physical and emotional trauma, wartime medicine, the role of religion, political rationales, to civilian impact, war has so many facets and consequences, each of which is given space here.

The collection of 400 photos and objects represent more battles than you knew existed, more rubble and corpses than the mind’s eye can hold, and more suffering than one can stomach.

A little girl in 1980s El Salvador comes out onto her porch to find a man there, murdered for violating the curfew set by the president. In Mogadishu, a man digs a grave by the side of a road for yet another starvation victim. His shirt hangs onto his meager back. A cat nuzzles the face of an already-bloating corpse, the victim of shelling in Chechnya. Toddlers in the Middle East tote toy guns, emulating their war-bound fathers and brothers. Around the corner from this, a boxed GI Joe figurine is on display.

This is not an exhibit about the photojournalistic genre of war photography—it’s about the ways that photography can capture and make real war’s human drama, something that can be so easily abstracted by rhetoric.

These photos do not come cheaply. Photographers are not granted a protected bubble from which to make poetic images—they live among and too often die along with their photographic subjects.

The Lens Against the Barrel

The documentary image is powerful—it’s evidence of atrocities and a potential tool in propaganda. Authorities in every war know that and try to control the images created and distributed.

Ron Haviv, Louie Palu, and other photographers have repeatedly risked their lives to shoot where they weren’t supposed to.

Haviv freelances and has shot major conflicts and humanitarian crises for 25 years. Palu has for seven. He covered the war in Afghanistan and is currently shooting inside Mexico’s drug war.

Haviv said that photography on its own can’t change the world, but it can be a call to action.

These photos also give perspective to the things that are important.

When Palu came back from Afghanistan, he was still so shocked by the environment surrounding military bases that he had to circle his block for 30 to 40 minutes before feeling safe enough to get on the subway. Then he’d wait in line at the supermarket and overhear arguments so mundane that the contrast with his own recent experiences would be hard to bear.

“It’s about instigating a dialogue, and I think these photos can empower you,” Palu said. “And I think being empowered by a photograph is one of the greatest gifts we have as thinking human beings.”

The powerful thing about presenting conflict through images is that pictures bypass identity politics.

Starry-eyed young people of every nationality go to war with the same naive zeal. Persons shot, hanged, executed, and bombed-apart die with the same pained and vacant stare—no matter what ethnicity or ideology.

“It was very important to us to have images from both sides,” said Anne Wilkes Tucker, photography curator at the Museum of Fine Arts, Houston. “We have German photos from World War II as well as [from] the Allies, and we really sought out pictures by North Vietnamese photographers.”

If cable television has done a good job of developing in us sympathy for “our boys,” this exhibit will expand that feeling into a broader sense of pity for humanity as a whole.

WAR/PHOTOGRAPHY: Images of Armed Conflict and Its Aftermath
Nov. 8–Feb. 2, 2014