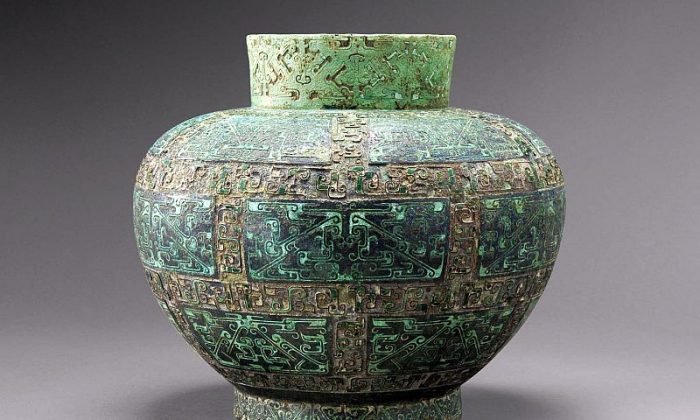 PARIS, France—An extraordinary voyage through mythical China, its successive rulers, rituals, and periods of war and peace, is offered to visitors of Paris’s Guimet Museum (www.guimet.fr) in a rare collection of ancient bronzes.

More than a hundred pieces, from the Meiyintang collection and among which the most ancient date from the 2nd millennium BC, are presented to the French public for the first time. The exhibit runs until June 10.

The exhibit starts with two reproductions of 18th century paintings, picturing scholars in the process of classifying ancient bronzes, a mise en abyme that draws the viewers’ consciousness to themselves.

Marie-Catherine Rey, head curator of the Chinese section at the Guimet museum, describes it as the writing of Chinese history through its bronzes from antiquity. Bronzes are similar to what is called regalia in the West, the most precious objects of a ruler that are passed on from dynasty to dynasty.

The visit, arranged by themes and chronologically, invites us in different settings: a banquet, monumentality, bestiary, war and peace, and humanism. Each time period and its aesthetics; each dynasty has its established customs and moral standards.

If we are used to associate the bronze age to weapons, and therefore war, the exhibit shows us another aspect of the metal.

“In China, very early, bronze was used to make ritual objects for sacrifices to the heavens, the notion of ritual is a heritage from Neolithic man. We now know that the Neolithic age flourished throughout all regions in China. Since it has always been said that Chinese civilization emerged in the Yellow River, in the Central plains, but with all these findings, we know that there was a force of assimilation,” explains Huel-Chung Tsao, research analyst at the Guimet museum.

Rey refers to an owl adorning a Neolithic bronze piece.

What is worth noticing and is also disconcerting and seducing by the same token is that details are extremely precise, but any attempt at identifying what they represent is improbable.

The typical example of this is the taotie motif, which has been described variously as a “hungry beast,” or a “beast mask.”

In this motif, a central axis that represents the middle of the mask separates its two eyes. It seems like you are looking the creature in the face, but if you look at one side of the mask, it extends out as a dragon or a snake seen in profile.

The artistic transition between the Shang Dynasty (1600–1046 BC) and the Zhou Dynasty (1045–256 BC) is not always easy to distinguish because the same artisans worked through both periods, continuing the legacy of their ancestors.

The Zhou dynasty’s justification for the overthrow of the Shang is that they abused alcohol and became tyrants. Heaven took the rule from them and mandated the Zhou. Rituals changed and the Shang’s fermented drink goblets were replaced by cereal and water vessels.

In the Zhou period, a bronze industry develops. Specialized workshops appear for drawing, mould making, and polishing, each one with a well-defined role inside the production process. Major industries are centralized in the Central plains but local manufacturers exist everywhere.

Bronzes were so important to the elite that the political structure evolved around bronze production.

“There is a whole organizational process that started already with the Shang, who moved the capital several times to get closer to raw material,” explains Mrs Tsao.

Because of their use as ritual objects, these pieces take on a sacred dimension. The object’s purpose was to communicate wishes to the heavens. One can feel this mysterious force. In later times, these objects lose their religious character and become luxury objects showing a prince’s wealth.

“It’s like the pieces from the Middle-Ages in Europe compared to those from the 18th century,” Tsao said. “In these liturgical objects from the middle-ages in Europe, one can feel an internal force emanating. Similarly for the Anyang period, one can feel that there is more than a well-sculpted object.”

Starting with what we call the Western Zhou period (1046–771 BC), shapes become simpler and more geometrical. Symmetry changes and becomes circular. Serpents and dragons are reduced to waves and lines.

It’s also when music becomes a mark of nobility, a symbol even stronger than weapons. The western Zhou start to codify rituals with the introduction of different-sized bronze bells for sounding notes. Music sets apart nobility from the non-civilized.

Even in functional objects like a fighting tank’s parts, vocabulary of an imaginary nature are used, and instruments of war become objects on parade. Objects for women are more refined: small boxes inlaid with precious substances, jade, fine and feminine pieces.

Around the 6th century, the influence of the steppes is remarkable. Hunting scenes are used extensively as decoration. A beautiful example of this can be seen on a small box adorned with four small mobile birds that can change direction. Due to the same influence, bronze is inlaid with silver and gold.

The forming die is introduced, enabling the reproduction of a pattern at will. Before that, each mould was a disposable piece that had to be broken to free up the piece of bronze during casting.

Archaeological excavations have changed preconceived ideas even for the Chinese, Tsao said.

“Some similarities can be found with Mesopotamian pottery, but what is typically Chinese is the writing, which transcended centuries, in most cases on bronze. Bronzes have proved the authenticity of the historian Sima Qian’s writings (141-86 BC.), which was argued about for a long time, as he wrote the history of China since its creation.”

Natalie Gee contributed to this report.