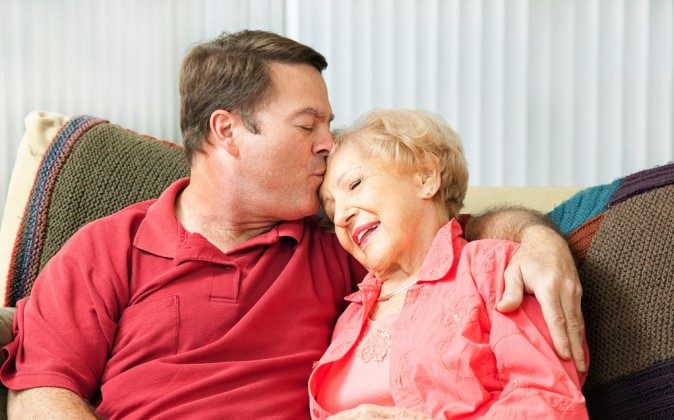 Senior woman gets a kiss from her loving adult son who has come to visit her in the nursing home. (Shutterstock*)
Good to Know

The most comprehensive study yet to be conducted on the subject has revealed that vitamin D levels really do affect dementia risk. An expert, multidisciplinary team of researchers hailing from some of the best schools in the world found that elderly folks severely lacking in vitamin D are more than twice as likely as other adults with normal or optimal vitamin D levels to develop Alzheimer’s disease or other similar forms of mental illness.

Published in the peer-reviewed journal Neurology, the study involved looking at 1,658 adults aged 65 years or older. All of the participants were healthy at the beginning of the study, able to walk without a walker and free of heart disease. Researchers tracked all of them for six years, paying close attention to those who developed some form of dementia and comparing vitamin D levels across the board.

What they found was a strong association between low vitamin D levels and elevated risk of dementia. Among those who were moderately deficient in vitamin D, for instance, a 53 percent increased risk of general dementia was observed. And specifically for Alzheimer’s, those with moderate vitamin D deficiency were found to be 69 percent more likely to develop the condition than others were.

The risk was even higher for those with vitamin D levels in the “severely deficient” range, which is somewhere between 25 and 50 nanomoles per liter (nmol/L) of vitamin D. For Alzheimer’s, the risk was 122 percent higher among those with a severe deficiency. And for general dementia, the risk was a whopping 125 percent.

The researchers involved had expected to observe some correlation between low vitamin D levels and dementia. But they admit that they were unprepared for the drastic variance they observed, which serves as a wakeup call for the millions of aging “baby boomers” who already have an elevated risk of mental illness.

“We expected to find an association between low Vitamin D levels and the risk of dementia and Alzheimer’s disease, but the results were surprising — we actually found that the association was twice as strong as we anticipated,” stated Dr. David Llewellyn from the University of Exeter Medical School, one of the study’s authors.

The results are hardly surprising when considering the vast benefits already associated with vitamin D intake, however. The Vitamin D Council outlines more than 40 health conditions that modern science has identified as being associated with low vitamin D levels, which is easily correctable through increased sunlight exposure and supplementation.

“Clinical trials are now needed to establish whether eating foods such as oily fish or taking vitamin D supplements can delay or even prevent the onset of Alzheimer’s disease and dementia,” added Dr. Llewellyn. “Our findings are very encouraging, and even if a small number of people could benefit, this would have enormous public health implications given the devastating and costly nature of dementia.”

“During this hottest of summers, hitting the beach for just 15 minutes of sunshine is enough to boost your vitamin D levels,” he is quoted as saying by the University of Exeter.

Since there is no adverse risk involved, why not bring your vitamin D levels into optimal range?

*Image of “mother and son” via Shutterstock