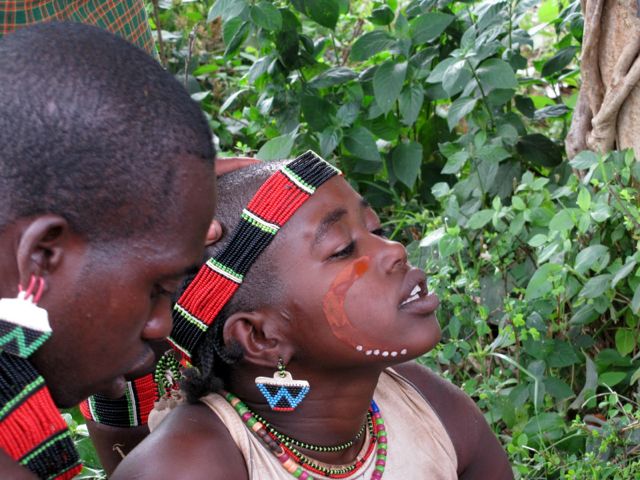 Visiting the Tribes of Southwest Ethiopia for Cheap

This is based on a trip I did to some of the tribes in south-west Ethiopia back in 2010 with two others. But having given the advice on how to do it to two travelers recently in August 2013, they say the advice is still valid today. Many travelers in Ethiopia are interested to see the traditional tribes of Omo and Mago national parks and others, but are put off by the expensive prices of the tours to get there. So here is some advice on how to do it cheaply, and also most likely have a much better experience than being on a tour.

We started in the provincial town of Konso in the south-west. Here we asked around a few local people around the crossroads in the center of town, around the coffee-shops and bars. We asked for someone who knew the area where some of the tribes were, and who could speak with them. We found a guide and paid him US$25 a day to take us, the two travelers I gave advice to recently said they paid 30. We decided to hitch-hike to save money on expensive 4WD rentals. The guide was very useful in organizing a lift to the town of Turmi inside the tribal region. Expect to pay some tips to the people who give you a lift, US$5–10 should be good.

According to the government, tourists are not allowed to use public transport (which is extremely limited anyway), and must have their own car. But we didn’t have to much trouble with hitching rides. Except for one day near Turmi where we waited for several hours under a tree for any vehicle to come, and none did.

But there was a local village nearby and the tribe was intrigued at these strangers sitting under a tree and not in their own 4WD car. The tribe are used to the expensive tour groups coming in, taking photos for 20 minutes, then going away. So they came over, and through our guide translating, talked with us, sat with us, laughed with us and generally hung out for many hours. It was interesting to see a tour show up, and they all disappeared to the village to put on a tourist show for 20 minutes, then came back to relax with us.

When a lift never came, a Hamar man from the village walked us in the African twilight, a magical experience, through the bush back to Turmi to stay for a night. We managed to hike to some villages in the middle of nowhere where cars do not go, and they are not used to tourists. Here you can camp in your own tent near the village, or there is normally a hut to sleep in with teachers in the region. You most likely will be able to eat and chat with the tribe , paying no money, and really get a unique experience. The Hamar tribe we stayed with were getting ready to celebrate a boy coming of age, and everyone was drinking and celebrating at night, we joined in!

The next day they started face painting each other, the women were very drunk as they prepared for the ancient tradition of being whipped by the men as a show of their love. It is a spectacle not for the weak hearted, I personally did not like it, but it is their tradition. We spent all morning with them, the same tribe we stayed with the night before, and felt like we knew them pretty well now, and were accepted easily amongst them.

Then the boy coming of age had to jump over several bulls, back and forth a few times to show his manhood. This is a major tourist attraction, and out of nowhere the expensive tour groups showed up in their cars, took photos for 1 hour or so, then went away. It was strange seeing all the tourists showing up after being alone with the Hamar tribe for so long. The bull running felt like a human zoo attraction…

When you get a lift to places it will probably be with an Ethiopian driving around the area. There are not many vehicles so expect to wait. We came across a river after one such lift, and had to cross the crocodile infested river in a small local canoe that barely floated! After which we hiked through the sweltering heat of a forest to get to some open plains. Here we ran into tribes we hadn’t seen before, different from the Hamar. Some ran away from the cameras scared, and in the middle of nowhere it felt very exotic and foreign.

We stayed the night in a local town nearby. There are small towns scattered around the tribal areas, and all have rather basic, not so great budget hotels, but are handy for moving around. Bring a tent if you can, so you can camp around the villages, or ask to sleep in a hut in the village. Expect to pay a small tip to sleep there, maybe 100-200 birr.

How to Travel to the Tribal Regions of Ethiopia for Cheap

I won’t go into lots of detail about our trip into the tribal regions of Ethiopia, this post was just to give you a rough idea of what can be done. If you have a lot of time it is better, as no lifts are guaranteed, and you may have to spend more time than you think. Between 3 of us we paid about US$25 a day per person, including guide, tips for lifts, cheap hotels and food, and all to have a very unique experience.

Compare that to the tours that charge US$100 upwards per person, and for the budget traveler the way we did it makes more sense. Of course if you have limited time and want to be safe, then taking a tour to get a feel of the place is fine as well. You may have to budget US$50 a day to be safe when doing it yourself just in case, but it should be much cheaper. It is also better not to go in a big group, as getting a lift you may not be able to get everyone in the car. Your guide and maybe 3 people maximum should be good. If you are heading to the tribes I hope this advice will come in handy and you have a great time!