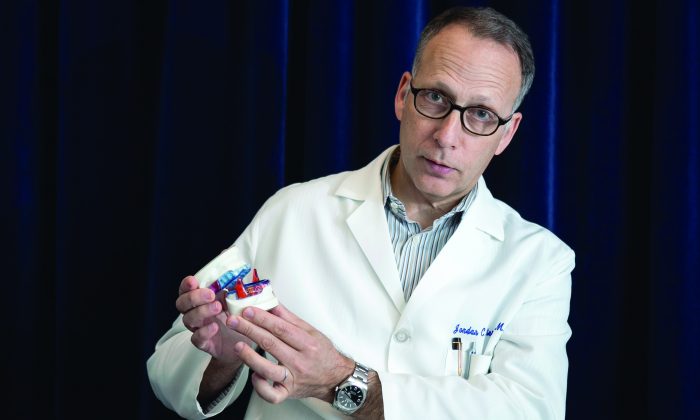 Unrested and Untested: Millions of Americans and Their Doctors Don’t Know They Have Sleep Apnea

NEW YORK—Sleep-apnea testing can mean the difference between life and death.

The conductor driving the Metro-North train that crashed last year is a case in point. The conductor had undiagnosed severe sleep apnea, so even though he was able to fall asleep and stay asleep just fine, he was unable to get the deep sleep necessary to be alert throughout the day.

Sleep apnea is when breathing becomes shallow and stops altogether during sleep. When a person stops breathing, blood oxygen levels are lowered.

With obstructive sleep apnea, the most common form, the low oxygen levels send warning signals to the brain to wake the body up enough to restart breathing. This often happens with a loud choking or snorting sound, and the person breathes normally for a while before stopping again.

This cycle repeats throughout the night and prevents people from entering into deep sleep and REM sleep, needed for feeling rested and energized.

Yet it is still not commonly tested for. This is because—as is the case with most scientific fields—research is far ahead of training and practice. In particular, the field of sleep medicine is relatively young, and medical schools do not offer much training in sleep apnea, according to Dr. Jordan Stern, founder of blueSleep, a center to treat apnea and snoring in lower Manhattan.

After 10 years as an ear, nose, and throat doctor who specialized in surgery for head and neck cancer, Dr. Stern became interested in sleep apnea when he started researching it.

He worked as a consultant to a French company that was developing home testing devices for sleep apnea. Through this job, Dr. Stern participated in clinical trials to test the devices, co-authored several papers on them, and became aware of a huge, costly gap in the diagnosis and treatment of sleep apnea. This realization led to him to go back for board certification in sleep medicine and to open blueSleep.

Based on his research, Dr. Stern estimates about a third of Americans have problematic sleep apnea, but about 90 percent don’t know it.

When he went through medical school to become an ear, nose, and throat doctor (otolaryngologist) he got no training about sleep apnea, and said when he speaks to current medical students, they report having had very little training.

“The majority of doctors still don’t have a good grasp about how extensive this disease is,” Dr. Stern said.

Many different factors can cause breathing to become shallow or stop altogether while you sleep, and it’s actually normal to stop breathing less than five times an hour as your body goes through certain sleep phases, Dr. Stern said.

A common misconception about sleep apnea is that it exclusively affects overweight people. Obstructive sleep apnea, which is when a person’s airway becomes partially or fully blocked during sleep, does frequently arise in overweight people when excess fat thickens the tissue around the windpipe. However, it can also occur in anyone due to features like a small chin or a large tongue or tonsils that block airflow.

A relatively higher number of Asians have obstructive sleep apnea, Dr. Stern said, because of the morphology of their head and neck.

In children, enlarged tonsils are a common of cause obstructive sleep apnea and can often be cured by a tonsillectomy or adenoidectomy (removal of tissue at the back of the nasal cavity).

The less common form is central sleep apnea, which occurs when the brain does not send the right signals to the muscles that are responsible for breathing. Central sleep apnea can develop for a variety of reasons, including as a side effect of taking opioids, and due stroke or congestive heart failure.

The most common sign of sleep apnea is loud snoring although not all people who snore have sleep apnea. People can have apnea without snoring, but this is rare.

In children, difficulty learning, behavior problems, and ADHD are signs of sleep apnea. The American Sleep Apnea Association says studies suggest that as many as 25 percent of children with ADHD have obstructive sleep apnea.

The only way to know whether you have sleep apnea is to have your breathing evaluated during the course of a night. Until 2008, the only way for most people to be evaluated was spending a night in a sleep clinic.

Then six years ago, Medicare approved and started paying for, patients to be tested with devices they could take to their homes—the devices Dr. Stern was testing.
While testing in a sleep clinic is necessary if doctors need brain-wave tests or to observe sleep behaviors, Dr. Stern said the take-home apnea tests diagnose sleep apnea with 98 percent accuracy and are a lot more convenient than spending a night in a clinic.

The devices, which are about the size of a deck of cards, record your airflow, the sounds you make at night, and can tell which side you are sleeping on. The apparatus also includes two belts that measure the expansion and contraction of your chest and abdomen, a sensor that straps to your wrist, and a finger clip that measure heart rate and the blood-oxygen levels.

And the tests are pretty fail-safe, according to Michael Henning, a certified sleep technologist  who works at blueSleep. If need be, he can program the device to automatically turn on at a patient’s bedtime, so people—such as the elderly—who are unfamiliar with technology will still be tested.

For those who are more tech-savvy, the devices can also be turned on manually.
It takes about 15 minutes to generate a night-long report from the home testing device after they’re returned (as opposed to a week or more from a sleep lab), so patients find out the next day if they have sleep apnea.

Treatments for sleep apnea depend mostly on the cause—not necessarily on the severity of the condition. Treatments can be as simple as eating earlier in the day or as complex as reconstructive jaw surgery.

CPAP therapy requires patients to wear a face or nose mask all night, so a continuous stream of purified air can keep their airways open. This can be uncomfortable as well as embarrassing for some—especially young singles, Dr. Stern said. He estimates that less than 50 percent of people on CPAP keep using it after the first five years.

“The compliance of that treatment is very bad, so it ends up not being a very good treatment,” Dr. Stern said.

A relatively new treatment for patients with mild or moderate sleep apnea is cauterization of the base of the tongue with radiofrequency. This is a minimally invasive surgical procedure that heats the tissues of the nose or throat to a temperature hot enough to damage them but not hot enough to burn or char.

This causes scar tissue to form, which as it heals, shrinks the tissue, leaving more space for breathing, Dr. Stern said.

The procedure takes about two minutes, requires only local anesthesia, and afterward, patients usually need a couple of over-the-counter painkillers for discomfort the next day, he said.

A course of treatment usually runs around six months with patients coming back every six to eight weeks to repeat the procedure and increase the scarring.

For some patients with all levels of apnea, custom-made oral appliances can be curative. The appliances look like heavy-duty retainers that fit on the top and bottom jaw. They connect with an adjustable connector that keeps the jaw forward and prevents the tongue from falling in the throat and blocking it.

A big barrier to the treatment of sleep apnea with oral appliances is that most dentists who would be willing and able to make them for patients don’t accept medical insurance. “So in most cases, the treatments that they offer are very expensive,” Dr. Stern said.

One of the staff members at blueSleep is a dentist, and the oral appliances that patients receive at the center are covered by insurance.

When obstructive sleep apnea is caused by excess fat, losing weight—whether through diet and exercise or bariatric surgery—can cure the apnea.

Sleep apnea also often goes hand in hand with acid reflux. People with severe sleep apnea all have reflux, Dr. Stern said, because when their oxygen drops, the natural response of their body is to relax the valve on their stomach, which opens and spills the contents of the stomach into the throat.

“Once you treat apnea, the reflux gets better,” Dr. Stern said. Conversely, severe reflux can also cause apnea by irritating and swelling the throat tissues.

To address the acid-reflux issue, Dr. Stern co-authored a cookbook, “Dropping Acid: The Reflux Diet Cookbook and Cure,” which became a best-seller.

Many patients with sleep apnea also have insomnia, which makes it difficult for them to fall or remain asleep. Since most insomnia is related to anxiety, part of the treatment is relaxation treatment.

To help patients relax, Dr. Stern has commissioned three CDs with collections of famous classical pieces specifically chosen and ordered so as not to wake the brain up.

“We kept everything relatively quiet with pieces getting a little bit longer, a little bit more boring [toward the end],” he said.

A big issue in apnea treatment is that most doctors are not familiar with the gamut of treatments available, and so are likely to prescribe what they are most familiar with. Thus a surgeon would tend toward surgery, a dental technician would go for an oral appliance, and a general doctor would prescribe CPAP, Dr. Stern said.

Dr. Stern founded blueSleep to offer sleep apnea patients the kind of care a cancer patient would get—a team of specialists who work together to evaluate the patient’s situation and together with the patient’s input, decide on the best course of treatment.

On staff at blueSleep are a head-and-neck surgeon; a dental surgeon; a board-certified pediatric ear, nose, and throat surgeon; a speech-language pathologist, and a registered dietitian.

$165 billion
The estimated annual economic impact of sleep apnea, according to a Harvard Medical School McKinsey & Co. report. This is more than asthma, heart failure, and hypertension.