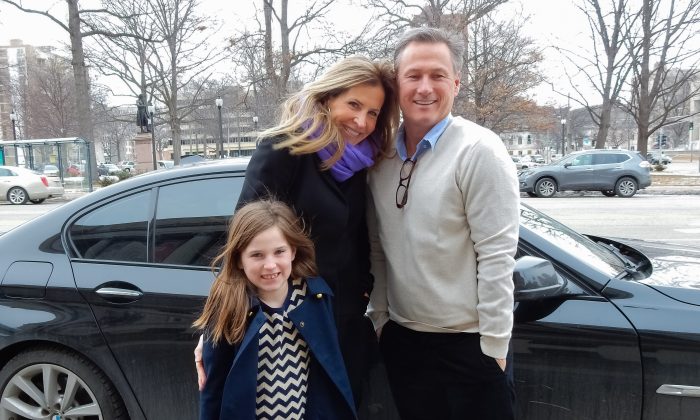 Dan and Katie Curran and daughter, Katherine, found Shen Yun to be uplifting, at the Peabody Opera House on Feb. 22. (Stacey Dong/Epoch Times)

“Through the universal language of music and dance, Shen Yun weaves a wondrous tapestry of heavenly realms, ancient legends, and modern heroic tales, taking you on a journey through 5,000 years of Chinese culture. Its stunning beauty and tremendous energy leave audiences uplifted and inspired,” according to the Shen Yun website.

New York-based Shen Yun made Dan Curran, president and CEO of St. Louis-based 4ORCE Digital, feel uplifted and great. “I think that the discipline, beauty, and just the overall positive nature of it has been really refreshing, is excellent,” he said.

He attended the afternoon performance with his wife, Katie, and their 9-year-old daughter, Katherine. “My wife and daughter all enjoyed it.”

Mrs. Curran, a real estate agent with Janet Macavee Inc., said that she found Shen Yun to be educational—not only culturally and historically—but also spiritually, in learning the beliefs of the traditional meditation group Falun Dafa.

What is touching about Shen Yun, said Mr. Curran, is “it’s gentle and the point they are trying to make is universal—kindness, forgiveness, beauty, appreciation of life. Definitely you will leave here feeling much more optimistic and feel happier.”

The feel good dance for Katherine was Mighty Monk. According to the program book, this mini-dance tells the story of junior monk whom the other monks laugh at because he lacks martial arts skills—that is, until he eats a bowl of magical meat.